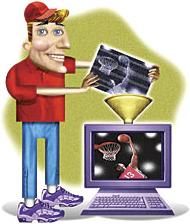 If you’re like most video editors, you’ll have occasion to edit footage that someone else shot. For many editors, this can be a harrowing experience. After all, your reputation as an editor is on the line. You have no control over the quality of the footage you receive, but you’re committed to putting your name on a first-rate finished product. You may get lucky. Maybe you’ll receive footage that looks and sounds pristine. But, come on; let’s be realistic. When you agree to put together a video yearbook for a junior high basketball team using nothing but clips of home video, you shouldn’t expect stuff that looks like it was shot for ESPN.

So what do you do when turning out a crummy-looking video isn’t an option, but all you have to work with are… crumbs? When handed shaky, sloppy, poorly-shot footage, apply the following time-tested post-production tips and tricks. Let’s use the video for that junior high basketball team to illustrate just how they can work.


Shake it Up, Baby

One of the most common problems with editing amateur video is shaky, handheld footage. Most of our basketball game footage, recorded from the top of the bleachers, incorporated a telephoto setting. Other shots were taken at floor-level, where the camera operator zoomed-in to the far end of the court for a series of close-up shots; the camera swooping left and right to highlight each player as she ran up and down the court. The footage from both locations was shot slightly off-level, adding a precarious tilt to the floor.

One of the best ways to smooth out shaky shots is to add a strobe effect when you edit. To create this effect, add a strobe filter (called "Posterize Time" in Adobe Premiere 6.0) in your editing program, or run your footage through an external time base corrector (TBC) with a strobe feature. The strobe essentially holds some frames on the screen longer and skips over others. This reduces the impact of the jarring shakes and creates an artsy effect. Often, the shakier the raw footage, the better it looks when strobed. This works extremely well when editing montages and highlights set to music. So, don’t throw away that shaky footage. Strobe it and use it to create a cool music montage. I’ve even used this technique on a commercial or two shot by "professional" camera operators.

A slow-motion effect can also smooth out shaky shots. Simply apply a speed effect in your editing program. The slow-motion effect does not eliminate frames, however, so your viewers will still see all of the camera motion. And bear in mind, speed effects will alter the speed of the accompanying audio. This is not a problem with strobed clips. Don’t discard the slow-mo altogether. There is a better use for it as a patch for bad footage.

Go to the Slow-Mo

Editors always prefer to have more footage than they need. If you need a one-second shot, you like to have 10 seconds of footage to choose from. Unfortunately, amateur shooters don’t typically think like editors. The footage that you get may not be exactly what you had hoped for.

The slow-motion effect is the answer when a shot has been clipped too short. I wanted a good shot of the coach in the basketball tribute, but there was only one shot of his face, lasting just a fraction of a second. A slow-motion filter allowed me to stretch the 10-frame shot to fill two seconds. If you watch closely, you’ll see this trick used regularly on television news programs. Whenever footage is lacking, the slow-mo is called-upon. In addition to filling time, slow motion adds drama. Footage seems larger than life when it is shown in slow motion.

Much of the basketball game footage was shot with analog camcorders in poorly-lit gymnasiums. The resulting footage was marred by darkness, grain and video noise. Some of the footage had been copied to VHS before delivery, adding even more grain due to generation loss. In this case, the answer was a black-and-white filter effect.

By removing the color from low-lit shots and grainy, poor-colored footage, a clip will take on an old-movie look. Simply apply a black-and-white filter or use your color-correction tool to remove the color saturation and create a monochrome. Adding back a single color can enhance the effect. Tint your footage blue, red, green, purple, brown or whatever color enhances the footage. In addition to concealing grain, black-and-white footage offers a nostalgic look and feel. In the context of a video yearbook or wedding reception, black-and-white footage can increase the feeling that the viewers are watching something retrieved from their memories. The black-and-white effect is especially powerful when the sound is muted and the clip has an added slow-motion or strobe effect.


Blue in the Face

Color quality is another common problem you may encounter when editing amateur-shot video. You might find that a submitted video had an improper white balance. While many camcorders default to an automatic color balance mode, others require that the user select an indoor or outdoor mode or set the white balance manually. Outdoor shots recorded with an indoor white balance setting will produce images with a strong blue tone. Indoor shots recorded with the camera on an outdoor setting will produce images that are toned overly red. Some camcorders have a difficult time recording accurate colors under fluorescent or mercury vapor lights, skewing the color quality. This was the case with much of the basketball footage.

Most editing software offers some kind of color-correction control. To access this, highlight the clip, open the video options, then select Color Balance. This will open a control panel that allows you to adjust the color balance of the clip’s red, green and blue (RGB) tones. With a little tweaking, you should be able to diminish most of those unsightly color problems. The color-correction feature is also handy for matching the color of footage shot of the same event by two mismatched camcorders.

Some editing programs (like Applied Magic’s Screenplay) let you adjust the white balance of a clip after it has been captured for editing. By clicking a color selector on a white object in the frame, you can tell the software what to use as a white reference. The software then re-calibrates the other colors to match. Check your manual to see if your editing software has this feature.

Chances are the home video you received as source material has a wretchedly poor soundtrack as well. The on-camera microphone records good sound only when it’s placed within six or eight feet of a subject. If you are given a wedding video recorded from the back of an auditorium, the sound will be weak, thin and distant. Echo and reverberation will further plague sound recorded in large, "hard" rooms like gymnasiums.

If the video you have to work with has a weak soundtrack, you have a few options. The first to consider is the elimination of the audio portion of the clip altogether. Do this by muting or deleting the audio that accompanies the video in your editing interface. If the audio is primarily ambient, like a cheering crowd or the sound of a bouncing basketball, this is an easy call to make; the viewer will never miss it. While you’re at it, eliminate the accompanying audio from all the clips in your sequence and add an appropriate music bed to create a musical montage of highlights. Your video may look and feel more professional without the original soundtrack.

If the accompanying audio is crucial to the scene, you might try to sweeten a bad sound track with your editing software’s built-in equalizer. While you won’t be able to achieve aural perfection, you will be able to lower air conditioner noise and accent or raise the crucial content like a voice by adjusting the high and low frequencies. In most editing software, the EQ is accessed by highlighting the audio portion of a clip, then selecting the audio options. Try several adjustments until you achieve the best quality possible.

It Ain’t So Bad

The moral of the story: don’t settle for less than the best. With a little bit of creativity, even the worst footage can be dressed up and made into a presentable project. Sometimes turning video trash into visual treasure can be more fun than editing perfect footage, and often the result is far more artsy and interesting. So now’s the time to stop editing poorly-lit, grainy, bad-sounding clips into your productions. Work with them and use them to your advantage. Take a little time to apply these techniques and turn those crumbs into coffeecake.