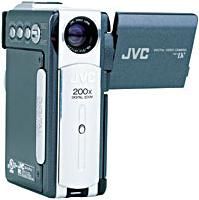 About five years ago, JVC started an apparent race for the "world’s smallest" camcorder with a DV model that looked something like a cross between a cigarette case and a miniature, high-tech James Bond spy device. Since then, JVC, Sony, Canon and others have been locked in a production battle to claim the tiniest, full-featured DV camcorder. This year’s entry from JVC is the GR-DVP3 a small, solid unit that combines powerful digital still image capture capabilities, editing features and a decent picture with a few awkward aspects of operation. Its target market is the casual shooter who prefers compactness to ease of use, and who would like a powerful digital still camera combined with a high-quality DV camcorder.

To test the GR-DVP3, we took it to a high school graduation ceremony, where we expected its compactness and still-image capabilities to be beneficial. Here’s how the test unit we had fared under those circumstances.

With the GR-DVP3 held in the right hand, and the 2-inch LCD monitor flipped out, the unit allows access to some, but not all, of the camera’s major controls. The right-hand thumb controls the record button, as well as a spring-loaded circular zoom control. Operation of the zoom control was difficult at first, due to its awkward position. The zoom wheel, however, is responsive to a light touch, and offers a number of speeds.

Zooming in to catch a few pictures of specific graduates validated the usefulness of the extended digital zoom to reach beyond the modest 10:1 optical offering. It also proved the need for the unit’s digital image stabilization, accessed only through a difficult series of menu choices. If JVC wants to capture the point-and-shoot crowd with this camera, it will have to make some of its essential controls easier to access. The GR-DVP3 does have a fully automatic mode available, but strangely, this mode does not include image stabilization. Furthermore, the menu that displays this feature isn’t even available unless you switch over to manual mode.

The unit’s flip-out LCD monitor, while small, was adequate, even in the bright sunlight that blasted the grads (and their families and friends) in the early evening. In addition, the automatic exposure control was very quick to respond to changing conditions.

High-quality digital stills are very easy to shoot with the GR-DVP3; all it takes is a quick press of the snapshot button. Also, it was a simple matter to add one of the unit’s built-in sound effects while shooting (or even later on after the shooting was over).

Though the GR-DVP3 includes many features designed to aid those who prefer in-camera editing (such as sound effects, digital effects, fades, wipes, etc.), there are also a few features designed to help those who are interested in selecting shots for recording onto another tape. JVC’s tried-and-true Random Assemble Edit feature, along with its JLIP control port, combined to make copying selected scenes to a JLIP-equipped JVC VCR a simple matter. Also very handy was the unit’s easy-to-use USB port for transferring images from the camcorder’s 8MB flash memory card to a computer. (Note: both of the aforementioned features are only accessible via the included docking station, another feature that JVC has perfected over the years.)

The inclusion of a headphone jack to monitor audio is a good thing, but the absence of a microphone jack is a notable omission. The built-in microphone’s resulting audio quality is excellent, but still pales in comparison to the freedom of moving an external microphone closer to the source of the audio.

The GR-DVP3’s image quality was adequate for a DV camcorder; it sits in the middle of the pack when compared to the image quality of most other DV video cameras. The quality of the digital stills, however, was excellent.

The Big and Small of It

As stated in the introduction to this review, the GR-DVP3, which can easily slip into a shirt pocket, is best suited to those who value compactness and digital still-image functions over the capabilities of a full-featured DV camcorder. It’s a little expensive for what you get, yet the quality of the stills it captured was sufficient to keep high school graduates, and their parents, happy and proud for years to come. Meanwhile, let the Mini DV battle to be the smallest camcorder carry on.