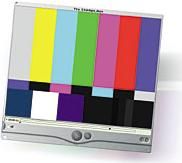 
This letter concerns the Video Out column "Eleven Easy Steps to Streaming" in the Videomaker, January 2001 issue. Just because something is possible does not mean it should be done. Streaming your precious video over the Web is akin to a painter taking her work of art and tearing the canvas into a million tiny pieces, then throwing it out the window for the "world to see." That is no way to view a painting, and streaming video is no way to view video.

Every major motion picture group on earth posts trailers for their new movie releases on the Web, and not one of them uses streaming to do so. Think about it, for the same time and bandwidth it takes to make streaming video look barely passable, your viewer could have downloaded a much better-looking 15-frame-per-second full-screen video.

Encouraging your readers to destroy their beautiful video works by streaming them over the Web is shameful. They can reach a much wider audience with much more impressive representations of their work by using state-of-the-art downloadable video compression techniques.

History of the (Video) World

In the January issue of your magazine there is an article on page 95 regarding the history of video recorders and cameras. You say that the Sony VX1000 digital camera was the first DV camcorder (1995). I hate to disagree, but the Panasonic EZ1 was the first DV camcorder. However, the Sony VX1000 and the Sony 700 were the first cameras that had built-in FireWire. The Panasonic had no FireWire, but it was certainly DV.

How ‘Bout those Laptop Video Editors?

I love your magazine, it’s been a real help! But I would really like to see an article about digital video editing on laptops, and more specifically PC laptops. For 95% of applications, a laptop can work just as well as a desktop, but I don’t know if they are at the same level for video editing. I’ve just seen a PCMCIA FireWire capture card advertised, and am wondering if there are similar products available and what their strengths and weaknesses are. I’m particularly interested in laptop editing because I travel abroad frequently and would like to have the capability of creating videos to show to clients. Laptop editing opens up an entire range of video projects.

You’re in luck, Andy! Check out page 50 for our Buyer’s Guide on laptop video editors.

Great article on the JVC HR-DVS1U! We purchased the deck a couple months ago, after reading about it in the January 2001 issue of Videomaker.

It took a while to learn the basic set-up and operations. The manual isn’t very detailed, but it does offer basic guidance. The best way to learn it was to experiment. While your article covered some great features of the deck, it missed some very important ones. There are quite a few uses even JVC’s support department doesn’t know about. The best thing I found was that I can record directly out of my G4 to VHS through a Sony media converter. I run a line out of the deck into the media converter, switching the "mode set" on the deck to Output 1: DV. Then I run a line into the rear auxiliary input (line 1). This took some experimenting, but it works great.

You can also record a VHS dub, and Mini DV at the same time this way. It takes some quick switching between the decks, but it works just fine. For clients that I’m editing with, this saves a lot of time when it comes to tape creation.

What I dislike the most about the deck is the front port must support the FireWire line. There’s no back FireWire plug. I keep my computer plugged into the deck all the time…this means that I have to watch for dust build-up.

Thanks for the great article.

We failed to include a byline for Hal Robertson in the April 2001 Videomaker Sound Advice column. Robertson, a professional video sound producer, contributed to the article which highlighted microphone types and miking techniques.