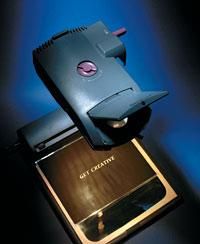 Most video titles these days are built using computer programs that have options that don’t seem nearly as infinite as the time it takes to learn them. If you’ve reached a roadblock with your titles, don’t have titling software or you just want to create a new look, then we have a creative solution that uses old technology in a new way. You can create fun and unique titles for your videos with an overhead projector. It is a device that has few limitations and produces a variety of great titles with unique effects.

Projected images have been used for titles for years, but with our focus on new, exciting gadgets, it’s easy to forget the vast range of options already available.
Transparent Tests

For our tests, we created two different transparencies of the same title, one with black letters against a clear background, the other with clear letters against a black background (see Figure 1). To do this, we created a title in a word-processing program (Microsoft Word) using a thick, bold font. Then, we used a copier to transfer the title onto an overhead transparency. Our copier has the capability to reverse the image so we copied the same title twice, once normally, then a second time using the negative image function.

The real fun began when we moved an overhead projector into our studio to test the overhead’s capabilities.

We scoured the studio for different flat, textured surfaces to project our titles onto – wood, brick, reflective cloth, window blinds – whatever we could find, we used. Everything we tried looked good with one added benefit: the more texture the surface had, the less visible the minor flaws in our photocopied transparencies. It became obvious that our results improved as we tried ideas that were more experimental. So we abandoned the flat surfaces entirely and started projecting our titles onto whatever random things we could find. Near, far, big or small.


Draped fabric and curtains gave both transparencies an attractive look and were the first and perhaps best examples we found of surfaces that look great when you move the projector (see Figure 2). The title distorts with the fabric as it moves, giving a nice rolling effect that would be hard to duplicate with a graphics program.

Sets, Signs and Such

In the next logical stage of our testing, we took the overhead outside. We found an outside plug and discovered that, although it doesn’t work well in direct sunlight, the black-lettered transparency with the clear background looked just like a stencil when projected onto a wooden crate in the shade (see Figure 3). This could prove to be an inexpensive way to create set elements without permanently marring their surfaces. With a little creativity you might project graffiti onto a wall or a logo onto the side of a vehicle.

Our most experimental test was conducted on the forehead of a person (see Figure 4).

We’ve only begun to explore the creative possibilities of the overhead projector as a titling machine. You can place a title wherever you can find an electrical outlet. The possibilities are endless.

Don’t be tricked into believing that your computer is the only way to create titles for video. There are many fun, creative, low-cost alternatives to creating great-looking titles.