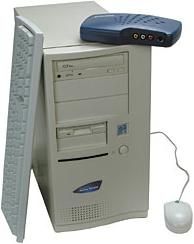 DVS Direct ships a ready-to-use video editing computer that bundles the Matrox RT2000 (as both a digital and analog capture solution), and Adobe Premiere 5.1 RT. running under a modest 650MHz Pentium III (at press time this base system will house a 750MHz Pentium III). The RT2000 handles real-time video and effects in Adobe Premiere very well. Intermediate editors in the market for editing solutions would do well to take a closer look.

Setting up was very easy. Within 15 minutes, we had launched into Premiere and starting our test of the system. Plugging in the breakout box cable and standard computer connections was the extent of the wiring configuration. The well-designed RT2000 breakout box sits on the desktop without taking up too much room. Inputs on the breakout box include: unbalanced analog audio (RCA), S-video and composite video (RCA) I/O provided. The FireWire port is located on the card at the back of the computer itself. The RT2000 also comes with the Matrox Millennium G400 graphics accelerator card along with the separate RT digitizer/capture card.

We first connected a Canon Elura 2 MC to the FireWire port and after setting up machine control of our 1394 device, we heard the camera respond to the activation of the machine protocol. When we tried to shuttle the camera we got no response from the device. We talked to DVS Direct and they felt that we had a driver problem. Our test machine was set up to control Sony devices. We received an update driver via E-mail. The RT2000 uses the standard Windows drivers for machine control. The driver to fix our test system ships with the latest Windows versions, so this should not be a problem if you decide on DVS and one of their RT2000 systems. After we updated, we batch captured a list of shots from different places on our stock footage tape, making the system shuttle back and forth, to complete its task. The system performed with crisp efficiency and the captured footage looked great. We next used the provided Sonic Foundry Acid Music to capture audio from the CD-ROM which worked well (any software added to a bundle with the Sonic Foundry name attached to it seems to be a sure bet).

The RT2000 and Premiere 5.1 RT seem to be a very good match and performed well in the editing and FX departments. We edited a two minute sequence together with a variety of the Adobe and Matrox effects as transitions. The Matrox folders of effects house 2D/3D DVE, Organic Whips and Page Curl sub-categories. There are many gradient wipes that, we are surprised to say, are very usable. The curls and DVEs are only marginal for the use-more-than-once column, but they are real-time and the system seems to excel at living up to this claim.

One of the most attractive aspects to the Matrox RT2000 is Inscriber Title Express that comes with the board set. This is a very tweekable and clean titler that adds a lot of graphic punch to this system. Accessible to the graphic beginner yet deep enough to give the experienced user enough to satisfy Inscriber TE can give a project a pro look with little effort. Not being able to view video under your title for reference as you are composing is the only drawback that we found with Inscriber. Without being able to see the underlying video while building your title, you have to guess about placement and rely on trial and error. At least we could not find the trick to this feature by hunting or in the electronic reference guide. If this is not the case and in fact this titler can achieve this feature (not finding something software can do in the reference material is not such a surprise), then we give Inscriber TE full marks.

Gently introducing DVD authoring with Sonic Solutions DVDit to the consumers of the RT2000 kit is a fun plus. You won’t be able to write a real DVD without additional hardware, you will, however, be able to write a video CD with a standard CD-R that will give you some practice for when we all can afford to burn ’em like the big boys.

If you are educated enough to know what you desire in an editing computer, then DVS Direct may be the vender to help you build your turnkey. The RT2000 works well with the Adobe RT and lives up to the real-time claim with the preset effects and video playback. The software bundle is healthy and makes this system attractive for the price. Configure yours at will.