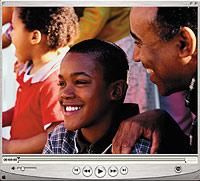 Whether you want to send video e-mail to friends or post video clips on a Web page, you’ll get the best results if you shoot with streaming in mind. If you’ve watched streaming movie trailers online, you’ve already noticed that even the finest cinematography suffers from jerky motion and poor resolution when compressed for Web delivery. Just because your video is good doesn’t mean it will stream well. Here are five tips to help you produce better quality streaming videos.


Always use a tripod to keep camera movement to a minimum and preferably still.

Full-motion full-screen video has to be drastically compressed for Web streaming. Areas of the video frame that don’t change take up very little data space because they can be repeated over and over until a change occurs in that portion of the picture.

As an example, consider an interview situation. With the background static and the person speaking providing the only movement in the shot, the compression program is able to keep up with the slight changes in the overall data (e.g. movement of the person’s face and gestures). The result is much smoother streaming video.


Well lit shots cut back on grain, making the image easier to compress, easier to send and easier on the eye of the Web viewer.

As strange as it may seem, you will want to use bright lighting for roughly the same reason as limiting movement in the frame. Grain (also known as noise) in an image is seen as motion to compression programs, eating up file space and resulting in degraded images. A simple, stable, grainy image can be as difficult for a compression program to work with as a complicated image with lots of motion. Good looking streaming video requires that you shoot well-lit raw footage.

It is best to frame your subject large in

the frame. With streaming video, not only is the image heavily compressed but usually it only occupies a small portion of the viewer’s screen. If you want viewers to see your subject, you’ll need to shoot in closeup.

If you keep the camera positioned back from the talent and zoom in to establish tight framing you will at the same time narrow the focal length of your lens and throw the background out of focus. This blurring of the background helps compression by lowering the complexity of the image, which will improve the quality of your stream.

4 Use a plain background


Shoot your subject against a simple backdrop to keep the image as uncluttered as possible.

The more detail there is in the background, the more problems there are in streaming compression. Not only does a busy background impose more information to be compressed, but also it might be difficult for viewers to discern in a small playback window. Horizontal lines like window blinds or striped clothing can create annoying artifacts in full resolution video and the effect is only exaggerated when compressed for streaming purposes. A plain wall with colored gel lights tastefully shone on it can greatly improve your streaming Internet video production.


The final word on streaming video keep it short.

The file size is smaller, easier to handle, less likely to undergo problems while streaming and is more likely to be watched by the viewer. Use your own Web surfing impatience with file downloads and streaming video as a benchmark for your own offerings.