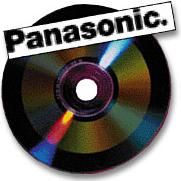 One of the big announcements from CES 2001 in Las Vegas was Panasonic’s new VDR-M10 DVD camcorder. The VDR-M10 records digital video and still images onto removable three-inch optical DVD-RAM discs. Also announced was the Panasonic 2.4GB recordable DVD disc. Both are scheduled for release this spring. There were no prices available at press time.

Panasonic says the VDR-M10 should make disc navigation and editing simple by allowing instant access to recorded scenes without searching. Initial images of video scenes are indexed and displayed as thumbnails. When beginning a new recording the camcorder automatically finds blank space on the disc.

According to Ballmer, the Windows Media Audio and Video 8 digital media compression technology crosses the 500Kbps threshold for delivering near DVD quality video over the Internet. This is good news for videographers who aren’t satisfied with the low resolution and poor image quality associated with present streaming video options.

During his keynote address, Ballmer also highlighted a pioneering step by NTT DoCoMo, a leader in wireless Internet, that will bring streaming media to the wireless world.

NTT DoCoMo has launched a commercial service that uses Windows Media to deliver streamed audio and video to cell phones. The Eggy, which allows cell phone users in Japan to watch short videos and to capture video images via a high-speed Personal Handyphone System network, was recently demonstrated.

worldwide in the next few years.

MGI Software Corporation has announced a new licensing agreement with Sony Corporation which allows MGI to supply versions of its popular PhotoSuite and Video- Wave 4 software in multiple languages with the new line of digital video Sony Handycam Camcorders.

"We have always maintained that our commitment, partnerships and investments in Japan would be strategically significant," said Anthony DeCristofaro, MGI

President and CEO. "This agreement verifies that commitment, as it expands on the existing relationships we have established with Sony over the years."

Mac and PC versions of CineStream are scheduled for release in the first quarter of 2001 with an expected retail price of $499.