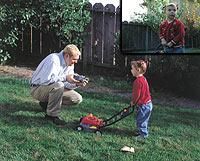 When you pick up your camcorder, do you feel like you’re all thumbs? Don’t feel too bad; technology can often be unnerving, and the fact that your camcorder captures all the mistakes you make as a rookie videographer probably doesn’t do much to boost your confidence.
When you’ve got butterflies about shooting footage and doing it right, just take a deep, cleansing breath and understand that thousands of people have gone before you, shooting miles of tape with a myriad of mistakes littering their footage. Practice makes perfect though, and it is easier still to achieve perfection when you know some of the common mistakes videographers make, and understand how to avoid them.

Video, by design, is a full-motion medium. However, one of the most common mistakes videographers make is purposely injecting too much motion into their videos. The easiest way to abuse your motion privileges is by walking unnecessarily with the camera. If you are sitting down or leaning against something your body can be a relatively stable camera support. It’s not so stable, though, that you can walk around with your camcorder without injecting jitters into your footage. Shoot this way and your footage will look as if you shot it during an earthquake, leaving your viewers reaching for the Dramamine.

Another way that video greenhorns abuse the use of motion in their programs is by zooming in and out unnecessarily. Zooming is a great way not only to magnify a distant object but also to draw attention to details in a shot that the viewer might otherwise overlook. There is a temptation, therefore, to shoot a wide establishing shot, zoom in on a detail for a few seconds, zoom back out, zoom in on another detail, zoom out, and repeat this process over and over ad nauseum (quite literally). While you may feel as if you are doing the audience a service by highlighting the real meat of your shots, what you are actually doing is distracting (and even irritating) them with your incessant zooms.
It’s important to choose your zooms wisely. Try to prioritize what’s most important in your shot and only zoom in on those things. When you do zoom in, hold your zoom for several seconds. Give everyone enough time to take in your shot before you zoom out. If you feel the need to zoom back in, put the camcorder in pause, then zoom and start recording after you’ve framed the tighter shot. Remember, when using the zoom, let temperance and patience be your guide.

Because we use our eyes to survey our world, everything we see is at eye level, by default. It is natural to shoot the majority of your footage from this vantage point because the act of videotaping an event usually requires us to stand. However, consistently shooting footage at eye level means you’re missing a world of creative camera angles.
Try shooting some of your footage from a low angle, for example. If you shoot a subject from a low angle, you can make it look bigger than it may actually be, or more imposing, even intimidating. Even a child can look like a giant shot from below.
By contrast, if you shoot from a high angle, your subject will appear small and less. Such an angle makes your subject appear vulnerable or fearful. The bottom line is that different camera angles make for more interesting video.

Having a lot of light at your disposal while shooting a scene may sound like a good thing. It is, except for those circumstances in which more light is coming from behind your subject than in front of your subject. Such situations occur when shooting someone in front of a window, or rolling tape when the sun is low in the sky behind your subject. In these cases, the light coming from behind, called backlight, is so intense and so directed at your camcorder’s lens you will end up shooting a silhouette.
To deal with this situation, you have three choices. First, most camcorders offer functionality, activated with the press of a button, which compensates for scenes with too much backlight. It will electronically overexpose the backlight so that more of the light in the foreground can be "seen" by your camcorder. You will lose definition in the background but the foreground subject will be more discernable.
Second, you might turn on some lamps to add more light to the front of your subject, compensating for the intensity of the backlight so that the subject is no longer in silhouette.
The third and final option is probably the easiest and most effective. Simply reposition yourself or the subject a little so the bright backlight is no longer a problem.

Don’t you hate it when you pick up your 35mm film from the local drugstore only to find those two or three pictures you didn’t intend to take? You know, those shots of your feet or the ceiling. Those same unwanted shots can show up in your video footage – in far greater numbers – if you aren’t careful about monitoring whether or not your camcorder is recording at any given time.
Because you control your camcorder’s recording ability with the simple press of a button, it’s easy to forget to stop recording when shooting is finished. It’s important to actively check whether or not the camcorder is still in record when you are between shooting scenes or finished shooting for the day. This is as simple as double checking the viewfinder, which will often report to you whether or not your unit is recording. If you are notoriously forgetful about taking your camcorder out of record mode, teach yourself to actually power the unit down when you are not shooting. That way you can be sure that you’re not recording footage you don’t really want.

Auto Mode all the Time

Today’s camcorders can make you a lazy videographer, if you let them. That’s because they are designed to do everything for you. They focus, adjust exposure and color calibrate. These automatic features are real time savers, and they make it easy for you to get good footage without being an expert cameraperson. However, automatic everything is not always suitable for every situation.
For example, low light conditions can confuse the heck out of your camcorder’s autofocus. If you are shooting in candlelight, your unit will drift in and out of focus desperately trying to find something to focus on. In situations such as these, don’t be afraid to turn off some of those automatic features and take control for yourself.
Autofocus, for example, deactivates with the touch of a button. Turning off auto-exposure lets you take control of how much light enters the lens. Deactivate auto-shutter to tell your camcorder how best to catch high-speed action.
Then, after you have met the demands of your unusual shooting environment, turn those automatic features back on for conventional shooting.

Think you’ll ever be completely comfortable with your ability to shoot good video? Of course you will. That’s not to say you won’t make mistakes, even some of those mentioned here. Don’t fret, though. Over time your mistakes will become less frequent, and along the way you will learn more about how your camcorder works, and how to make it work for you in the creation of outstanding video.