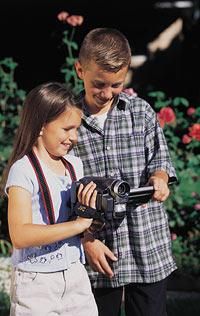 You would like to play a game with the kids, but you’re not quite sure what to do with the camera. Then you remember this article. You remember it because we are about to list six great ways to combine kids, camcorders and fun. Along the way, we’ll share tips to help you make kids feel more comfortable under the gaze of the lens.

Children have different reactions to the blinking red light, ranging from overly congenial to downright scared. Let’s pretend that these kids are a bipolar pair – Johnny is jumping all over the place for you, a born performer, while little Veronica is hiding behind her mother’s pant leg.

The best way to deal with camera shy children is to approach them with the camera at your side rather than up to your face. Kneel down next to Veronica. Make eye contact with her and ask her if she would like to look through the viewfinder. Hold the camera so Veronica’s eye is looking through the viewfinder, and ask her if she can see something – perhaps Aunt Martha standing over by the barbecue.

Kids are camera shy only because they are not quite sure what the heck a camera is for. Let them know by showing them exactly what you see.

As for Johnny, tell him that if he’s zipping all over the place you won’t be able to follow his motions very well. Try to calm him down a little. Though a few clips of his hyperactivity might be fun to have, he will be less receptive to your direction during the following games and exercises. Here are six ideas to try out at your next family gathering.

Around the turn of the century Georges Melies wowed French audiences with the film tricks he developed. Melies discovered that if he stopped rolling the camera, changed the elements of a scene in some way, and then resumed rolling camera, it would seem as if objects appeared, disappeared and changed positions on their own.

Today this concept is fairly elementary to those of us who understand the basic principles of video. The only difference between now and then is that you don’t have to wait a few days for the film to be developed in order to see the results of your magic trick. You can flip open the screen, go to VCR mode, and play it back for Johnny and Veronica right there on the front lawn.

Tell Johnny to stand in front of the house and wave. Press record. Now stop recording, being sure you do not to move your arm or change the frame. A tripod and remote control will help, but aren’t absolutely necessary.

Now, tell Johnny to move out of the frame and resume recording. When you play back the image, the cut that happened when you stopped recording will be masked because you didn’t move the camera – the only change will be that Johnny is there one moment and gone the next.

It’s movie magic. Kids love it. There is plenty of room to be creative with this exercise: perhaps when Johnny moves out of the frame next time, you’ll put Sparky the family dog in his place. On playback it will look like Johnny turned into a dog. There is no evidence that this type of trick scars children for life, but there is plenty of evidence that proves they get quite a kick out of it!

When Veronica and Johnny want to take a break from the disappearing act, it’s time for them to scale a mountain.

By keeping the camera low and perpendicular to the ground (whereas in normal shooting it would be high and parallel) you can create a vertical mountain slope in the frame. Have Johnny and Veronica crawl along the ground, struggling and sweating as if they are mountaineers. Play it back and watch them giggle at how funny it looks. For added impact, cut the shot together with a picture of a snowcapped mountain, you probably have one on the calendar hanging in your kitchen.

Once they’ve climbed K2, Kilimanjaro and Everest, maybe it’s time for an incoming news flash. There are plenty of characters at this barbecue for Johnny and Veronica to interview. Give them a hot dog for a microphone, or better yet, a real microphone, and let them choose the subject matter. Interview Uncle George about his famous guacamole, or Aunt Martha about her cooking technique.

Perhaps the kids have a favorite film or television show. Let them act out skits from the show: favorite episodes, dialogue exchanges or even fresh improvisations. Having them write down their skits is always a good idea. That keeps them focused and gives it a better chance of having a beginning, middle and an end.

These games can last for hours. The main point to keep in the back of your mind, however, is that every time Johnny and Veronica see themselves on the video screen they are gaining more confidence in themselves and their relationship to video.

Although it may take days of planning to shoot a minute-long action sequence for the big screen, you can do one with Johnny and Veronica in a small fraction of the time thanks to a rudimentary editing system and a little improvisational skill.

A chase sequence is a good choice for many reasons: it offers plenty of cutting possibilities as a result of constant action, it involves action but not fighting (kids, especially boys, will often gravitate towards wanting to fight in front of a camera), and it will get the kids moving rather than standing around. They will enjoy shooting the sequence, and the editing will be the icing on the cake.

How you do the chase is up to you. The greatest thing about video is that you can shoot a lot of footage in a very short time, and since your naturally-lit, somewhat shaky, improvised material isn’t going to be seen by many other people (unless you happen to be the makers of

If the kids are old enough to handle the camcorder themselves (see Coming of Age sidebar) you can play the "I Spy" game – name an object, and let them try to find it without taking their eye out of the viewfinder. Or, spend a few moments and come up with a video scavenger hunt list. Throw in a twist by modifying how you want each object to be shot. For instance, "Close up of Aunt Martha" or "Low angle of the swinging tree." The possibilities are endless.

If you remember the way you approached your first camera with curiosity, caution, and excitement mixed with a proper awe then you understand what is going through Veronica’s mind when she puts her hand through the camera strap.

And if you remember the way you were as a kid interested in everything, full of ideas, constantly inspired then watching the footage Veronica or Johnny shoots will make you smile.

The best way to see through a child’s eyes is to give them a video camera. If you’re not comfortable with that, you can make use of some of the suggestions offered here to make them the stars of the show. Either way, there are great ways to involve children and do your part to pass the love of videography on to the next generation.