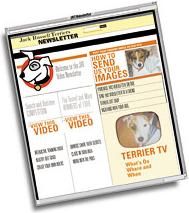 
A few months ago I read Matthew York’s editorial (See Viewfinder in the December 1999 issue of Videomaker) about creating a video newsletter for the pedigree of his dog. At first glance I said to myself, "Not in this lifetime," and I placed the idea in the back of mind with other intriguing ideas that may never come to fruition.

About three weeks ago I created a video promo for the karate school where I teach. I included some background info about the style of karate, recent tournament results, upcoming events and some old 8mm footage that was converted to video years ago. After the head of the school saw the tape, he asked for 10 copies and one "continuous reel" version. I produced what he asked for and never thought about it again.

More recently I learned he had sent the tapes with copies of a printed newsletter to the heads of other affiliated karate schools. A few of these instructors contacted me and congratulated me on my video and asked when the next edition would be available. That was the rub.

I had created and produced a video newsletter without actually realizing it. I re-read your article and recognized where your ideas had laid the foundation for my video. Thanks for the idea.

Leave Video to the Pros!

WOW! I have never heard of your magazine before, so I bought the May 2000 issue. I can’t tell you how disappointed I am in it. Reading through the whole magazine, I felt a certain tone. A tone of oversimplifying. Robert Nulph & Chuck Peters sum up the tone that I was feeling in one sentence on page 67: "Anyone, who can open a cardboard box, can edit video".

I guess a monkey can replace all my producers, editors and animators then. I have very big news for you. Just because prices have dropped down to the consumer level and people can buy $200 software packages and stick them on Sears closeout-special PCs, doesn’t mean they can truly edit video. You conveniently forgot to mention talent and creativity in your article. Or I’m assuming that you don’t think people need that.

Your magazine is giving a false impression of how videos are made and because of organizations like Videomaker, we will be seeing even more horribly written, storyboarded and produced TV commercials. But on the other hand, you will make us (video professionals) look even better than before.

Do your readers a favor and give them a balanced perspective on this industry. Right now you are lying to them. If you want to see how video is really produced, call me and I’ll send you a demo tape.


Thanks for your letter, Dustin. Believe it or not, we’ve never heard of you either! And reading through your letter we too felt a certain tone. A tone of superiority, of elitism and of snobbery. We smelled something too. Fear. A fear that others, "amateurs", will discover how simple editing can be and start producing their own videos instead of paying people like you to do it for them. Worse yet, that one of these amateurs might under-bid you and steal away one of your clients!

We don’t argue that technique is important. Each issue of Videomaker contains columns designed to teach readers the "art" of making video. Each month our columns are packed with techniques on camerawork (Getting Started), editing (Edit Suite), audio (Sound Track), lighting (Light Source) and distribution channels (Video Out).

We didn’t mean to threaten you. But if you are threatened by the idea of regular people editing video, you’re in for a surprise. With a little training, a digital camcorder and some inexpensive editing gear, any of our readers can produce broadcast quality video at home.

Many people already have talent and creativity but feel road-blocked by technical jargon and an elitist attitude that "professionals" employ to discourage them from encroaching upon their turf. Others who may not have the natural talent or creativity, can learn. The cream will rise to the top.