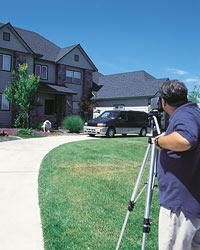 The production footage of a professional director is like a racing car in a kit. Though there are thousands of parts to assemble, every last nut and bolt is present, beautifully finished and shaped for a perfect fit. Amateur footage can be more like a wrecking yard: a skilled mechanic might improvise a jalopy out of scavenged parts but it aint gonna win any races.

Directing like a pro means designing and fabricating the hundreds of shots in a video shoot so an editor can assemble them smoothly. Though the details may be fearsomely complex (say, in a film like Titanic) the basic principles are simple.

But first you must recognize that youre not building the racer as you shoot. Instead, youre machining parts for the editor to assemble in post production. Professional directors start from the premise that a program is not a straight documentation of its content. Instead, its a synthesis, a construction of small pieces that create the illusion of a seamless whole because they fit together so tightly.

Think of it this way: when you tape a real-time event like a ball game, youre simply recording what happens. Editing in this case means weeding out the bad stuff. But if youre shooting a scripted program, youre creating "what happens" one piece at a time. Editing a scripted program means picking and assembling the good stuff from scratch. Most documentary editing is subtractive; other professional editing is additive.

With that crucial difference understood, youre ready to consider the three Cs of shooting for the edit: coverage, continuity and cutability. With these principles as guidelines, you can create all the components of an Indy 500 champion.


Coverage means giving the editor enough material to cut with. In order to provide this coverage, you need one other C: completeness. Its amazingly easy to omit things by accident, which often happens because shooting is so fragmented. It may seem obvious, but hey, dont tape a prisoner opening his cell door without showing where the key came from.

Beyond the obvious goal of completeness, coverage means overlap and repetition. In overlapping action from one setup to the next, you allow the editor to start the incoming shot precisely where he or she has clipped the outgoing shot (see Figure 1). Since the action continues across the cut, the uninterrupted flow conceals the edit.

Its not enough, however, for the editor to start shot B just any old place before the end of shot A. As the director/camera operator, you need to pre-visualize good edit points in the action as you stage it, so that at least one or more are built into both shots. If a character snatches a letter from a table, theres probably one edit point just before she reaches for it, a second point just before she lifts it and a third point as she begins to open it. Covering all three moments in both the A-roll and B-roll increases the editors cutting options.

Most professional directors go so far as to repeat entire beats (short segments) of action in multiple angles. The classic way to cover your caboose is by shooting the entire scene in master shot (an angle wide enough to show the whole action). Then you shoot the scene at least twice again from closer angles, to feature individual players and to show details .

The old "master shot/his closeup/her closeup" scheme has long been a cliche, but it does at least deliver ample footage to cut with. A more modern alternative is to replace the master shot with a custom-built setup (such as a moving shot) that covers the entire action. This avoids the master shots static, stagy feeling while still providing full coverage from at least three different angles.

A good director also provides coverage for protection. A protection shot anticipates a potential problem and delivers the means to fix it. For example, suppose shot A shows a character getting into a car, turning around in the driveway of a large estate and accelerating to the street. Shot B shows the car screech into the street and drive away .

Watching the action in shot A, you wonder if all that backing around might get boring. To protect yourself, you shoot a quick closeup of the driver as he reverses and then starts forward. By cutting in this protection shot, the editor can omit most of the backing footage and lose much of the driveway as well. An action that took 30 seconds in real-life now lasts only ten on the screen.

To complete your coverage of a sequence, capture cutaways, inserts and color shots. Cutaways show material other than the main subject. For example, a cutaway might show a gardener reacting as the car roars off down the driveway.

An insert reveals a detail of the action or provides extra information. A hand turning an ignition key is an insert that shows detailed action, while a closeup of a fuel gauge reading empty delivers information. If an insert or cutaway follows a shot of a performer noticing or looking at something, the shots are sometimes called a "glance/object" pair.

Color shots are cutaways that add to the general atmosphere rather than provide information about the action. A wide shot of the garden party on the lawn behind the driveway would be a color shot.

Cutaways and inserts make great buffer shots. By displaying totally different content, a buffer shot softens viewers memories of the shot that preceded it. So if the editor wants to shorten a dull passage, correct an action mismatch or screen direction booboo, or repair a performance mistake, a cutaway or insert at the fix point will often conceal the surgery.

Incidentally, color shots dont buffer as well because theyre unmotivated. Theyre great for establishing the feel of a new locale, but they can seem intrusive when they interrupt the action. If you cut back to the lawn party in the middle of the cars screaming exit, the audience wonders what the party shot is for. For more details about cutaways, check out

Continuity means shot-to-shot consistency of information, action and screen direction. The goal is to make the program play as a single, continuous whole. This can be very tough to achieve because a single-camera setup can only capture one angle at a time. If you shoot the next angle weeks, days or even minutes later, Murphys Law will fire up and changes will try to sneak in.

The most obvious inconsistencies involve information and action . In shot A, for example, she reaches for the letter with her right hand. But in shot B she picks it up with her left hand. Then, in shot C, the envelope is already torn because she opened the letter at the end of shot B. At about this point you can hear an anguished "Aaarrgghh!" arise from the edit bay.

A good editor can fix, omit, hide or minimize many continuity lapses (See Edit Suite in the March 2000 issue of Videomaker for tips on how to do this.) Your job, as shooter/director, is to prevent them in the first place.

The best way to do this is by screening shot A before shooting B to check the details of the action. This is easy in situations where you can keep a VCR and monitor handy. But if you must, review footage by playing it in the camcorder, protect yourself from problems: