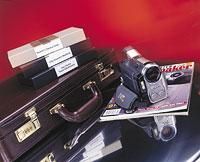 You’ve shot hundreds of hours of video. You know the difference between trucking and panning. You can set up a three-point lighting arrangement. You understand white balance, focal range and depth of field. You have mastered desktop editing and you’ve even been paid a couple of times to capture an event on tape. For the most part, you are an accomplished, semi-professional video producer.
So what’s missing? Simply put: an audience. To produce a video is one thing. But to have it seen by others is a whole ‘nother ball game.
Getting your video aired on television has historically been difficult. But that is changing. With the advent of the 500-plus channel cable television system wired into homes across America, there’s going to be a lot of air time to fill. And who better to do that job than those already experienced in low-budget video production? More choices for the viewer means that specialized and niche programming will become more popular than ever. Cable channels needing low-cost programming are going to turn to alternative, non-commercial sources. Cable operators will be open to new ideas and new technologies to fill these needs.
Though this brave new world of opportunity for videographers is still on the horizon, there are currently several ways to get your feet wet in the world of mass distribution. You can prepare for the fertile future by finding that elusive viewing audience now.

In 1984, the Cable Communications Policy Act stated that local governments could require cable operators to provide one or more channels for public use. This is how public access television was born. Parodied in movies and often thought of as a dumping ground for amateurish video production, public access still provides videographers with the opportunity to broadcast their work to a potentially large audience. Public access is available free to anyone – regardless of background or agenda – who has something to say to local viewers.
Public, educational and governmental (PEG) access television channels on cable TV serve a wide range of community organizations. These include churches, Lions and Rotary Clubs, local political organizations and high schools and colleges, to name a few. Through PEG access centers, thousands of community groups and individuals produce an incredible volume of new local programming each week.
Since all cable operators are not required to provide access (it is a function of negotiations with the communities they serve), finding a channel to program your work is not always easy. Your local cable operator is the best place to start. Inquire as to the availability of its access channels. If you’re lucky, one already exists in your community.
Because public access is a locally governed entity, operational rules, equipment avail-ability and technical assistance will vary. Some studios feature membership fees, lighting rigs, high-end gear and fully-trained crews, while others may have feeder decks that merely transfer your self-produced tapes to the system. Regardless, it’s a low-cost method of getting your videos broadcast to local TV audiences.
The Alliance for Community Media, a nonprofit, national membership organization founded in 1976, is one of the best places to get information on public access television. The group represents the interests of over 1,000 PEG access organizations and public access Internet centers across the country. You can contact this group at Alliance for Community Media, 666 11th St, NW, Suite 740, Washington, DC 20001-4542, (202) 393-2650. Or visit them on the Web at www.alliancecm.org for more information.
As for programming content, once you clear all broadcast standards and practices, your options are wide open. A recent review of access shows in the United States found the following as common topics: restaurant reviews, talk-shows, local news, stand-up comedy, dating, job hunting, classifieds, automobiles, local band showcase, fishing, electronic gaming, Internet instruction, independent video showcase and a program that gauged local nightspots by their attraction to singles. Limited only by your imagination, public access provides videographers the simplest manner to get productions on the air.
The educational and government access channels offer only limited opportunities for videographers. Government access is information and programming concerning civic affairs (which is usually seen as text scrolling on the screen or city council meetings), while educational access is often used by organizations that air telecourses as part of continuing education programs. Both are local origination channels, which mean those who oversee the channels also decide what airs. Those same folks are also responsible for production and likely have an in-house staff. Contract work that pays well is sometimes available. For videographers with advanced gear and skills, it’s worth checking out.

As with public access, videographers can thank the U.S. Government for yet another distribution avenue. The leased access provision of the Cable Act of 1992 requires cable system operators, that meet certain criteria, to make a portion of their capacity available to all comers for a reasonable fee. Through the law, Congress placed a vital means of distribution within the reach of most independent videographers. Combined with today’s low-cost, high-quality video production technologies, leased access makes it possible for just about anybody to have a professional-looking and accessible television show.
Unbelievably though, few videographers take advantage of leased access. Why? Two reasons: First, a general lack of awareness on the part of videographers and second, the reluctance of many cable system operators to allow unaffiliated programmers onto their systems. This is understandable when you consider that cable systems must sacrifice potentially high-profit channel capacity for local productions that may interest only a small portion of the subscribers. Regardless, you are now aware of leased access and the law is the law, so there should be nothing holding you back.
To get started with leased access, call any local cable system that operates within the parameters that we mentioned earlier. Check on channel availability, open airtimes and most importantly, rates. Leased access time, usually sold in half-hour units, generally costs anywhere from $25 to $300 for a 30-minute block depending on where you live, and the time block you’d like to purchase.
If the thought of cablecasting your message to thousands of viewers for less than the cost of a fine meal sounds exciting – it gets better. Not only does leased access availability give videographers a showcase for their work; it also allows this activity in a commercial atmosphere. Unlike public access and the other government television involvement, leased access allows for commercial material within the programming. In other words, you can sell advertising time just like a real broadcaster.
Depending on your initiative, salesmanship and financial situation, you may view leased access as a moneymaking opportunity or a necessary out-of-pocket cost. Either way, it’s a chance to develop and distribute videos to a once-unavailable audience.

On With The Show

With public distribution of your video skills finally within reach, it’s time to work on ideas possessing audience appeal. Maybe you can recycle some past video project that you did into a broadcast program. Recital or play videos could become a local talent showcase series. Be sure to obtain the proper copyright releases on any copyrighted material including plays, music, etc. If you shoot weddings, maybe a weekly wedding show, sponsored by area bridal shops, will gain interest. Or, if you’ve shot a bundle of seemingly useless "around-the-town" type stuff – parades, parks, cityscapes, and the like – local merchants and government may look favorably on a "home town tourist’s guide" much like those run in big city hotels. For those developing new shows, again, the sky’s the limit as long as you observe applicable broadcasting ethics.

Finally, if public and leased access channels are unavailable, don’t forget that other options exist to distribute your work. Low Power Television Stations (LPTV) sometimes operate much like leased access stations. Airtime may be available for purchase from the station, with the producer retaining commercial time during the show. Individual LPTV stations and some multi-station networks are scattered throughout the nation; they exist on the upper bands of the broadcast signal. Another avenue to distribution is reality TV. The popularity of these shows means they are always looking for footage. Scan the content of the programs currently airing to determine if you have or can shoot footage that fits their needs. Along the same lines, local news programs also provide a channel of distribution. Any footage of natural disasters or one-of-a-kind events, that you have exclusive footage of, may find its way onto the evening news.
With some planning, research and a little ingenuity, there’s no reason why your video project could not be "on the air." After all, getting your video broadcast to an audience outside of your living room is the final goal of any distribution effort. Additionally, it can be a gratifying and even profitable experience for a semi-professional video producer.