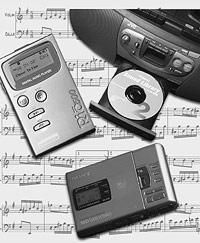 A Digital Audio Studio in a Box

Getting good audio in video can sometimes be as simple as putting an external microphone next to your subject. However, for all the other times when your video’s single track of audio that you record with just doesn’t cut. When that happens, you can either get an audio mixer with some audio recording equipment or you can get something like the Edirol VideoCanvas A-6 Digital Multi Audio Station. Designed for professionals and advanced hobbyists, the A-6 from Edirol (a division of Roland) is a hard disk recorder, a mixer, a sampler and an effects processor all rolled into one box.

Edirol’s A-6 takes nonlinear audio and puts everything you need into a simple to use, stand-alone box. Using the A-6, a video producer can manipulate up to four tracks at a time and combine the four tracks into eight different "virtual tracks". There are also MIDI-in and MIDI-out ports to hook up an optional video MIDI synch interface. This would, when combined with the A-6, make the two an excellent audio system for videographers making music videos or recording live music.

Instead of using some type of tape-based mechanism, the A-6 uses a computer hard disk to store up to 9-hours of audio encoded into a proprietary audio format. By storing the audio on the hard disk, you can access any sound you have on the A-6 almost instantly. This nonlinear access to sounds is the heart of what the A-6 can do.

With only one mike jack, and two stereo RCA jacks (one for VCR or camcorder, the other for CD player), there is a limited number of devices that you can plug into the A-6 at one time. In fact, if you were recording live audio with multiple microphones, you’d be better off combining the A-6 as a recording device with a normal mixing board. The A-6 would really shine for the videographer who uses a linear editing setup. When editing, you could easily use the A-6 to create the type of multi-layered audio track that is more-often found in video edited with computer-based nonlinear systems.

Recording with the A-6 is simple. You hook up your sources to the box, press the status button that is over the fader corresponding to the source you wish to record until it shines red, and hit the record button. This will have the A-6 standing on the verge of recording. When everything is cued perfectly, you hit the play button and it will actually start recording. When you have recorded a clip, you can trim it. Another nice recording option is the ability to record a clip and assign it to one of the slots on the keypad for quick playback as a sample.

The keypad allows you to easily access up to 10 samples at one time (there are four additional "favorite" buttons, so really 14 samples at one time). You can save up to 99 arrangements of the 10 samples, so with the A-6, you can actually have 994 samples ready to play back. The samples will play as long as you hold down the button, and you can play as many as four samples at once. The samples can also be looped or held which is especially handy when playing a piece of music that you want to continuously play without having to keep holding down the button.

The A-6 is also a full-featured effects processor. You can stretch a clip to fit a specified length, change pitch, reverse it, or use any of the special effects like reverb, delay, chorus, flanger, phaser and a variety of equalizers. There are also some more-specialized effects like isolators, hum cancel, voice transformers, microphone simulators, vocal effects, guitar effects and more. The more consists of things like an RSS (Roland Sound Space) effect that creates a 3D-like sound from two speakers, lo-fi effects like radio tuning and mock vinyl record noises that you can set to 33 1/3, 45 or 78rpm. All of these effects are programmable, so you could, for example, take the phonograph record simulator effect and adjust the input between mono and stereo, change the mock record speed, adjust the amount of dust, noise, scratches and hiss, and set some irregularity to really make your effect sound like that old Frank Zappa album that’s been hiding in your garage for 30 years.

You can also use the A-6 as a four-track mixer, although it’s not like the four-channel mixing board you’re used to seeing. Most four-channel mixers allow you to input up to four microphones or any other devices (with the proper adapters) into the board. With only one 1/4-inch microphone input, the A-6 would be pretty useless for mixing microphones for an event like a wedding. However it would be perfect for adding music and sound effects to the tape in post production.

The Edirol VideoCanvas A-6 Digital Multi Audio Station is a great product that is the perfect companion for the linear editor who is ready to take their audio into the nonlinear realm, but isn’t ready to deal with a Mac crashing or Windows giving them its infamous "Blue Screen of Death." It’s small, straightforward and designed to take care of audio for video. If you combine it with the optional Edirol SI-80SP MIDI Sync Interface, you get machine control of your VCR or camcorder with Control-L, which makes the A-6 perfect for the videographer who tapes music videos and concerts.