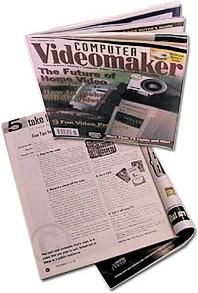 
I started shooting video with a Sony Hi8 a few years back. But it was hard for me to create anything with pride. I concluded that home video was trapped in the constraints of

I just read your review of the ADS Technologies Pyro! IEEE 1394 Capture Card in the November issue of Videomaker. I bought the Pyro two months ago and have enjoyed it since the day I was able to configure it properly. After several frustrating hours, I was able to capture video without any capture error codes.

I own a Sony DSR-PD100 (Pro version of the Sony TRV 900). The solution to those capture error codes is to set your source video to 16-bit audio. If you attempt to capture source video recorded in 12-bit audio, VideoStudio will spit out error codes every time. By the way, the default audio setting on my camera was set to record in 12-bit audio. I have notified both ADS Technologies and Ulead of this overlooked glitch, but neither company has posted this solution – talk about shooting yourself in the foot.

Neither a Lender nor Borrower Be

Tim, check out Jim Mikles article "Shoot With Caution: Video, the Law and You" in the January 1999 issue of Videomaker. Also see The Copyright Web Site at www.benedict.com or visit the US Copyright Offices site at lcweb.loc.gov/copyright. These resources should answer any questions you have.

In the November issue of Videomaker, the tech specs box for the Samsung SCL850 reviewed in Benchmarks was incorrectly labeled as the Hitachi SCL850. We apologize for any confusion this may have caused.