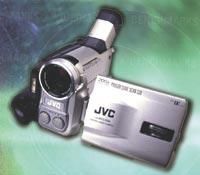 
In an effort to get the competitive edge in the Mini DV market, manufacturers are pressed to put more and more features into less and less space. Well, JVC’s latest attempt to pack a wealth of features into a tiny space took form in the GR-DVL9500 Mini DV Camcorder. JVC managed to cram a number of coveted features into a compact camcorder, but they did so at the expense of simplicity and glitch-free operation.

Set at a mid-range price, the GR-DVL9500 has enough manual controls, input/output jacks and other features to keep most advanced videographers happy. Although it certainly can work as a simple point-and-shoot camcorder, we found the controls and interface to be complicated and awkward for beginners and hobbyists. Besides, if you use only the automatic setting, you lose out on the features where the GR-DVL9500 excels.

It Packs A Punch

The GR-DVL9500 has more features than many people will know what to do with. Sporting a relatively large 3.8-inch flip-out viewscreen, the GR-DVL9500 makes viewing while recording and playback simple and enjoyable. The easily adjustable volume control on the speaker makes it double nicely as a portable mini VCR. It’s got a 10X optical zoom and a numbingly high 200X digital zoom. It comes with optical image stabilization that works well and we were pleased with the high quality video images the GR-DVL9500 captured.

It’s loaded with digital effects and transitions. There are 16 different fades and wipes and a number of other digital effects like strobe, classic film, monotone, sepia, slow motion and video echo.

But with so many features, it’s a little confusing and awkward trying to figure out how to control them all. Most of the features have to be accessed through the menu, which is a little unwieldy and awkward to use. For example, when we switched to the manual mode and wanted to focus manually, we had to turn on the menu, scroll to the focus option, push to activate it, switch it to manual, exit the menu and then we could use the dial to focus. A lot of steps to perform a basic task. It would have been nice if the GR-DVL9500 had one or two buttons that controlled some of the often-used features.


There are three basic record settings available when you are shooting video with the GR-DVL9500: full automatic, manual and 5-second recording mode. When you set the camcorder to full automatic, you’ve got a fully automatic point-and-shoot camcorder. There’s little thinking involved here and it’s an easy way to get started. Although you don’t have access to most of the features, including effects, this is an adequate setting for many situations.

The manual mode allows you to adjust the focus, exposure and white balance settings to varying degrees. The ability to control the camcorder settings is essential for quality video and it’s one of the GR-DVL9500’s best attributes. The focusing device is quite sensitive and we found that, when it was in automatic mode, it had trouble deciding just what to focus on. Luckily, manual focus alleviated this problem.

The 5-second mode allows you to record five seconds of a scene at the push of one button. This is an attempt to create automatic, cuts only, in-camera editing for people who want to take video snapshots of their travels or vacation, say, without having to later edit their footage.

Besides providing manual controls, The GR-DVL9500 covers the basics, too. It’s got most of the input and output jacks that you could hope for. With DV in/out, S-video and composite out, you’ve got your outputs covered. It even has input jacks for both headphones and an external microphone, but no inputs are available for analog audio or video.


For the record, JVC should be commended for trying to pack so many features into one camcorder. But sadly, there were some blatant problems that we couldn’t overlook. First, the GR-DVL9500’s engine made a whirring noise that the on-camera microphone on our unit clearly picked up. The microphone also picked up the noise made by the zoom motor whenever we zoomed in or out. Luckily, as we mentioned, the unit has an external mike jack.


Another feature of the GR-DVL9500 is its ability to capture digital still images. By pressing the snapshot button, you can take digital stills that record to tape. Then with the included JLIP to RS-232 cable and software, you can later transfer the images to your computer. If you have a computer with a FireWire port, you can also transfer still images using the DV capture card on your computer.

Another way the GR-DVL9500 captures stills is with the animation effect. You can enable a cool animation feature using the menu when you’re in the 5-second mode. By selecting animation, you can shoot 1/8-second clips each time you press record. With this feature you can essentially shoot and edit a fully animated sequence in-camera, without the hassle of post production.


Although we appreciate the effort that JVC made to pack as many features into one camcorder (we want it all, right?), perhaps the engineers at JVC bit off a little more than they could chew and more than the GR-DVL9500 could handle. The whirring noises from the motor and zoom combined with the awkward menu system, marred the performance of an otherwise solid camcorder. Provided an external microphone and patience on the user’s part, the GR-DVL9500 should keep even the avid videographer happy. -DC