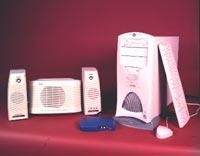 
Among nonlinear video editors, 1999 may well be remembered as the year of the turnkey system. 1999 was the year in which full-featured, pre-configured nonlinear editing systems first became available at reasonable prices. Though many would expect that shoddy products and low-end systems would mar this first year of turnkey bliss, a number of powerful pre-configured nonlinear systems that were aimed at the professional shipped in 1999 for well under $10,000.

At the heart of the Matrox Pro Edit Realtime Workstation is the Matrox DigiSuite LE dual-stream video editing card. It’s tempting to refer to this device as a video capture card, but it does much more than simply capture video (although it can capture MJPEG-compressed files at an impressive 15MB per second, which translates to slightly better than 2:1). Because it’s a dual-stream card with built-in hardware transitions, it performs like a 2D video switcher, which means no more long render times to slow down your productions.

Here’s how it works: you begin your editing project just like any other Adobe Premiere 5.1 project. First, capture your video onto the system’s lightning-fast trio of striped Ultra-Wide SCSI-2 drives. Next, compose your video in the timeline window. Add some titles using the bundled Inscriber CG software plug-in, and import them into the timeline. Throw in a few real-time transitions carefully chosen from the DigiSuite icon that appears in Premiere’s transition window. When you double-click the icon, over 130 2D transitions become available, including dissolve, over 100 wipes and 30 tile effects. Once you’ve selected your effects, go ahead and play your movie directly from the timeline without having to do a single second’s worth of rendering.

If you decide that a little rendering time for some 3D effects is worth the wait, the Matrox Pro Edit Realtime Workstation has you covered. The bundled Boris FX software provides a full range of keyframed 3D effects that you can design yourself from the ground up. When you do decide to use non-realtime transitions, the Matrox Pro Edit Realtime Workstation delivers quick render times; a two-second page peel, for example, took about 20 seconds to render. Boris FX 3D effects took a bit longer, clocking in at around a minute for a two-second transition, a three-second 3D ripple filter took the system just one minute and forty seconds to render completely.


In order to avoid some of the pitfalls of Microsoft’s Video for Windows .AVI format (such as inability to handle high data rates, lack of proper audio/video synchronization, reliance on frames rather than fields and a 2GB file-size limit), DigiSuite LE uses an enhanced AVI file format. With enhanced AVI, the DigiSuite LE can create files up to 12 terabytes in size, and is capable of achieving up to 30MB per second throughput (two 15MB/second channels operating simultaneously). What’s more, the DigiSuite LE’s rendering is field-based, and it handles audio/video synchronization beautifully.

Another useful feature of the DigiSuite LE is its ability to perform real time overlays of 3D animation, titles and 2D graphics. This means you can immediately see what a keyed overlay is going to look like on your program monitor. Applications like 3D Studio MAX, Discreet Logic paint*, Eyeon Digital Fusion and Adobe Photoshop will work with the DigiSuite LE’s linear keying function; for example, you can play your video program material in one stream while you simultaneously play your rendered, keyed 3D Studio Max titles on another stream.


As powerful as it is, the Matrox Pro Edit Realtime Workstation is not configured to work seamlessly with DV; there are no FireWire inputs or outputs available. Using the system with a Mini DV camera through the analog S-video input produced excellent results, with only minimal artifacts resulting from re-compressing DV with the MJPEG codec. Even so, DV videographers may be put off. For a DigiSuite system with full DV functionality, check out Matrox’s DigiSuite DTV, an MPEG-2 based product that was announced at last year’s NAB convention.

Still, the overall power and professional features of the Matrox Pro Edit Realtime Workstation make it an excellent choice for analog videographers shooting on Hi8, S-VHS or even Beta formats (owing to the inclusion of component video inputs and outputs). Though it might seem a bit expensive, a few months’ increased productivity brought about by the elimination of render times could well pay for the system altogether.