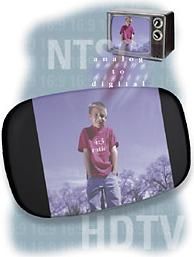 6:9 Blues
Eventually I, like most video producers, will have to start producing videos in the 16:9 aspect ratio for the new high-definition television (HDTV). Unfortunately, that requires new high-end camcorders and better capture boards for nonlinear editing work.

In nonlinear editing, one can change the aspect rzio with resizing and cropping on the top and bottom. Some software programs call this "scaling." This is a poor solution because perspective can be altered considerably and possibly some clarity as well. Another way is simple cropping, which does cut off some of the top and bottom of the image, but the perspective remains the same.

The obvious solution is to start with a camera that records in either 4:3 or 16:9. Very few cameras (Canon’s XL1 among them) can shoot in either format.

So what are we lowly 4:3 videographers to do? Put a strip of masking tape along the top and bottom of the lens shade? Don’t think so! In the future, when we all have HDTV sets, we may well see some commercial programming that has not been corrected for 16:9. Instead of seeing black along the top and bottom of the screen, letterbox-style, we’ll see it on the right and left sides, giving us a much smaller picture.

Thanks for your insightful comments. As you mention, only a few camcorder manufacturers are making new cameras with "true" 16:9 recording capabilities. Some have offered a halfway solution that merely crops the top and bottom of the picture, instead of truly recording a full 16:9 picture. However, we shouldn’t forget that there isn’t just one new digital television standard on the horizon. There are 18, anl|not all of them are 16:9. Your new digital television, when it arrives, will be required to receive all 18 digital formats, and will have some way of displaying analog NTSC programs as well.


In the April 1999 issue of Videomaker it was nice to read about the winning entries in the Videomaker/Panasonic Video Contest. However, I strongly disagree with three of your selections. You awarded three entries that displayed violence. I know what you are thinking: "Well, it’s all art." Art it may be, but is this not a cop-out?

Isn’t it about time that we stop glorifying violence in our society? Isn’t it about time that all forms of media stop and think about what influence they have on our culture, especially with children? We have children killing children, brothers killing brothers, and spouses killing spouses simply because they think that violence is the solution to all their problems. This is what they have learned from the media–especially the entertainment media. Research has shown that the amount of violence in the media is constantly growing. This is affecting the morals of our society and to deny it would be ludicrous.

When will we, as a society, wake up? It seems Videomaker has chosen to be a part of the problem and not a part of the solution. I am disappointed.

We share your concerns about the level of violence in today’s media, and would like to assure you that we have not chosen to be part of the problem. We felt that the winning entries in the Videomaker/Panasonic Contest displayed a level of competence that deserved recognition. In the Videomaker/Panasonic Contest, we give awards based primarily on the entrants’ skillful use of video tools rather than on the content or genre of the video.


It was by chance that I found your magazine. I was flipping through your pages on the magazine rack when the "Light Source" column caught my eye. "The Power of Three-Point Lighting" by Robert G. Nulph was exceptional, so I had to buy the magazine. Later, I found it to be full of excellent information about techniques of creative video, tools, camcorders and computers. Thanks, Videomaker.


On page 62 of our Desktop Video buyer’s guide in the March 1999 issue, Videomaker inaccurately listed Pinnacle’s miroMOTION DC30plus capture card as not having an audio capture capability. It does capture audio in real-time directly to the hard disk in a selectable quality range from 8-bit mono 11kHz to 16-bit stereo 44.1kHz.