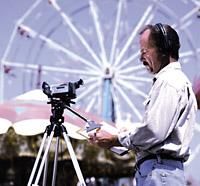 Video production is most exciting when you do it by the seat of your pants. You can capture some great video with just a camcorder, a tripod and some guts o’ steel. Today, we’re going to take that seat-of-your-pants approach to the next level.

I’m talking about in-camera editing, a bare bones, stripped-down method for shooting a finished video program. It’s editing without a safety net–without any decks, cables, computers, or other techno-video-toys. All you need is your camcorder. Call it "extreme editing." Trust me. It doesn’t get more seat-of-your-pants than this.

In-camera editing is actually something of a misnomer. When you think of video editing, you probably think of a time when the shooting is over and you can put all the pieces of your program together at your leisure. Not so with in-camera editing. Why? Because in-camera editing requires you to edit while you shoot.

In fact, in-camera editing is not true "editing" at all. Instead, it refers to the process of shooting your program sequentially–each scene shot in order, and at the length that it will appear in the finished program–so that you have a complete program as soon as you are done taping.

While it is useful in just about any shooting situation, in-camera editing is really effective when shooting an event, i.e. something that you already want to shoot in sequence. In-camera editing is ideal for weddings, birthday parties and the like.

As with all extreme activities, in-camera editing leaves very little margin for error. Every shot must be right or the whole show’s a bust. That means you need to do a lot more pre-production planning before you shoot, than you normally might. The order of your shots is especially important, as you must lay them down in their proper finished order. There are no second chances. Your shooting technique is also an issue, as botched shots and ruined transitions cannot be repaired after the fact.

Don’t take my ominous tone too seriously, though. In-camera editing can be a lot of fun. Let’s look at the process from start to finish to better understand it.

All programs require some planning, regardless of how you assemble them. However, since you will be shooting everything in sequence, a good plan is even more valuable to you. The heart of your plan is your shot sheet or storyboard. To begin, sit down with a pencil and a pad of paper, close your eyes and visualize your program from start to finish. As you do, jot down the shots you see in your mind’s eye. A wedding, for example, might start out something like this:

Continue with this process until you have written a sequential list of every shot in your finished program.

Now you can set up your shooting schedule. It may be that some program elements are only available to you at certain times.

If you’re documenting a day in your life, say, then your family is central to your program and you will have to coordinate your shooting efforts around their schedules. Perhaps there are sets you need to treat. Shooting in your garage? You might have to clean up the clutter or maybe you’ll need to trim your lawn for your shot

Go through your shot list and decide what shots you can get immediately and what shots you may have to wait for. You will end up turning your shot sheet into a shooting calendar, outlining the days and times you can get each of your shots in their proper order. Hopefully, you will be able to arrange shots in blocks that can be shot on the same day, so that your project doesn’t stretch out into months.

Executing to the Extreme

With your completed shot sheet in hand, set up your first shot. I would suggest fading up from black at the beginning of your program; most camcorders have a function that lets you do this as you shoot.

Record your first shot, then pause the camcorder. Set up your second shot, and lay it down to tape. Continue in this manner, as you move sequentially down your shot list. Don’t worry if you have to turn off the camcorder to wait for a shot or run to dinner. As long as you don’t remove the tape from the unit, your camcorder will make sure that your shots will flow seamlessly together, whether you simply pause the camcorder or turn it off overnight. Be careful to re-cue the tape properly if you switch to VCR mode to play back your production part way through. If you miscue, you could wind up with a snowy break in the control track of your tape.

When you reach your last shot, fade to black, as a way of putting a period on your program. Voila! Now you’re not just a videographer, but an in-camera editor as well.

Unless your camcorder has a lot of built-in special effects, such as wipes and dissolves, in-camera editing is a cuts-only exercise. That means no fancy transitions between scenes, just one shot right after the other. At first blush, the cuts-only nature of in-camera editing can seem pretty boring. To be honest, though, they are the bread and butter of the editing process. Should you want to add a pinch of spice, however, you do have the freedom to get creative, even with cuts-only editing. For example, you can creatively blur your shot for seamless scene transitions. How? Many camcorders have a manual focus option. Simply turn on manual focus and blur the end of one shot and the beginning of the next shot. Let your camcorder bring the shot back into focus on cue by reactivating autofocus. Now, rather than an otherwise jarring edit, you soften the transition with the blur.

You can take this technique a step further. Try cutting your scenes on a uniform color or texture. For example, you can end your first shot by filling the screen with a close up of Cousin Bill’s navy blue sport coat and begin the next scene with an extreme closeup of your navy blue Chevy Truck. If your camcorder supports it, try colorizing your shots electronically to get the same effect. Or close the first shot by tilting down and zooming in on the pavement in one location, and opening the next scene with a similar closeup in another location. In each case, you’re cutting on a uniform color or texture, making it difficult for the audience to tell where one shot stops and the other begins. The cut is smooth and transparent.

You can cut on similar shapes, as well. End one scene with a closeup of a round object–a pizza, for example–and begin the next shot with a similarly shaped object of equal size, like a closeup of a bicycle wheel. While this technique doesn’t work to hide the cut between shots, it does create an interesting transitional effect that will enhance your presentation.

Want to get really extreme? Combine any of the aforementioned effects with some cool audio. Many Mini DV and S-VHS camcorders support audio dubbing.

Audio dub allows you to replace the original audio, recorded with the video, with music or narration.

Audio dub can be used only after your video is recorded. A few camcorders offer a video dub option, which allows you to record a track of music first, and then listen to the track in headphones as you shoot.

I mentioned earlier that it is important for you to get each shot right the first time. You won’t get a second chance to correct mistakes. For best results, rehearse your shots before you roll tape. It’s likely that you haven’t tried many of the effects described above. Why risk blowing your whole program? Instead, set up the camcorder and rehearse the shot–several times, if necessary. Then, when you feel you’ve got it down pat, press the "Record" button and hope for the best.

In-camera editing is a way for you to take video production to the extremes. Even if you are faint of heart and not into extreme anything, you will find in-camera editing a useful technique for producing impressive videos on the fly. You will become a more disciplined shooter as well, and that discipline will appear in the quality of the videos you produce.