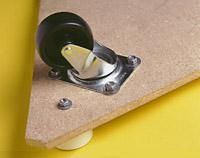 Directors have used dolly shots in motion pictures and television for decades, but very few videographers have discovered the benefits of adding a set of wheels to their video arsenal. Next time you watch TV, watch a little more closely. You’ll begin to notice that the camera often moves as the talent speaks. This may be a subtle movement that you barely notice as Tom Brokaw introduces the big story on NBC Nightly News, or it may be a bold movement as the camera glides straight toward James Brown on The World’s Funniest. The truth is that, in reality, you’d be hard pressed to find a camera in any broadcast television studio that is not mounted on a set of wheels. In studio production, dollys are essential equipment.

Those smooth, rolling shots add a subtle feel of quality to a video. They subliminally say to the viewer, "this looks like TV." So why haven’t small format video producers jumped on the dolly bandwagon? Got me. Building your own is easier than you might think.

Start by adjusting your tripod to a height about five inches lower than you would typically like it for comfortable shooting. This way, your camera will sit at the height you like when it is perched atop the four- to six-inch-high dolly. Lay a piece of sturdy plywood or particle board (at least 1/2 an inch thick) on the floor and place your tripod on top.

Next, mark the wood where the legs sit, then measure and mark points on the wood about four inches beyond each leg. With a power saw, cut a large triangle, connecting these outer marks. This large wooden triangle will be the base of your dolly.

Mount large casters at each corner of the base. The kind that mount with four bolts are more stable than the single bolt variety. Some include levers that allow you to lock the wheels so they won’t roll. This feature is a big bonus. Trust me, it’s worth spending the extra dollar or two to get the locking wheels.

Now just mount your tripod to the rolling platform. We chose to mount cups (inexpensive PVC caps from the local home and garden store) to the platform. A small bolt and a couple washers work just great for attaching them. The tripod’s legs simply drop into the cups. Total cost for this one was just $39.


Keep in mind that dollys are meant to be used on smooth, flat surfaces. Even thick, uneven carpet can add an annoying jiggle to your shots. As with any dolly, be careful to clear a path and take it slowly at first. Pushing your dolly wildly over power cords or rough terrain can cause your camcorder to topple. And with this dolly, a kiss won’t make it all better.