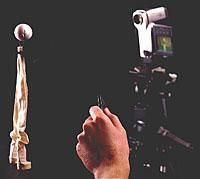 If you’ve ever looked at a strip of movie film, you can see it’s actually a sequence of still images. Video is also made up of still images. What we see as motion on a movie screen or TV is actually an optical illusion based on a phenomenon called "persistence of vision." Persistence of vision refers to the brain’s ability to retain the image of an object for a brief moment after it’s gone. When displaying video images at 30 frames-per-second, each individual still image seems to blend with another, creating an effect of
continuous movement.

Simple video animation occurs by placing props in front of a background, videotaping the scene for a fraction of a second, moving the props slightly, taping another fraction of second, moving the props, taping, moving, taping, moving, etc. Repeated over and over, the stationary objects will appear to move fluidly in an illusion of motion. Persistence of vision makes the animation come to life.

Animations can be as simple or complex as your time, equipment and personal disposition toward meticulous work permits. Of course, professional animation like you see on television or in the movies is created frame-by-frame using computers or expensive video equipment. Most home videographers should not expect to create animation of this quality.

Although your equipment may not be the most expensive, your results can be quite satisfying. Shooting still-
sequence animation requires just a couple of steps: first to determine how to record just a few frames at a time with your camcorder, then to actually plan and shoot your animated production.