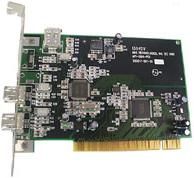 This year’s COMDEX show in Las Vegas saw a number of new and upgraded video products unveiled. Here are some of the highlights:

ADS Technologies is jumping into the FireWire ring with a new high-speed digital capture card, the Momentum 1394DV. Due out this month, the low-cost card is further evidence that FireWire (IEEE 1394) has firmly rooted itself in the multimedia marketplace.

Said to transfer up to 50MB per second of video from a DV camera to a PC hard drive, ADS is touting Momentum as the fastest consumer digital input interface introduced to date.

The Momentum is a PCI board that will connect with DV camcorders with an IEEE 1394 port to move video to and from a PC for editing and output. While the card includes a basic video editing package, ADS is relying on the speed and price of the board to drive demand, not the included bundle. The board will also be compatible with other FireWire-equipped peripherals such as cameras, printers, scanners, VCRs and home audio devices as they become available.

The Momentum card will sell for around $180, and will run on a Pentium 166MHz or faster processor with a Windows 98 or NT 5.0 operating system.

With the unveiling this month of the Panasonic AG-DV2000 DV editing VCR, Panasonic Broadcast & Digital Systems becomes only the second manufacturer to release a consumer DV deck in the United States. Priced at $2,995, Panasonic packed the DV2000 with features, according to Panasonic Broadcast company officials.

Featuring digital component video quality, more than 500-lines of resolution, jog/shuttle control, a FireWire (IEEE 1394) input/output terminal and PCM audio, the DV2000 is compatible with both Mini DV and full-size DV cassettes for recording and playback. Additionally, the deck will play back DV tapes (Mini DV and full-size) recorded in the DVCAM format used by Sony.

The DV2000 offers the first detachable infrared wireless edit controller that allows remote operation of the unit’s edit functions, according to Panasonic officials. Edit functions include one-touch editing keys and versatile edit functions, such as audio/video insert editing and assemble editing for up to 40 scenes.

"The AG-DV2000 is the first truly professional and affordable DV VCR by the company who brought users their most trusted S-VHS products," said Steven Abend, national sales and marketing manager. "This VCR offers picture and sound quality unmatched by anything in its class."