You can make every video you produce better looking with some basic lighting knowledge, a little imagination and a willingness to experiment. Ross Lowell, founder of Lowell-Light Manufacturing, suggests that there are several goals when planning lighting for a video. According to Lowell, lighting is used to enhance the mood, atmosphere and drama. It’s used to separate planes, suggest depth, reveal character and highlight texture. Lighting can enrich a production and, occasionally, bedazzle the audience.

Interestingly enough, most of these feelings can be communicated using a single light. And although most lighting set-ups will use multiple lamps, all good lighting starts with the key light. Regardless of where it is positioned, the key light is the primary source of light in a scene. It is the most intense and most direct light falling on the subject. In a previous column, we described ways to use the sun as a key light. In this column, we will look at the various ways to set up an artificial lamp as the key light. It’s important to understand differences between a "hard key" and a "soft key" light, as well as between "high-key" and "low-key" lighting. Using these lighting techniques, the video producer can create a wide variety of moods.

For purposes of this column, assume that our subject is sitting at the center of a clock face and that the camera operator is at the six o’clock position. The most commonly used light configuration would place the key light slightly to the side of the camera at between the four and five o’clock positions (see Figure 1B on page 30). Elevate it to an angle of between 35 and 45 degrees above the subject. This placement will create some shadows on the face, giving it a three-dimensional look. The height is enough to keep it out of the subject’s eyes, yet not so high as to create dark shadows under the eyes.

Because the key light establishes the primary mood, an important question to answer is what mood are you trying to set? Is your subject being interviewed for a news program or telling jokes? Is the mood heavy and dramatic or light and cheery? The mood you wish to create will determine where you place your key light and the relative hardness or softness of the beam.


As we said earlier, the most common place to set the key light is between the four and five o’clock positions. While this is quite effective for standard interviews, it is fairly basic and does not give the viewer much in the way of an emotional response. This might be called a "neutral" position, as the key light does not play a major role in setting the mood of the shot. This is a safe place to set your key light for nearly any situation.

The key light does not have to stay in this position, however. If you want to create a highly dramatic look, you may choose to move your light toward the three o’clock position (Figure 1A). Lighting from the side will divide your subject’s face into halves and can create very dramatic results. This position is used often on men. The hard, angular shadows tend to make a subject look masculine.

If you place the key light at the six o’clock position, you will create a flat, shadowless image (Figure 1C). This placement is often used for shooting women, as it flattens the face and adds sparkle to the eyes. It is used regularly by photographers when shooting fashion models.


A key light can have either a "hard" or "soft" quality. The quality of the light impacts the mood of a shot as much as the position of the lamp. A "hard" key light emphasizes the subject’s form and texture. A "soft" key light reduces lines in the face and lends a smooth, even look to the subject. A good example of a hard key light is the sun on a bright clear day, because it creates very hard-edged shadows. Some people call this "fast falloff" light due to the rapid change between the light and the dark shadows it creates. Small (or distant) light sources create a hard key look. A large or close light will offer a softer look. On a hazy day, the sun casts softer shadows.

If you were trying to show the weathered face of a sailor or outdoorsman, you might use a small light placed at the three o’clock position to create a hard key. This would bring out the lined textures of his face. If you were shooting an attractive young lady, you might opt for a large, soft key at the six o’clock position.

A soft key light is also known as a "slow falloff" light due to the very gradual change between the lighted surface and the dark shadow. These lamps are diffused to make them essentially larger, which softens shadows and creates a smooth, more flattering light.


The height of the key light can also add impact to a shot. A semi-soft key placed at the three o’clock position slightly above the subject’s eye level will look like living room lamplight. The same light placed fifty or sixty degrees above the head of the subject and at the five o’clock position will appear to be a ceiling fixture. A hard key light with a daylight color correction gel (light blue), shone through a venetian blind will create the illusion of moonlight. The feeling of early morning or late afternoon is achieved by positioning a hard key light (with a light orange gel) at twenty-five degrees above the subject. The long shadows created in the background and the clean lines of the fast-falloff lighting will give the illusion of early morning or late afternoon sunlight.

For highly dramatic lighting, you may choose to create cameo lighting, which is a brightly lit subject against a black background. To create cameo lighting, place a hard key light at the four o’clock position sixty degrees above the subject. Be sure to keep the light from falling on the background. The resulting image has a very high contrast ratio between light and dark areas, and may prove difficult for some camcorders to reproduce. If your camcorder can handle the image without a noticeable amount of video noise in the blacks, or glowing bright light areas, the resulting cameo-lit image is extremely dramatic.


Unlike "hard" or "soft" key lights, high-key or low-key lighting has little to do with either the placement or intensity of the lights. These terms describe the overall abundance and spread of the lights used. A high-key lighting design fills an area with light, providing a bright, somewhat seamless look. This lighting reduces shadows so the viewer can see every corner of the set. You see this type of lighting used for news sets, game shows, situation comedies and soft, friendly interviews. To create the high key look, use a number of soft lights.

A low-key light design is darker and much moodier. Often, a hard key light illuminates the subject with little or no fill light and very little background lighting. Use this type of lighting for night settings and dramatic interviews.


Whatever your lighting needs, keep in mind that only you and your imagination can determine what kind of key light will work best. By using the principles outlined here and experimenting with various light positions, you will find ways to achieve the style of light you need for your production.

Remember that the key light is a starting point. By adding fill lights, back lights, set lights, and eye lights, you can create lighting that looks as good as what you see on the big screen. If you understand the key light you are well on your way to achieving success as a light-savvy videographer. 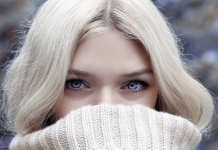