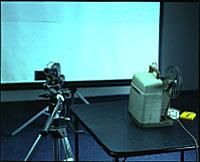 Many of you may have cut your teeth on 8mm or Super8 home movies long before you discovered videotape. Now you ask yourself, "What do I do with all that film?" Heck, you can hardly remember how to thread the projector anymore.

The answer is to transfer your home movies to videotape. Look in the phone book or search the Internet and you will find dozens of businesses nationwide that specialize in this service. You can, however, do it just as easily in your own family room. A homemade transfer will have more flicker than a professional one (more about that later), but that shouldn’t stop you.

In case it isn’t already obvious why you should transfer your film to video, picture that clunky projector up in the attic. When was the last time you used that monster? It’s tough to set up, it’s noisy, and, well, it just isn’t as nifty-neato as your four-head VCR with jog/shuttle and freeze-frame.

In addition, you should remember that, like all things, film deteriorates over time. That’s not to say videotape won’t break down in another 25 years, but by transferring your old film images to a brand new videotape, you may be buying your memories another quarter-century.

Finally, at some point you may want to edit your home movies. If you don’t remember how to change the bulb in the projector, do you really think you’ll be able to figure out how to splice 8mm film? Modern video editing techniques–even at the consumer level–make videotape editing infinitely easier than film editing.

Transferring film to video doesn’t require a lot of gear. You need very little you don’t already have. Obviously, you need a film projector, some sort of screen and a camcorder with a tripod.

Don’t have a screen? Not a problem. A white wall will work. A piece of white card stock or foam core may actually work best. Movie screens are often reflective, causing a hot spot in part of the picture and few walls are smooth enough to work well. Just hang a piece of white posterboard on a wall and you’re set. Remember that your projected image can only be as large as your screen, card or wall.

There are advantages and disadvantages to projecting large and small images. If the projector is placed close to the screen, the projected image will be smaller. Colors will be more saturated and the image will be sharp and clear. The same projector moved farther away will project a larger image. As light from the projector spreads over distance, colors will appear less saturated and the image less clear. For the clearest images, project your footage as small as is practical.

Depending upon how much film you will be transferring, you will need a corresponding amount of videotape. Super8 film, for example, typically comes in reels of 50 and 200 feet. The 50-footers have a running time of a little more than three minutes. Do the math and you can estimate the 200-footers will be about 12 minutes long. This means you can get five 200-foot reels on a 60 minutes tape and 10 200-foot reels on a 120-minute tape. If you have a full-size VHS or S-VHS camcorder, an 8mm, Hi8 or DV, a single 60-minute cassette should do just fine. Keep in mind, however, that compact VHS and S-VHS-C, only have a running time of 30 minutes in "SP" mode, that means only two and a half reels per tape. You will need several of them for longer transfer sessions.

A note here about flickering. Flickering is inherent in the transfer process because film projectors operate at 24 frames-per-second and camcorders record at 30 frames-per-second. It will probably help to reduce flicker to find a projector with a five-bladed shutter, or install one yourself. Most projectors have a four-bladed shutter, which means the film is projected through a shutter with four spinning blades. A five-bladed shutter increases the number of frames per second being projected to more closely match the speed of the camcorder. This method isn’t perfect, however, and a professional film transfer is the only way to achieve a fully flicker-free production

If your camcorder has manual controls, use them. With the lights out and the film rolling, set your focus on the projected image. Allow your camcorder’s automatic controls to adjust the iris and shutter, then switch to manual to lock them in place. If left in automatic mode, the camcorder will boost the levels when the scene goes to black, and make your video look ugly.


Try to get the room as dark as possible. A very dark room will allow you the luxury of recording a few seconds of "black" before each film clip. With that in mind, begin recording with your camcorder while the room is dark and with the projector still off.

After about five seconds of black, turn on the projector. The film-to-video transfer has officially begun.

Watch the projector carefully so you know when the end of a film reel is coming (a small flashlight may be helpful). Before you come to the end of the reel, pause the tape. Do not turn the camcorder off or switch to VCR mode to review the footage. Doing so may result in a visible glitch that you will never be able to repair.

With the camcorder still paused, thread the next reel of film and get it ready. Turn out the lights, record about five seconds of blackness, and start the projector up again. Keep this up until you either run out of reels or have to start with a fresh videotape.


If you are familiar with the film footage, you can use some camera moves to liven up otherwise stationary shots. Let’s suppose you are transferring some film of a birthday party. When the footage was shot on film, the camera operator held the shot wide to show all the attendees in one shot. That doesn’t mean that is the way you have to show it on video. You can use the camera to do a bit of editing on the fly. This is where a larger projected image is more desirable.

With the image projected on a wall or large screen you can zoom in on one or two of the people in the shot, just as you would if you were shooting them in real life. If you are feeling especially creative, add a camera move. Pan across the shot, showing a few people at a time. In this way, you can actually improve upon the original footage, call attention to a single important person in the film and make the shot more interesting. As with any camera move, it helps to practice before you actually begin recording.


Some film may have audio tracks recorded with them. These tracks are usually played back through a speaker on the projector. You may want to lay these audio tracks down on videotape as part of the transfer.

One way to do this is to position the camcorder as close to the speaker as possible. However, most projectors are far too noisy for this method to work. A slightly better way to record audio is to use an external microphone that you can plug into the mike jack on your camcorder. Place the microphone right next to the projector speaker as you shoot and you will be able to lay down the film’s soundtrack to the videotape as you record (see Figure 3a), you will, of course, still get a lot of noise from the projector. If you are lucky enough to have a projector with an audio output or extension speaker jack you can use an attenuator cable and an impedance transformer (see Tech Talk, August 1998 Videomaker) to send the audio directly to the camcorder’s mike input (see Figure 3b).

If your film has no audio track, or projector noise prevents you from recording the original soundtrack clearly, you can make a new one. Pick out a piece of music that is appropriate to the footage you are recording and use an attenuator cable to connect the line-out jack from your tape or CD player to your camcorder’s mike-in jack. As you begin recording your video, start your music source and your camcorder will record the soundtrack along with the video.

Probably the best way to add audio to your existing home movies is to "do it in post." Using the audio dub function on your VCR or camcorder, you can add music, narration or both to your movies. As you play back the transfer, have a relative comment on the movies.


Transferring film-to-video isn’t only easy and inexpensive, but it’s the best way to preserve old movies before time corrupts the film. Once you’ve done all of yours, check with your parents, grandparents, aunts, uncles, cousins and other family members. Home movies not only preserve the past, they also enliven the present.