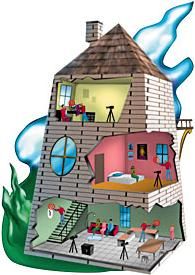 When Mark’s dad first proposed the idea of a surprise 50th anniversary party for Mark’s grandparents, he knew immediately what he would give them. He’d make them a video that captured his whole family sharing their thoughts, memories and funny stories about his grandparents’ marriage. Mark knew he’d be creating a keepsake that his family would enjoy for decades.

He also knew he would have to pay special attention to the audio. His grandfather wasn’t hearing so well these days, and had a hard time understanding the people speaking in Mark’s last college video project. The audio in that last video was muffled, something his instructor had commented on. Mark didn’t realize at the time how tricky recording clean audio could be. Determined to do better this time, Mark read everything he could about audio. He only has the mike that is on his camcorder, but he’s got some ideas for how to improve the audio on this video.

Location #1: the Bedroom
Mark decides to start by recording his younger sister Trisha, and figures Trisha’s bedroom would be the best place to shoot. He sets up his tripod in her room, frames up the shot he wants and listens carefully to the sound in the room. The buzz of the neighbor’s lawnmower seems awfully loud, and he looks around for the reason. Lifting the blinds in the window, he sees that the window is open about a quarter of an inch. Knowing that sound passes unhindered through even the smallest cracks and spreads back out through the room, he closes the window tight. This reduces the sound of the mower noticeably.

Mark has Trisha sit down on her bed, and asks her to talk while he listens to the audio through his headphones. Mark’s headphones seal out most external sounds, allowing him to really hear what the mike is picking up. What he hears isn’t pretty–the sound has an echoey quality to it. Trisha’s room doesn’t have much in it to absorb sounds, and her voice is bouncing from wall to wall. Mark looks behind him and sees that the bedroom door is closed. He opens it, allowing some of the surrounding sound to bounce out of the room. The resulting audio is better, but still has too many echoes.

Near the foot of Trisha’s bed is her closet, which has two folding doors. A closet full of clothes offers almost perfect absorption of sound. Mark opens the closet doors, creating an acoustic "trap" where sound will bounce in but not back out. With her bedroom and closet doors open, the sound is quite good. The distracting echo is gone, and her voice sounds much more intelligible.

Ten minutes later, Mark has a great-sounding interview with Trisha. He packs up his equipment and heads down the hall, where his dad is working in his home office.

Location #2: the Office
Mark sets up his tripod near his dad’s desk, puts the camcorder on pause and puts on his headphones. Having his dad speak, Mark closes his eyes and listens intently. The first thing he notices is the sound from his father’s computer and laser printer. With his dad’s permission, he shuts off the laser printer and notices an improvement in the noise. The computer is still loud, but he knows he can’t shut it off. Instead, Mark grabs a heavy packing blanket from the garage to wrap around the computer. Careful to not cover the computer’s cooling fan and air inlet, Mark doubles up the blanket and tucks it tightly around the computer. The computer noise is reduced considerably.

While listening for the computer through his headphones, Mark hears a new rushing noise. Looking up, he spots the air conditioner vent just above his dad’s desk. He tries to shut the vent, but closing it only makes it whistle loudly. Mark opens the vent back up and goes to the thermostat in the hallway. He switches the thermostat from "COOL" to "OFF," making a mental note to switch it back as soon as he’s done shooting.

About this time, Mark’s mom fires up a mixer in the kitchen and the sound from it travels down the hall and into the office. Closing the office door helps some, but the sound is still coming through loud-and-clear from the crack under the door. Mark grabs a clean towel from the bathroom and rolls it up. Placing this across the crack under the office door reduces the noise of the mixer to an acceptable level.

Now, with headphones back on, Mark’s ears are rewarded with near silence. Mark begins taping his father, listening for unwanted noises as he talks. A few minutes into the interview, the sound of the telephone ringing cuts his father off mid-sentence. Mark and his dad both laugh as they realize their oversight. After Mark’s dad gets off the phone, they shut off the ringer on the desk phone and his dad’s cellular phone, and even switch his dad’s pager to silent mode. A little wiser for the experience, Mark has his dad start over from the beginning.

In no time, Mark’s dad is finished. Mark uncovers the computer, turns on the laser printer and sets the phones and beeper back to normal. As he heads down the hall, he switches the thermostat back to "COOL."

Next stop: the kitchen.

Location #3: the Kitchen
Mark’s mom is busy preparing a cake for the upcoming party. Mark decides to hand-hold his camcorder so he can follow her as she moves through the kitchen. Putting his headphones on, he listens carefully to the sound in the room. Almost immediately, he notices the distracting hum of the refrigerator. He sets the refrigerator’s thermostat to a higher temperature. This will not affect the food and will keep it from turning on for the next few minutes. Mark makes a note of the thermostat’s original setting, so he can return it to normal after shooting.

Before he begins recording, Mark remembers to shut off the kitchen phone’s ringer. He sets the answering machine volume all the way off as well. Listening again, he hears the steady drip of the faucet in the kitchen sink. He gives the valves a spin to shut off the water. Finally, Mark notices the distracting noise of his mom’s shoes on the kitchen’s hardwood floor, as well as the occasional squeak of a loose board. Mark goes into the living room and gets a throw rug to put on the kitchen floor. Though there’s still some noise coming from the squeaky boards in the floor, they’re muffled and not nearly so noticeable with the rug down. With his mom agreeing to not stray too far from the rug, Mark is ready to record.

A few minutes later, Mark is done recording his mom. He puts the rug back in the living room, resets the refrigerator thermostat and turns the ringer on the phone back on. Last stop: the living room.

Location #4: the Living Room
For the last section of his video, Mark decides to assemble the whole family in the living room to be videotaped together. He starts by putting his camcorder on its tripod about six feet from the couch. Before he even begins shooting, he remembers the small clock on the fireplace mantel. It chimes loudly every 15 minutes, and would easily ruin the shot. He carefully grabs the clock and moves it into his bedroom at the other end of the hall and closes the door.

Donning his headphones, Mark can tell immediately that the sound of traffic from the nearby road is going to be a problem. He checks the windows to find one open a few inches. He closes it, which helps considerably. He also closes the heavy drapes over the window to further block out the traffic sounds. Closing the drapes also serves to absorb some of the echo from the living room. Its hardwood floor and mostly bare walls make it a relatively a noisy room.

Back at the camcorder, Mark has his mom talk a bit to check the sound. In spite of the drapes being closed, the sound is still too echoey. To help compensate, Mark sets the zoom lens on the camera to its widest setting. He then moves the camera as close as possible to the couch. This makes the voices comparatively louder than the sound bouncing around the room. The result is cleaner audio. To further dampen the unwanted sounds, Mark grabs the heavy packing blanket he wrapped around the computer and hangs it between two tall barstools placed near the camcorder and couch. Finally, he puts the large living room throw rug on the floor between his tripod and the couch to kill sounds bouncing up into the mike from the floor. After a quick check in his headphones, Mark is satisfied with the quality of the audio.

It’s a Wrap
The next day, at his grandparents’ anniversary party, Mark’s video is a big hit. Every word is clear, and–most importantly–the guests of honor are deeply touched by its message. Watching his video with pride, Mark is glad he expended a little extra effort to insure the audio was crisp and intelligible.