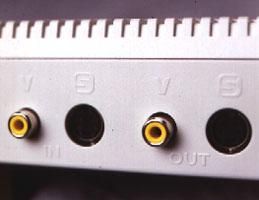 I was very pleased to see "One
Readers Room" in the March 1998 issue. I use very similar equipment
to make wildlife and nature documentaries. It gave me ideas for my set-up
and since Sig Thorsen appears to be around my age, it boosted my confidence
in my own video work. Because her equipment ideas are so close to mine I
know I must be doing the right thing! I’d like to see more of these mini
bios.

Steal From the Second Best


I liked the article, "Steal From the Best" (April 1998), about
top Hollywood directors’ visual storytelling styles and how we can incorporate
them into our own productions. How about running a "Part II" to
include Steven Spielberg, Stanley Kubrick, Francis Ford Coppola, Ridley
Scott and James Cameron?


I thought I would pop in to show you that your magazine has international
benefit. I have just enjoyed the squishy, twanging, exploding "Homemade
Sound Effects" article by Loren Alldrin in the January edition of Videomaker.
Sound effects are so valuable when viewers will see your videos–and that
includes the ones dubbed "home movies" by the unkind.

From Film to Video


I’ve just recently started reading your magazine, and it has opened
up many new doors for me. You see, I’m a minor (15) and interested in the
business of film production, but I was stuck trying to find cheap motion
picture equipment. I’m only a kid, so I don’t have a lot of money, and I
knew that it would be impossible to try to make a real movie with the experience
and funds that I had.

I learned by reading Videomaker that video production is an easier
(and cheaper) way to produce a movie. Not only that, it is a field for amateurs
and professionals alike. I just wanted to commend you for steering me onto
a less stressful career path.

More "film" festivals are accepting video entries than ever before
and there are several video-only festivals/contests, including the Videomaker/Panasonic
Contest (details in this issue). Also, check the Quick Focus section of
every Videomaker for entry deadlines of video competitions.


I had to chuckle when I read that early camcorder autofocus systems
("Getting Started," February 1998) were tediously slow and couldn’t
stay in focus with moving objects. I found the opposite to be true.

Pre-1991 camcorders used an infrared focusing system that I consider to
be far superior to the modern through-the-lens focus systems. The "slow"
infrared focusing rarely went out of focus, especially with moving objects.
My newer camcorder is almost constantly in "search and blur" mode,
thus ruining many a good shot. I wish manufacturers would bring back the
old infrared system but, in the meantime, manual focus is a must if you
want decent unblurred video.


In the February 1998 issue, we reported that the Videonics Personal
Titlemaker lacked labels on the video input and output jacks (page 41).
Videonics is now shipping Personal Titlemaker with clearly labeled jacks.