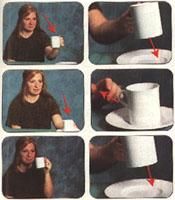 Grammar, which knows how to control
even kings. – -Jean Baptiste Moliere

In verbal communication, the same words can yield different statements because
their meanings depend on the punctuation used in each sentence. The rules
governing punctuation and sentence structure are of course called grammar,
and if you didn’t know them you couldn’t figure out a pause from a paragraph.

Traditionally, a cut joins two shots in a continuing action, a fade signals
a change from one action to another and an effect makes either type of transition
purposely calling attention to itself.

Today, television commercials, music videos and trendy movies routinely
ignore any rules they please; but in order to tell when the rules are broken
we need to know what they are. So let’s summarize visual grammar in its
classic form, starting with the most common transition: the straight cut.

In a cut, the first frame of a new shot directly follows the last frame
of the previous one. Grammatically, a cut is like the space between two
words: a division between units of meaning that signals no change at all.

In classic editing, a cut should be nearly invisible because the action
on screen moves across the division between shots in an uninterrupted flow.
This enhances the illusion that the viewer is watching a continuous process
instead of a bunch of discrete images.

Creating this illusion is easy when the shots show different subjects, such
as close-ups of two different actors, because the viewer expects the image
to change completely from shot to shot. But when two shots cover successive
views of the same subject you must spackle the seam with two crucial editing
techniques: matching action and changing camera angle.

In matching action you set the edit points so that the incoming shot picks
up precisely where the outgoing shot leaves off. There are three ways to
do this: continue movement, cut between movements, and start or end off-screen,
as you can see from Figure 1.

Cutting in the middle of an ongoing movement is the hardest method but it
delivers the most convincing illusion. In the outgoing shot of Figure 1a,
the cup descends part-way to its saucer. Then the incoming shot starts with
the cup on-screen and continues on its path toward the table. With precision
matching, the two arcs seem like different views of the same continuous
action. You can match continuous action with consumer-level editing decks
if you’re willing to practice with the deck’s accuracy.

An easier way is to make the cut during a pause in the action, as shown
in Figure 1b. Here, the performer completes the whole set-down in medium
shot and the close-up starts with the hand and the cup at rest. With no
movement to match, the edit is easier.

Simpler yet is the old off screen ploy (Figure 1c). The incoming shot starts
before the cup enters the frame, so the viewer cannot compare its end position
with its start position. With this method, you don’t have to match action
at all.

The method works equally well if you reverse it so that the outgoing cup
ends on-screen and the incoming cup starts off-screen. And when you have
a really difficult edit, try both at once: finish the outgoing and start
the incoming shots with empty screens.

Whichever method you use, matching action does only half the job of concealing
the cut. To perfect the illusion you must also shift the camera position.
By moving the point of view, you change the subject’s background and deprive
the viewer of reference points for matching action.

As we’ve often noted, you can change three aspects of camera setup: vertical
angle (from bird’s-eye down to worm’s-eye), horizontal angle (from front
through 3/4 and profile to rear) and image size (from long shot to close-up).
Figure 2 shows why it’s tough to conceal a cut without changing at least
one of these aspects and preferably two.

Figure 2a shows no angle change between the two shots and the obvious jump
cut that results. Figure 2b changes one aspect: image size. If you’re a
slick editor you can make this cut work, but it’s easier if you can change
a second aspect as well. In Figure 2c the edit changes vertical angle as
well as image size for a smoother transition.

Should you change all three aspects of a camera position? Maybe, but not
necessarily. It doesn’t add to the illusion and it can actually call attention
to the edit because the viewpoint change is so great. On the other hand,
an extreme angle change can be effective in building suspense precisely
because it produces an effect of uneasiness or even disorientation.

To Pull a Fade

A fade is a transition that includes a gradual, progressive transformation
from full image video to black (or occasionally another color). Fades come
in three classic flavors:

In classic movies, a fade was like an act break in a play. The curtain rose
or descended to signal the beginning and end of a major part of the drama.
A dissolve was like a brief blackout between scenes: the time and place
might change but the action continued.

Old Hollywood was rigorous in its use of fades and dissolves, as if film
makers didn’t trust audiences to follow the story without explicit cues.
Nowadays, however, the dissolve is used more sparingly or not at all. Movies
still fade in at their opening and fade out at the close so commonly that
starting or ending with a straight cut is a special-purpose effect.

Once you know which fade to use where, the most important decision for editing
is how long to make each one. As a rough rule of thumb, the fade should
match the mood of the scene to which it belongs. The end of a comic disaster
might crash to black in a second, while a languorous love scene drifts off
into darkness in four seconds or more.

The same rule applies to dissolves, with one addition: the double exposure.
In this variant, the outgoing and incoming shots each fade half-way until
they are equally intense, then continue together for five, ten seconds or
more. In Figure 3, for example, our heroine worries about her lover, on
the run for a crime he didn’t commit. As her close-up continues, we see
him superimposed on her face to show what she’s thinking about, then shifting
to him by completing the long cross fade.

Digital Video Effects (DVEs) are transitions with attitude. These wipes,
flips, page-turns, etc. come in literally hundreds of styles, and every
one of them yells "look at me!"

That’s an important difference. Cuts and fades are designed to be invisible;
you pay no more specific attention to them than you do to the period at
the end of this sentence. Effects, by contrast, are intended to be noticed.

To resume our theater comparison, DVEs are like a vista: set changes in
which the transformation from one scene to another is done in full light
with the curtain up. Turntables spin, wagons rumble in and out, flats fly
up and down until, ta-DAAAA! the peasant hut has transmogrified into a palace.
In this style, the transition itself is part of the entertainment.

Normally, DVEs are more at home in short, snappy programs like commercials
and music videos; but they can also be useful in more sober applications.

In Figure 4, for instance, you need to cut some material from an on-camera
interview. The transition is tricky because the outgoing and incoming images
are so similar. A direct cut would make a clunky jump in the picture. A
dissolve would produce a slightly queasy impression, like a Star Trek character
going in and out of phase with space/time. But a simple horizontal wipe
signals an honest gap in the footage without calling attention to itself.