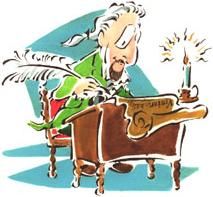 We live in a time in which we have unprecedented access to opinions. Never
before in the history of mankind have we had access to such a diversity
of information sources. Now we can truly participate in a robust "marketplace
of ideas" as Thomas Jefferson envisioned.

Jefferson wrote about his belief in the value of
diverse opinions in the Declaration of Independence:

"…a decent respect to the opinions of mankind requires that they
should declare the causes which impel them to the separation."

He also set forth these beliefs in the Bill of Rights. The underlying purpose of
the First Amendment was to facilitate a search for the truth, thereby empowering
all citizens to self-governance. The truth is revealed when all people have
diverse sources of opinion.

The writing of John Milton may have inspired Jefferson.
Milton wrote in his pamphlet Areopagetica, "No man can be sure
he has discovered the truth until he has examined all points of view and
is free to make his own choice. Give me liberty to know, to utter, and to
argue freely according to conscience, above all liberties And though all
the winds of doctrine were let loose to play upon the earth, so Truth be
in the field, we do injuriously, by licensing and prohibiting, to doubt
her strength. Let her and Falsehood grapple; who ever knew Truth put to
the worse, in a free and open encounter?"

Milton named Areopagetica for an ancient
Greek forum. Areopagus (pronounced air-ee-AH-pa-gus) is the name of a stony
hilltop next to the Acropolis in Athens, Greece. Around 500 BC it was a
place where democracy and freedom of speech saw one of its earliest flowerings.
The University of California, Berkeley established a similar forum during
the free-speech movement of the 1960s. Believing that freedom of inquiry
and discussion are basic and essential to intellectual development, the
University designated a "free speech area" in front of the administration
building as a place where individuals or groups could exercise these freedoms.
Both of these public areas were dedicated to open debate of any and all
issues.

In the past, bottlenecks in the flow of information from people wishing
to express an observation or opinion hampered communication. Illiteracy
was the greatest impediment for centuries; then it was the lack of mass
production and distribution of printed materials (Gutenberg helped solve
that problem). Publishing printed materials is a resource-intensive process;
however, only a few opinion holders have that privilege. In recent decades
TV has become a major source from which people collect information. TV production
and distribution were also resource-intensive processes, so again, very
few opinion holders have had the privilege. In recent years the costs of
TV production and distribution have changed dramatically. Inexpensive camcorders
are within reach of nearly every citizen. Their productions, though often
simple and unsophisticated, are hailed as "reality" TV by producers
and viewers. Videocassettes and the Internet are two other distribution
options that are inexpensive and accessible by the masses.

We are about to leave the Dark Ages, during which
the only well-distributed opinions are those of the information aristocracy.
We are entering an Age of Enlightenment, in which the democratic process
will extend to the dissemination of ideas and opinions by anyone to anyone.
The people will finally rule themselves. As Jefferson envisioned, when we
have a free flow of information, then we will truly self-govern. For democratic
rule requires independent thought and debate.

I believe that recent developments in inexpensive communications technology
may allow people to reach the truth. Satellites orbit the planet to bring
us sounds and images instantaneously. It has never been easier to distribute
opinions through the television (in the form of video) or computer (with
text on a Web site). The Forums on the Videomaker website are full of open
discourse about producing video and distributing it to audiences of every
size–from family living rooms to the world-wide Internet.

I believe that we at Videomaker, (as information
providers covering the collection and distribution of information), can
help you affect the beliefs and the behavior of your constituents in a way
that makes the world a better place. May the truth rise to the top.