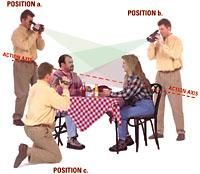 The atmosphere in a television control room during a show is tense and exciting. It is the dramatic high-point in the process of making television. Several cameras are laying down shots on videotape in real time. How can a videographer who only has one camcorder and no control room hope to produce anything nearly as slick and professional-looking? The good news is, not only can it be done, but it can be done without the tension and stress connected with most television programs, where the need to make a lot of instant decisions jacks up the stress level a few notches.

In the early days of television, every production was live. In order to match the smooth look and varying points of view of the movies, which audiences were accustomed to, television engineers developed the switcher. This allowed directors to switch instantly between two or more cameras, giving TV shows the look of edited film.

The audience cannot tell the difference between a show that is produced with several cameras and a switcher, or one produced with one camera and edited; the end product looks the same. The secret is to shoot with the editing process in mind. Here, then, are some tips on shooting for the edit, which, when used properly, will make your one-camera production look like it was shot by a team of professionals.

One of the advantages of the multi-camera shooting technique is the ability to dissolve between sources. This is usually accomplished with a device called a switcher or SEG (special effects generator). To dissolve between two moving sources in an analog editing environment, you need two tapes. (A nonlinear editing system, on the other hand, needs only one tape, even if you plan on creating transitions between multiple moving sources.)

If you shoot with just one camera, and plan on using an analog A/B-roll editing system, simply putting a new cassette in your camcorder creates the second source, called a "B-roll." Like everything else in a well-made video, you need to include this step in your original plan. When the script says, "DISSOLVE TO," it’s time to change to a new tape for the "dissolve-to" shot. It is helpful to number your tape rolls and list the numbers in the script as you shoot the scenes.

Note that, like everything in videography, this is not a hard-and-fast rule; there are a number of situations where the reverse is true. In an interview situation, for example, you might want to consider putting your interviewer on one side of the screen, then cutting to the interviewee on the opposite side. This can give the viewer the feeling that a real conversation is taking place, even if the material is highly edited.

Screen Direction
More important than screen position is screen direction. It is immaterial to the audience whether your heroine is walking north, south, east or west. All they know is that she is walking, say, from screen left to screen right. Subsequent shots in the sequence, then, should also show her moving from left to right.

However, you still want to vary your shots somewhat. You may even have the couple move around and change places from time to time. How do you keep all this straight? With a simple trick called the action axis.

The Action Axis
The action axis is an imaginary line on the floor that passes in front of the camera. When there is only one subject in your shot, the line runs through this person and (roughly) perpendicular to the camera’s line of sight. When there are two subjects, the line passes through both of them (see figure 1). As long as you keep your camera on the same side of this line, you can set up any shot you want and the subjects will always maintain the correct screen direction. Move across the action axis with your camera, and the screen direction will be wrong.

If your couple moves around and changes relative positions the action axis moves with them. Say you shoot a long shot with the people moving freely. Whichever side of the line the camera is on at the end of the shot is the side of the line from which you will shoot subsequent close-ups.

Another concept of the multi-camera technique is the difference between match cuts and cutaways. A match cut is any shot that includes some element or elements of the preceding shot; a cutaway is a shot that does not always include a part of the preceding scene but it is relevant. In our example, if you go from a two-shot to a closeup of the woman, that is a match cut because the woman was included in the two-shot. If you then cut to a closeup of the man, it is a cutaway because we did not see him at all in the preceding shot. The fact that he is part of the overall scene doesn’t make any difference.

Match cuts are used to keep the flow of the images smooth. We are always looking at something familiar. A show consisting of all cutaways would be confusing since we would never know where we were. However, the cutaway can be useful. One obvious device is to show something that the people on screen may be talking about. If the woman is talking about some flowers, include a cutaway of them.

Another important use of cutaways is to cover mistakes or omissions. Since a cutaway does not need to include anything in the previous shot, the viewer loses orientation for a moment. For instance, it can be used to take something out of the middle of an over-long shot. The cutaway will cover what would otherwise be a jarring "jump cut." Cutaways can often be used to solve problems in the editing stage, so the wise videographer always picks up a few.

All of these techniques were developed years ago in the feature film field. They allowed Hollywood to produce movies that flowed smoothly even though they were shot in short segments with a single camera. When live television came on line, camera operators devised the method of shooting with several cameras at once to get the same effect. However, to get the same final result, the cameras still had to obey the same feature-film rules. If you follow these rules it will make your pictures easier to edit and easier to view. Your audience won’t know whether you shot with one camera like Hollywood or several cameras like network television. They will just know that the end product looks good.