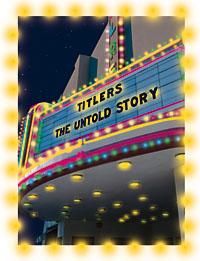 Chances are, when you’re watching a film or video production–whether it’s on the big screen, or in the comfort of your own living room–you probably don’t give much thought to the title rolling across the screen, or to the credits scrolling before your eyes. As viewers of video, we tend to take these production elements for granted.

As makers of video, however, the words we choose to appear on the screen, and the way we make those words look, must be conscious decisions. Whether you’re a beginner to the world of video, or a video aficionado, using a titler during the production process can add an entirely new dimension to your finished product and give it the professional look you’ve been searching for. But, just as using the perfect title can add to your production, using the wrong title or font style can have a negative impact on your production, and ultimately, your audience.

Here, we’ll examine the uses and features of titlers, both stand-alone and computer-based. We’ll look at the benefits they offer, and even offer purchasing tips. We’ll include a buyer’s guide to the current models so you can compare features. More specifically, we’ll talk to real videographers about four different titlers available on the market today. They are the DataVideo Technologies SE-300, the Videonics TitleMaker 3000, Curtain Call by Zuma Group and Alpha CG by Innovision. Let’s get started.

Stylin’ Titles
Let’s face it: the titling products available on today’s market–particularly the computer-based ones–can do some pretty complicated stuff. Special effects like animated transitions and transparent text can make for interesting and eye-catching titles, but they can also be distracting if used too much or in the wrong context.

Don’t underestimate the power of simplicity. As a videographer, it’s your job to evaluate how your titles should look, and how they can add to your video. Stick-on letters and posterboard offer quick and easy titling solutions, as do letters taken from alphabet soup or cereal. There are times when opting for simplicity is logical. On the other hand, there are times when using techniques like these is just plain–well, ridiculous. It might not be wise, for example, to shoot a title made up of rotini noodles from your kitchen cupboard on a video production aimed at landing a new client for your multi-million dollar company. (Unless, of course, your company is a spaghetti factory.) The bottom line is to match your titling techniques with the content of your production.

Just as important as the type of titles you choose to use is how you use them. Don’t get carried away. Chances are if you have words scrolling throughout your production in every scene, you’ll look like an amateur who just purchased a new titler. Be choosy about where you add your titles, and you’ll come off looking like you know what you’re doing.

Stand-alone Stars
There are a number of different titlers on the market today. Here, we’ll look at four: two stand-alone models and two computer-based types. They represent a wide range of capabilities and price points. Let’s begin with a look at the SE-300 Digital Video Illustrator by DataVideo Technologies.

First of all, the SE-300 is more than just a titler. Though it does perform the same job as many other titlers, putting text on the screen and performing simple transitions and animations, it also serves as a simplified graphics production tool. With the SE-300, you can grab an image with your camcorder, then add color, draw lines, and add text–all without a computer.

John Delancey, a videographer from Salem, Oregon, reported a number of benefits, along with some limitations, of his SE-300.

Delancey, who used the product to edit several home videos and to produce some basic titles on a cable access show, said that he appreciated the unit’s small size and its ease of use. He said the SE-300 was a good, inexpensive titler for home-video use, but the interface wasn’t very easy to learn. On the plus side, however, was the ability to capture and edit his own line-art drawings. "This really helped me to snazz up my titles with simple graphics of my own making," he said.

He did report, though, that the SE-300 has limited fonts, colors and sizes, and that the title quality is "blocky."

While the SE-300 might not offer some of the advanced bells and whistles of more expensive models on the market, beginning videographers might find its image-capture capabilities to be just what the doctor ordered.

If you’re looking for a titler that offers a number of font and design choices, the TitleMaker 3000 Character Generator by Videonics is worth considering. With 51 fonts and a simple user interface, the TitleMaker 3000 has become a popular choice among event videographers and hobbyists alike. With a price tag of $799, videographers can produce professional-looking titles without breaking the bank.

Anna Schneider, a mother of two from San Diego, California, admits the video bug has bitten her. After receiving a camcorder as a Christmas gift from her husband three years ago, she’s slowly improved her skills, and has moved from shooting home videos to producing documentaries in her spare time. She purchased a TitleMaker 3000 after reading a review of it in the April, 1997 issue of Videomaker.

According to Schneider: "I’ve been upgrading my video equipment piece-by-piece so far. After I read the TitleMaker 3000 review, I knew that would be my next purchase."

Schneider said she is pleased with her purchase, and particularly likes the TitleMaker’s keyboard, which is separate from the body of the titler.

"While I was fairly happy with the results I was getting with my first titler (the original TitleMaker by Videonics), I was ready for an upgrade. Since I had already used the TitleMaker, the TitleMaker 3000 seemed like a natural choice," she said.

In the Digital Department
Computer-based titling programs have become increasingly popular with the rise of desktop video. One such program is Zuma Group’s Curtain Call 3.0. This program runs $130, and offers videographers nearly endless combinations of fonts and designs to create titles. Aren’t crazy about a particular font? No problem. You can transform any font into something a little (or a lot) different, using shadows, outlines, metallics, 3-D extrusions, anti-alias, strobes, and many other effects.

John Grey is a desktop video enthusiast from Dallas, Texas, who uses Curtain Call 3.0 for his titling needs.

"A friend of mine introduced me to Curtain Call, and I got hooked," he said. Grey said that for him, using computer-based titling programs offer him more flexibility and a wider array of choices than some of the stand-alone titlers he’s seen.

"You just can’t do the more advanced effects with your basic, stand-alone titler," he said.

He added that using a computer-based program does have its limitations, however, and the primary one is portability.

"Computer systems don’t lend themselves to being uprooted easily," he said. "You’re pretty much confined to where your computer is."

Another computer-based titling product is the Alpha CG by Innovision. The Alpha CG boasts an unlimited use of fonts, text attributes and colors on each page with font sizes ranging from 5 to 999 scan lines. Its price varies from $399 to $799, depending on the version, and offers the PC-based video editor a number of unique titling applications, including image texture mapping, automatic edge options, drop shadows, underlines, outlines, scroll, rolls and more. In addition, you can export title pages in popular file formats and output resolutions for use in other video editing environments.

The Alpha CG comes in four versions: a standard version, a Fast Electronic version, a Pixelock version and an Alladin/Genie version. Its minimum system requirements are a PC computer with Pentium or faster processor, a super VGA card (32,000 colors or higher) supporting 1024×768 VGA resolution, 16 megabytes of RAM, Microsoft Windows 95 or Windows NT, 20 megabytes available hard disk space and a CD-ROM drive. Additional hardware is required for all but the standard version.

Grey, the videographer we met earlier, also has experience with the Alpha CG, although he hasn’t purchased the program yet. He said he was impressed with the options available on the CG, and would consider purchasing it in the future.

He did have a warning, though: "One drawback of computer-based programs," he said, "is that you need to make sure you have your computer set up to handle them."

"Make sure you have enough RAM and the proper operating system (like Windows 95, for example) before you make a purchase. You also will need some way to get the titles onto your video; a genlock or overlay card is the most common way to do this."

On Your Marks, Get Set, Shop
Titlers, whether they’re of the stand-alone or computer-based variety, offer you the chance to produce videos with a professional touch. Here, we’ve looked at the benefits that titlers offer, as well as the drawbacks of using too many titles–or the wrong types of fonts–in your productions. We’ve done an overview of four different titlers on the market, and even talked to videographers in the field who’ve used them. Now, the decision is up to you.

Before you make your purchase, do a thorough evaluation of your needs. Anticipate what you might need in the future, so you don’t outgrow your titler too fast.

No matter what your level of expertise, there’s a titler on the market that fits your needs. Be a wise investor in video equipment, and do your research before you set out into the shopping frontier.