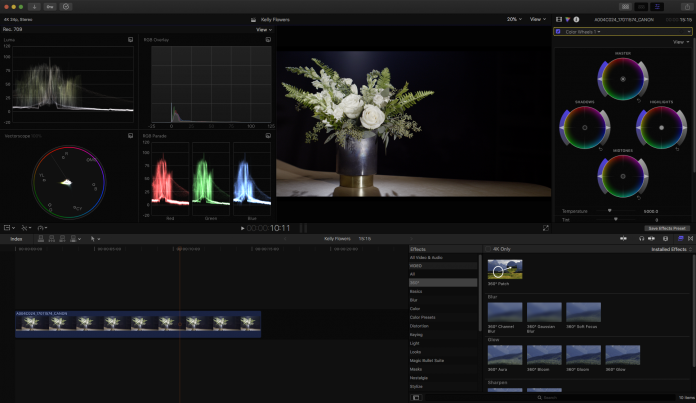 Final Cut Pro X 10.4 still gives the best value in professional video editors. The new features makes it contemporary and the update is available at no additional cost to those that already own a copy of X. And if you don't already own it, no worries, there's no other editor as robust for 300 dollars.

Final Cut Pro X (FCPX) has had a colorful past. Upon its release back in 2011, it was seen as a huge change from not only the prior releases but also a big departure from nonlinear editors as a whole. Some saw this as an abandonment of the professional editor. This might have been true, but it’s not anymore. Apple has adapted FCPX to work better with professional workflows with every update, including this one. Apple responded, not in kind, but in action and has made every update since 2011 free to FCPX owners. So if you bought Final Cut when it was launched in 2011, you've received all updates for free for the past 6 years. When you compare that to the other editors on the market, it’s likely other editor brands aren’t even supporting the versions of their programs from 2011. Owning a program for 6 years without being obsolete is quite remarkable.

There isn’t a huge list of updates for Final Cut Pro 10.4, however the list is full of heavy-hitting updates, starting at the top with 360 degree video support. Not only are you able to edit consumer 360 video, Apple gave support to professionals making high-resolution video supporting resolutions of 8K and higher.

Along with being able to cut and import 360 video, 10.4 allows you to apply glows, blurs and other effects to it. Further still, 2D and 3D titles can be made and placed within the equirectangular image. The update even spills into the new version of Motion, version 5.4. Round trip from 10.4 to Motion for more advanced controls and manipulation and then go back to 10.4 where the changes made in Motion automatically update in Final Cut.

There are a multitude of 360 degree video controls in 10.4. For example, you can change the orientation of the viewer for better control over where they look. A typical problem with 360 video after it's stitched together, you might have an incorrect horizon. In 10.4 you are able to correct the horizon, so the image is placed correctly to the viewer's eyes.

Another issue with 360 video is being able to see the camera rig itself. Be it the stand holding the camera, the shadow of the camera or some other part of the rig, it can be unsightly and pull the viewer out of the reality you are creating for them. 10.4 gives you a couple of ways to resolve these issues. The first is something that is typical in 360 editors: the ability to place an image or text over the area where the rig is, covering up the problem. This is clever, but not all work benefits from having a logo, text or image in them. In those causes, you are able to clone an area of the picture and use it to cover up the rig. If your shot is moving, this can be difficult, but if you are pulling from the scene in the direction you are going, it is able to be completely covered up.

How you preview when working with 360 video can be personal preference or in other cases it’s based on where you are in the editing process. No matter if you are previewing the final playback, or wearing a headset during the editing process, 10.4 gives you flexibility. You can choose from viewing through a headset with headset control of the viewable area, in equirectangular view, that gives you a panorama style view of the whole image area and lastly view what the headset would see with control over the viewable area within the editor for those that don’t have or don't want to use a headset, but need to see what the final product will work. Just like with 360 titles, headset control and other 360 viewing options are also available with in the new version of Motion.

10.4 gives new expanded color control through a few intuitive additions to some very common tools. The first is the addition of hue, saturation and brightness control with in color wheels. We found that not only their location, but how granular the control is very intuitive to use. Along with color wheels 10.4 has a full set of color and luminance curves. Curves control is not new to editors, however, Apple took the classic curves a bit further. Use the eyedropper to choose a color value and the curves will indicate where that value lies in the curves. This makes selective curve adjustments much easier to achieve regardless of the amount of color you want to adjust, big or small.

Continuing, Apple made the color inspector better too. 10.4 now opens a new pane within inspector for color. It opens automatically when an effect is applied and can be saved as a custom workspace. This is a good feature, and we are glad to have the feature. But why did it take this long to make its way into the FCPX work space?

The updates in 10.4 are nuanced. No matter how small, the changes are mostly innovative and intuitive, but are hardly mindblowing. That said, they are completely necessary to let Final Cut continue to be a viable choice for professionals. 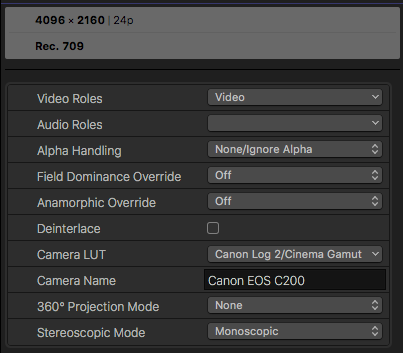 In the eye of progress, Apple offers a few more new features. 10.4 now gives users a HDR workflow with support for Rec. 2020 HLG and Rec 2020 PQ.  Apple updated scopes for HDR allowing for the waveform monitor to show up to 10,000 nits and allows for HDR monitoring with third party I/O device and of course an HDR monitor. However, we would have loved to have seen simulated HDR preview without the need for a new piece of hardware.

All of these final updates are not major but are worth mentioning. If you're a iMovie user, or want a mobile option for your editing, you can create a cut in iMovie on a iPhone or iPad and import that project into FCPX with all edits and effects intact. Editors on the go will find this helpful, and because it ties in to iCloud, another system can pull all the data from it and bypass messy file transfers.

Because Apple iPhones now capture HEVC or H.265 video, the new Final Cut, Motion and Compressor all support it. Plus, Canon C200 users will be able to use Cinema RAW Light natively.

In this type of workflow, many RAW shooters will shoot in log. 10.4 will identify that your footage was shot in log and automatically apply a Rec. 709 LUT to all log footage. It's smart enough to tell you if you're shooting v-log, s-log2, c-log or any other log and apply the right LUT. Additionally, if you require a different LUT, you can turn it off, and apply a different LUT.

Lastly, because of the updated format support, the new version of Compressor, version 4.4 allows for those new formats to be exported. HEVC or H.265, HDR, 360 video and Enhanced MXF export have all been updated.

We reviewed Final Cut Pro 10.3 last December and the marketplace hasn’t changed much. Because FCP 10.4 is a free update or is 300 dollars to buy if you don't already own a copy, it’s a great value. We compared that value against Adobe Premiere CC, Avid Media Composer and more in the review for 10.3, so if you want to know our input on that, check out that review.

Apple made some great improvements and its value can’t be beat. Offering these updates free to users that already own Final Cut Pro X is the right thing to do. For those that don’t own it, 300 bucks aint bad.