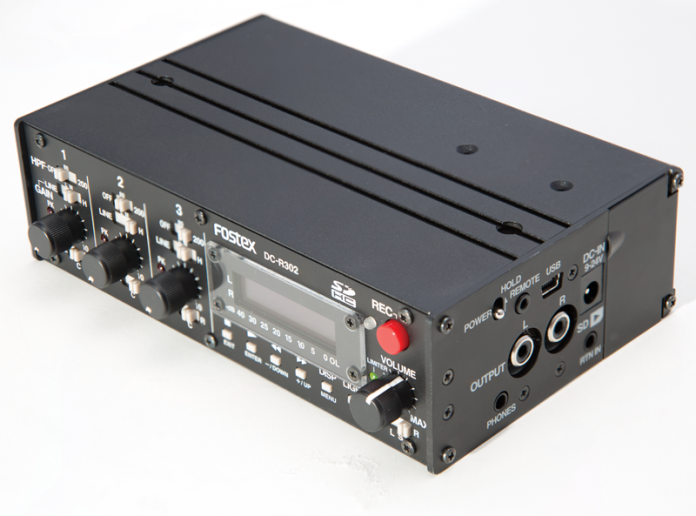 How many times have you found yourself with the need of a more robust and capable audio function when shooting a DSLR? Fostex has your answer with the DC-R302. It’s the perfect addition to the DSLR shooter. Mounting easily underneath the camera, the DC-302 offers easy-to-read meters, separate gain pots and a slew of monitoring options.

The DC-R302 is a three-channel audio mixer that records in stereo. That means you’ll need to share channels if you intend to use all three inputs at once. It offers the option to record up to 24bit at 96kHz. Each input features very quiet pres and allows recording at line level, low, medium or high XLR input.

DSLRs are notorious for offering weak audio recording options. If your shoot demands multiple inputs, monitoring the audio, or quieter inputs, you’ll be out of luck. However with the built tough DC-R302, you can achieve greater quality audio and have easy-to-monitor inputs with individual phantom power, gain control and an easy to read meter.

The satin black finish blends into many DSLR bodies, and the unit is no wider than the camera that’s meant to be mounted on top of it.

The XLR inputs are all on the left side of the box, offering plenty of space between each for easy connection. A phantom power switch sits just above each input. On the front, there are three gain inputs, each with three modes of high pass filter – off, 80 and 200. There is an easy to see and read meter with a simple menu and shuttle controls. The big button is — you guessed it — the record button. There is even a monitoring pot with the capability to monitor return from camera, Left channel, Right Channel and Stereo (Left and Right).

On the right side, you’ll find the power switch, USB out, IR remote control, DC in, Return in, phones out and RCA Left and Right output. This is also where you find the SD card slot and space for four AA batteries.

Overall, this simple box weighs a little more than 1.5lbs (690g). Threaded mounting holes are found on the top and bottom, making it easy to connect to a tripod’s mounting plate and to the bottom of the camera. One thing to note is that if you want the DC-R302 to run off anything besides batteries, the optional DC power will need to be purchased separately.

To test this little black box, we mounted it to the bottom of the camera. For this review a Canon 7D was used. This attachment process was straightforward. Then, we mounted the tripod head’s mounting shoe. Again, very easy, no issue at all. Overall the camera and the DC-R302 fit together well, not looking out of place, or limiting any use of controls on either the camera or the box. The camera battery is no longer accessible, but because mounting was so easy, this is not an issue.

Once mounted to the camera, we mounted three inputs. The first and second being lav mics and the third a shotgun mic. This is where we found the first shortcoming of the unit. You cannot choose to record three separate channels, but have to mix them to stereo. We chose to pan both of the lavs to the left channel and the shotgun to the right. Because we were shooting an interview, both people being interviewed didn’t often speak at the same time, and their inputs were similar, so they could share a channel. The shotgun was used to add some ambiance when needed, and also to work as a backup if hard Ps or Ss came out and effected the lav mic in a negative way.

The test showed the quality of the mic pres. They were very quiet. Neither of the lavs needed phantom power, however the shotgun did. It worked as it should, offering +48 to power it. None of the mics needed a high pass filter and medium input was used for optimum range. When using an audio device separate from the camera, it's paramount to slate your audio. However, this step is often easy to forget. When paired up with the infrared control, it slates each track with a tone, to make syncing audio simple in post-production. The next test was using it as a USB device recording directly into a computer. Using Adobe Audition CS6, it operated as it should and was very easy to choose as an input.

Overall the Fostex DC-R302 functioned as designed, and worked simply with a DSLR camera. However there are a few things that missed the mark. The first is the price tag, The Zoom H6 offers far more flexibility, more inputs and is just as easy to use but is far less expensive. Second, recording only in stereo but with three inputs was an odd design choice and forces on-the-spot forever choices regarding input groupings, instead of having flexibility in post.

The DC-R302 is rugged, simple to use, offers great mic pres and has every little option one might need, with a few drawbacks. It was designed for DSLRs and would find an easy fit with most DSLR shooters. The price and stereo recording input sharing make it a hard choice over its cheaper and more flexible competition. It jumped through the hoops, it functioned great, but just didn’t muster enough to wow this reviewer.