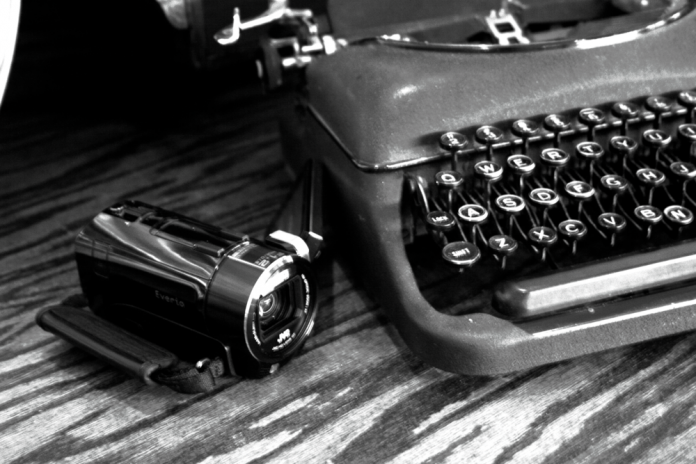 So you've got a great idea for a video project and you want to get some people to help you do it. If it's really simple like “I want to get video of the sun coming up over that hill while the kids drop pumpkins from ladders as the tune of the 1812 Overture plays,” you can just tell someone. But if it was that simple, you wouldn't need any elaborate help. When your ideas get big, you need to write them down. When you need the help of big people, you need to write your ideas down properly.

How you present your script is the equivalent of how you would present yourself for a job interview. I am assuming this is the best you can do or be.

“Formatting, typos, proper cover page (with the title, authorship, date and contact information) all matter to me,” says Sandy King Carpenter, a Hollywood movie producer and former script supervisor whose credits include Sixteen Candles, The Outsiders, They Live, Big Trouble in Little China. “Passion goes into the idea behind the work, but discipline goes into creating it and carrying it forward. How you present your script is the equivalent of how you would present yourself for a job interview. I am assuming this is the best you can do or be.”

So with that in mind, let's look at how to best present your ideas in a way.

What is a screenplay and how is it different from a TV script?

Many of you working in industrial and corporate video may already be very familiar with scripting. Today many TV shows are written like mini movies but some, like news shows and advertising still use the “split page” format, also called A/V (audio, visual) format. This divides the page into two columns, one describing the visuals, and the other with sounds such as dialogue, effects, etc.

For more on the types of video that often use A/V formatted scripts, see Writing Effective Narration.

TV dramas typically use the screenplay format which is written like a play – action is described and dialogue written in a single column.

Here's an example from an episode ofFrasier, “Fool Me Once, Shame on You. Fool Me Twice…”, written by Christopher Lloyd in 1995.

You'll notice that only the character movements important to understanding the dialogue are mentioned – Eddie (the dog) looking at Frasier, and people entering the room.  All the rest of the blocking is left for the director. Don't worry though about having to figure that all out right away, there's lots of software to help you, we'll take a look at that next.

Celtx is a free screenplay writing software (the plus version is $15 and includes some extras like clip art and the ability to customize your desktop). Celtx includes a number of templates not just for screenplays, but also A/V scripts and radio plays.

Trelby is also free software which includes not only templates but more than 200,000 names from numerous countries which can help if you're stuck for a character name.

Final Draft is the best selling screenplay writing software – clocking in at $250, it's not cheap, but it boasts “for the last 20 years, nearly every film and TV show has been scripted with Final Draft software.” There's a free trial version as well as templates for different types of script and even special pricing for non-profit producers.

How to Get Started

While your story may be complicated, you need to be able to explain your plot very simply; which means you must know how to write a good script, and how to get people interested in reading it – which means, at the beginning, telling your story in a single paragraph. Seriously? Yes. Condense your story into the broadest strokes. From there, write an outline of the script and include the major plot points. You'll then use this outline to create your “treatment” – which is a description of the plot, usually around four pages long — for the most part, it won't include any dialogue, and will simply, though grippingly explain what happens.

“Just as a script is the beginning and the basis for every movie, television show or other visual presentation,” she says, “it is also the basis for the creative collaboration that begins when it crosses my desk. Just on the surface, it indicates not only your ideas, but what you will be like to work with.”

There are a number of movie treatments available on line. Let's take a look at a 1972 draft by Paul Dehn for the movie Battle for the Planet of the Apes – the final film in the original Planet of the Apes franchise. In the treatment Dehn describes the action, occasionally incorporates important dialogue, describes the motivation of the characters – why and how they are important, and tells the story of the film in a few compact pages. This lets people sitting around a table somewhere in Studio City, Calif. decide whether or not they want to commit a million and a half dollars into his idea. Let's take a look at some of his exposition, where he describes the decision making process on theBattle for the Planet of the Apes

The Orangutans are a minority faction, but their two votes in the Council can be decisive in the event of a deadlock between the three Chimpanzees and the three Gorillas. We must watch Zeno. At the picture's end, he will become the Lawgiver retrospectively referred to in “PLANET”. In the SCREENPLAY we shall more fully establish the character and viewpoint of each faction-leader during the brief debate that follows Caesar's opening statement.

Here he's telling us something that we may not get from dialogue, but it explains why certain characters are important, why some might ally with others, and what their belief system is, all in very broad strokes. This will help people reading the treatment to understand quickly the motivation behind the action of certain characters at a later time.

Typically one page of script equals one minute of screen time – this is what people will be expecting when they read it; a 60-minute script means a one-hour show. Most dramatic movies and TV shows are based upon the three-act structure – this means that the action can be divided into three parts:

Act two will be the longest of the three parts and have the majority of your action in it. Act three might only be a few minutes long.

After years of opening thousands of envelopes and reading thousands of scripts, Carpenter talks of some of the most annoying pitfalls she's seen and warns of not properly following the story structure:

“If you are only writing a script because you have a cool scene you want to shoot, put it back in the drawer unit you have something to say that the scene will fit into because it will have no meaning without context. Three act story structure works, even if you cut it up and toss it in the air and rearrange it to do a flashback movie like Memento. You must have SOMEWHERE in your story a setup, an encounter or conflict and a resolution. Something must happen. Your characters must have an arc. Your story must have an arc. Or not…and no one will care.”

“How do I know when I've got the right one?” says Carpenter, “When from that opening line…that first ‘It was a dark and stormy night…’ I can't put the script down and I don't pick up my phone when it's ringing.”

In order for you to progress with your project, the next step is to begin critically examining story structure in the movies and TV that you watch – try to identify the three acts in each. Also spend some time on the Internet examining the form and structure of TV and movie scripts. As well as reading long movie and TV scripts, have a look at some short film scripts and see how they managed to segment the three-act format in less time. Being clear and concise will help you get your point across and attract the sort of people you need to get your project to come to fruition.

Section of an A/V [Audio/Video] script[/caption]