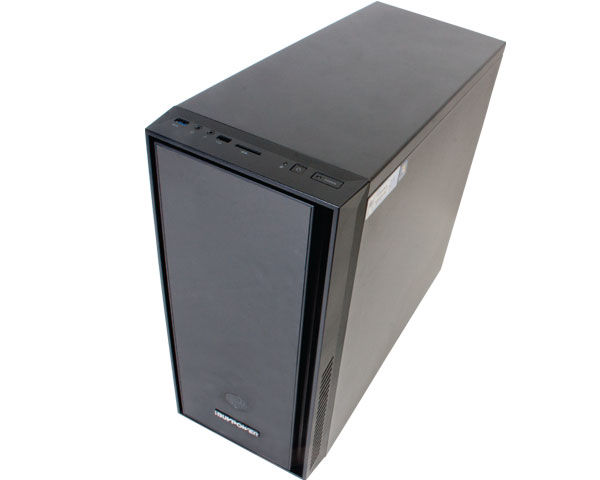 iBUYPOWER specializes in building customizable workstations and gaming computers. Only name brand parts are used to ensure high quality and reliability. Unlike many big name computer manufacturers iBUYPOWER offers many customizations to ensure you get the computer that’s right for you. The latest in their Professional Series lineup features the new Xeon E3 CPU; not the fastest Xeon but the best bang for your buck.

What’s It Made of?

The pro-series offers six different computer case options. The workstation we looked at was built with the Cooler Master Silencio 550 gaming case. Out of the available options is perhaps the sleekest in design. The case is plain black with a magnetic swing-open front door to access the DVD drive. On top of the case are USB 2.0/3.0, headphone/mic jacks, and an SD card slot. The only thing missing up front is an eSATA port which can be found in the back. A unique feature that iBUYPOWER offers is a sound reduction system; the sides of the case are padded with noise-reducing foam and quieter fans are installed. If you prefer LED lights and a fancy case, those are available as well but for a professional look, stick with the CoolerMaster Silencio 550.

The staple components of the pro series are the ASUS P8B WS motherboard and Intel Xeon E3-1270 CPU. Though the CPU can still be beat by some of the six-core Xeon’s, it comes in a close second. The eight thread quad Core Xeon E3-1270 clocks in at 3.4GHz and is capable of 3.8GHz with turbo boost. The motherboard that the CPU is plugged into has just about every onboard feature there is and four PCI-express 16x slots!

The NVIDIA Quadro 4000 video editing card is the most expensive component in this computer. The card has two DisplayPorts and a Dual-link DVI for connecting your monitors. The card supports a maximum resolution of 2560×1600 and has 2GB of video memory. If you are using any 3D modeling programs this is an excellent card. If you only plan on editing two-dimensional video, iBUYPOWER offers 25 other graphics.

An important consideration for video editing is having multiple hard drives to distribute your work load. The primary drive is a Kingston HyperX SSD and the data drives consist of dual two terabyte hard drives in RAID 1. The end result is fast rendering, fast program execution and a backup of all your work with RAID 1 in case of a hard drive failure.

No editing workstation would be complete without a way to transfer and store your video. As you might expect from a gaming-focus company, the pro-series makes every effort to be inclusive of a multitude of media. The 12-in-1 card reader supports most storage mediums that video cameras use, including: CompactFlash Type I/ II, SD/SDHC Card, miniSD, MultiMediaCard (MMC), RS-MMC, Memory Stick, Memory Stick PRO, Memory Stick Duo, Memory Stick PRO Duo, SmartMedia and xD-Picture. To top that off you can burn video to any DVD format desired. This machine is ready to finish your work to just about anything a client would expect, even if you need to turn out more than 20GB on a single disc, a Blu-ray burner is also offered at an additional cost.

SSDs are by far the fastest hard drives available on the market. The Kingston HyperX SSD boasts 555MB/s read and 510MB/s write speeds. When bench-marked, however, it only achieved 375Mb/s read and 113 MB/s write, which is still plenty fast. The biggest advantage to an SSD however is their access time, which is a mere 0.2ms. A fast access time means programs and files open more quickly so there is less time waiting for the computer to respond. In comparison, the dual 2TB hard drives pulled in 116MB/s read, 115 MB/s write, and 16ms access time. Though not as fast as the SSD they more than make up for it with their storage capacity and data redundancy for video files.

In 3D modeling benchmarks this computer beat almost all previously reviewed computers and came in tied with the HP EliteBook 8760w. These scores are primarily driven by the video card and changing to a more expensive card would likely put this machine over the top.

More scores can be found at www.spec.org. The 3DMark Vantage scores are not the best recorded but place this computer better than most mid-range computers and just below high-end machines. More scores can be found at www.3dmark.com. Our machine did not get the best Windows experience index scores, but it did have a good overall score. Most previously reviewed computers have had bottlenecks in hard drive performance which can slow down response time in file heavy programs like Adobe Premiere Pro.

The iBUYPOWER professional series workstation line offers everything a video editor would need. At $3,000 the price is also reasonable when compared to other reviewed workstations. In addition, all units come with a three year labor and one year parts warranty. The warranty is upgradable, but usually if something is going to fail it will be in the first year. With the various available customizations, this workstation has a cost range of $1560-$5000+. If the price tag is too high, iBUYPOWER offers a similar core i5 setup starting at $899.

The professional series from iBUYPOWER offers everything you would need in a workstation.