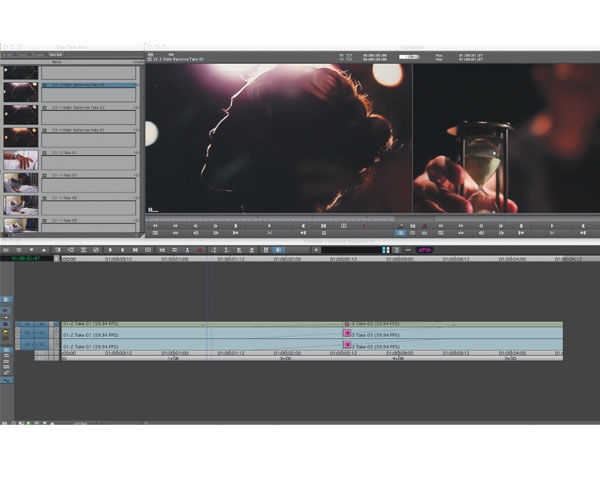 Ever since introducing Media Composer back in 1989, Avid has claimed a large section of the video editing market by making its editing software a standard for others to live up to. This was due not only to Avid’s early foray into the world of nonlinear editing, but as a direct result of its strong media management support and useful editing tools. However, with so many editing programs on the market today, Avid has more pressure than ever to make every software update count. With the release of version 5.5 of its popular Media Encoder editing software, Avid is clearly looking to do just that.

The answer is quite a bit… for a point five update that is. In keeping with its recent policy of third party hardware support, Avid has added the ability to capture, monitor, and output with AJA Io Express in Media Composer. It has also added the HDCAM SR Lite codec to its popular Avid Media Access tool, more support for control surfaces from their recent acquisition of the Euphonix company, along with better search capabilities with the exciting new PhraseFind tool, better integration with their extremely successful Pro Tools audio software, and the ability to tweak transitions with the Smart Tool feature. With these new tools and updates, Avid is showing that it has no intention of giving up its highly respected spot in the editing world.

When Avid announced support for the Matrox MXO2 Mini at NAB 2010, it literally sent shockwaves through the editing world. Up until that point, the only way to increase the quality of video capture and to monitor high quality footage in real-time was with their specialized Nitris DX and Mojo DX hardware which could cost a pretty penny. With the support of the MXO2 Mini, Avid was signaling its intention to give its editors more cost effective options for capturing and monitoring video, putting Avid editing back into the hands of the smaller shops.

In this release, Avid has not only upgraded what the MXO2 Mini can do (it now supports SD 23.976, 720p 23.98, 1080p 23.98, 1080p 24, 1080p 25, and 1080p 29.97), it has extended their support to other popular devices like AJA’s Io Express. The Io Express has the ability to capture SD and HD footage over SDI under Media Composer control making the Io Express a great middle-of-the-road hardware solution that is more powerful than the Matrox MXO2, without a huge price tag to match. This now means that Avid editors have the choice between two major monitoring hardware manufacturers along with Avid’s own devices making the Media Composer more flexible and affordable than ever.

On the Avid side, there is also a new hardware module for the Nitris DX chassis that can accelerate the render intensive AVC-Intra codec. This enables built-in AVC-Intra encoding and decoding in real-time and in multistream timelines. For those using Panasonic’s tapeless camcorders, this will be a useful hardware update to get.

Another great feature of Avid Media Composer is Avid Media Access. For those who aren’t familiar with it, the AMA is Avid’s solution for supporting certain media types without having to transcode them first. In the past, no matter what codec you filmed with, it would have to be transcoded into Avid’s high-quality DNxHD codec for smooth playback in the Media Composer software. This not only required time for the re-encoding to take place, but essentially doubled the hard drive space it took to store the footage.

For editors working on documentaries and other large-scale projects, this posed a real problem. As a result, in the previous update of Media Composer, Avid included the ability to edit QuickTime, Apple ProRes, H.264 video files, and Canon XF and XDCAM codecs natively. Now in its newest iteration, Avid has also included support for Sony’s HDCAM-SR Lite and SR SQ codecs, which are a new file format for Sony’s tapeless camcorders. If that weren’t enough, you can even download new codecs from Avid or camcorder manufacturer’s websites as they become available. This is an incredibly helpful feature that will help Media Composer compete directly against many of the other big editing software companies which all have similar support for multiple formats.

One of the most powerful and unique features of Avid Media Composer is PhraseFind. PhraseFind is a dialog search tool powered by Nexidia technology. The tool will go through all of your footage and audio, indexing them to a language you’ve set. Once it’s done, every clip you import into Media Composer can be searched phonetically. Results are tallied in a window, which includes accuracy scores. A high number such as 80 to 90 percent represents a good score while a low number such as a 40 or 50 percent indicate that you should probably keep looking. We were surprised at the accuracy of this tool though we also found that due to its phonetic searching method, PhraseFind could often find results you really didn’t want. For instance if you searched for the word “sight” you would get results for every word that sounded like it including site, cite, and recite.

Nonetheless, we found this tool to be incredibly useful as it saved us from having to scrub through hours of footage to find the takes we wanted in our edits. It was also amazingly efficient as a way to organize footage since it eliminated having to assign metadata to every clip in our project. There is one caveat however. PhraseFind does not come with the Avid Media Composer suite. It is a separate tool that costs $495. Even so, the tool is so useful that many editors will want to buy it even if it costs a bit extra.

When Avid released the Smart Tool in version 5, it did so to mixed reviews. Many of Avid’s newest editors loved the ability to quickly manipulate the timeline with tools that were familiar to most Adobe Premiere and Final Cut Pro editors, while veteran users found the tools to be distracting and even somewhat buggy.

With the release of version 5.5, the Smart Tool in Media Composer has not only fixed many of its initial bugs, it has also added the ability to alter transition duration and location by dragging on the transition icon in the timeline. This feature makes Avid’s interface and workflow even closer in design to its competitors which will make it easier for editors using other software to quickly get comfortable with Avid’s interface.

In addition, Avid has also added more support for it’s popular Pro Tools audio program by including 20 of the Pro Tools AIR audio plug-ins. This adds to the growing library of RTAS audio filters that version 5 gave editors. With these new audio features, Media Composer is quickly becoming an audio powerhouse that will be tough to beat.

A Suite of Software

Much like Final Cut Pro Studio and Adobe’s Creative Suite, Avid also includes a suite of high-end software that any editor can love. The best part of all is that it is a package that on its own would cost thousands of dollars to purchase. It includes Sorenson Squeeze, an advanced encoding software, Boris Continuum Complete and Avid FX, both for making and compositing advanced effects and titles, SmartSound Sonicfire Pro for easy to edit stock audio, and Avid DVD for DVD or Blu-ray authoring. All of the software can be used on both a Mac and a PC with the exception of Avid DVD, which only works on Windows.

Being such an advanced piece of software means that Media Composer can be quite daunting at first glance. It seems Avid is well aware of this fact since they included an entire disc of lynda.com training for Media Composer. The training is easy to follow and does a great job of quickly getting you prepared to get the most out of your editing software. This will undoubtedly come as a relief to those who may be picking up this software for the first time and will make it easier for Avid to add even more users to its large and dedicated user-base.

It should also be noted that this version of Avid Media Composer doesn’t support the 64-bit architecture, but that will change in version 6, which was announced this past November.

With its proliferation in large production houses, advanced media management controls, valuable suite of products, and user-first approach, Avid’s Media Composer is a force to contend with in the editing world. Though it may take a while before you feel comfortable using its advanced features, the time you can save using them makes this software a solid buy for any advanced editor.

Memory: 4 GB of RAM (6 GB of RAM recommended for Windows 7 and Vista)

Graphics Card: NVIDIA Quadro FX family (FX 560 or higher) with a minimum of 128 MB of graphics memory for full-screen playback

Graphics Card: NVIDIA GeForce family or ATI Radeon family (as supported by Apple) with a minimum of 128 MB of graphics memory for full-screen playback

Laptop users: Support of uncompressed video on laptops is limited to one stream of uncompressed SD except for Windows based Intel Core i7 laptops (Quad Core with Hyper-Threading) with eSata external storage which can play multiple streams of 1:1 uncompressed SD.

With its top-of-the-line media management tools, generous suite of high-end software, and impeccable history, the Avid Media Composer 5.5 suite is perfect for any editor who is looking to take their editing to the next level.

Dan Bruns is the Associate Multimedia Editor at Videomaker