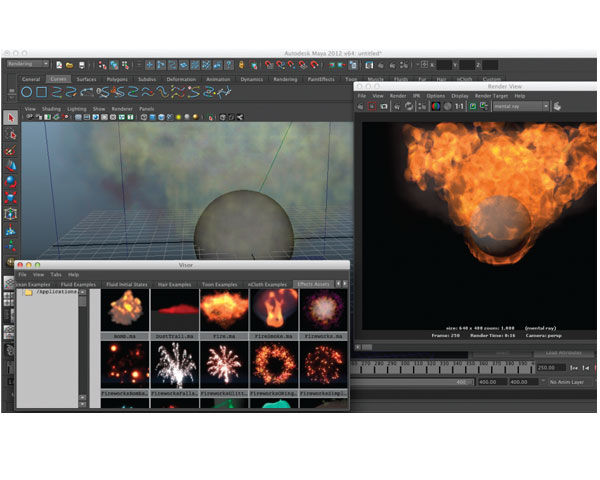 Maya 2012 has the promise of better workflows with faster exchange between packages, higher performance, and more tools than ever before. But is it really the holy grail of 3D graphics packages?

Maya was developed by Alias | Wavefront (at that time a Silicon Graphics company), and Wavefront was the first ever “off the shelf” animation software. (Before that, if an effects house wanted to do computer animation, they had to develop their own software – like Pixar, ILM, and Rhythm & Hues did). So, when Alias | Wavefront merged its next generation technology into Maya… the animation world was excited. Since that time, Maya has led the industry in animation and special effects. Now an Autodesk product (along with Softimage and 3ds Max), it would be a challenge for anyone to find a high-end effects studio without Maya as part of its arsenal.

Impressive history, but Maya has always had an issue: Its complexity. When you have the power to play god, and create entire worlds with your own rules of physics, and organisms, the complexity that goes along with it can be a little… daunting. Maya 2012 is no exception. Of course having that power is über cool, and again, Maya 2012 is no exception.

In computer animation, rigging characters has always been a difficult task at best. But with the characterization tool in Maya 2012, it’s conceivable to completely rig a character with complete IK and FK chains in less than 30 minutes. (Otherwise, this type of results could take many days). Having several pre-fabricated skeletons, and tons of control in an easy interface will have animators saying “sweet” at least once every couple of minutes.

Mudbox… oh, how I love thee! Since the inception of Metanurbs in LightWave, and then Subdivs in Maya, Animators have dreamed of modeling in a computer using tools suited for clay. Some companies with large budgets actually do model in clay and then “digitize” the model into computer geometry. Mudbox is a modeling tool that allows you to sculpt – not merely model, with an amazing degree of control. New tools (UV-less painting for example) enhance your creativity, and drastically decrease your creation time.

Viewport 2.0 is definitely faster and better. But something to really get excited about is editing motion paths, (and their tangents) without having to use the motion graph. Graphs were cool in their day; but how many times have animators rendered out a project just to find that something they did in the graph editor led an object right through another object, or left it floating just above ground? Now, animators truly have an interactive and intuitive interface to adjust motion paths!

Maya 2012 is fully integrated. Sounds like a buzzword, right? Autodesk made the suite with the capability of instantly sending assets between packages. If you are modeling in Maya and want to make some details like “pinching” clay? Send it to the Mudbox! Want to use the ICE engine in Softimage? Oh yeah… did we mention the suite comes with Softimage? Send it over! With just a few clicks, you can easily bounce seamlessly between packages.

Seriously, a book could be written about all the new features; like node-based render passes, craft animation tools, NVIDIA PhysX integration, the new übercam, effects assets, and the list goes on and on.

Now for the flip side. The documentation is woefully inadequate. Even someone like me (a user of Maya since version 1.0) had a difficult time figuring out one simple button to make the characterization tool spring to life. In the distant past, Maya came with an entire shelf of books. Now, it comes with a PDF that reads more like a sales pitch than an actual help file.

But hey, we’re in the age of the Internet. And thank the stars that the animation community has no problem sharing knowledge. So, problem solved. It’s just unfortunate that developers rely too heavily (in general… not just Autodesk) on the user community to pick up the slack for their lack of documentation and support.

The only other major shortcoming animators may endure is that not all of the packages this suite has to offer cross over to all the platforms to which it is marketed. Regardless, most production companies have at least one Windows machine somewhere.

Maya 2012 is more than a collection of packages. It’s a war chest replete with tools that are well thought out and masterfully crafted. The software is extremely stable, highly useful, and immensely efficient (one of the systems we tested it on was a two-year old Mac mini!). The bottom line: Maya Entertainment Creation Suite Premium 2012 is über cool.

Autodesk Maya Entertainment Creation Suite Premium 2012 is by far the most powerful Maya suite to date. Immense improvements in the interface, dynamics, character animation tools, etc. allow you to create faster than ever.