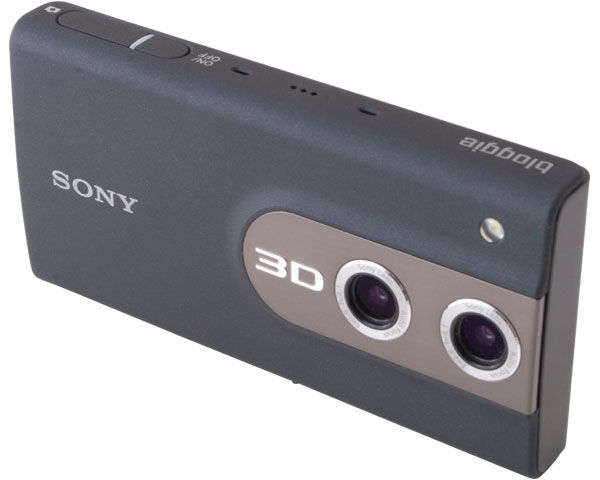 With portable 3D capture still in its infancy, manufacturers are quickly vying for position as they race to place this exciting capability into the hands of consumers. Sony enters the fray with the MHS-FS3 3D Bloggie HD camera. As with all early entries there are some weaknesses, but there is no question that the 3D Bloggie HD is going to be a strong contender.

Packaging is very minimal as the 3D Bloggie HD comes pretty much complete and ready to go. It is accompanied by a wrist strap, USB connection support cable and some basic instructions. The internal battery is charged via the USB arm and the 16GB storage media is built-in, so there is no need for battery, charger or media card. One item we would like to see included is an HDMI cable. While 3D viewing is possible on the built-in display, one should view their footage on a 3D capable television to fully enjoy the 3D experience. The unit comes preloaded with the necessary software, so you won’t find a CD included either. 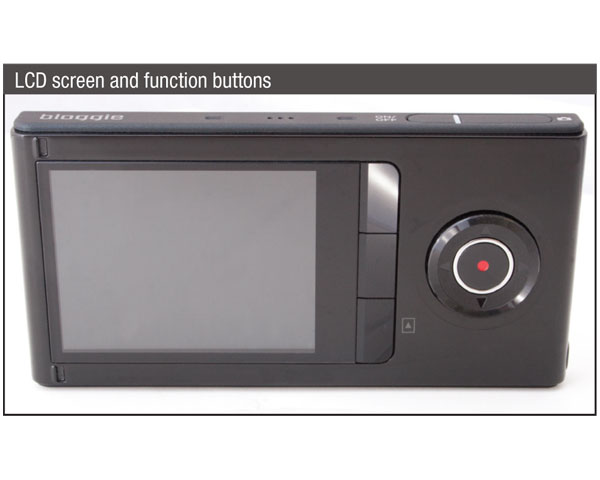 Similar in size and appearance to a cell phone, the most striking feature of the 3D Bloggie HD is the dual lens arrangement on the front of the camera with the letters, “3D” emblazoned proudly next to them. The lenses are by Sony with a maximum aperture of f2.8. A video light is placed above one of the lenses to aid with shooting in those dark places. The front and sides are clothed in a rubberized material that improves grip and minimizes fingerprints.

The top edge has no ports or other features at all while the bottom is home to the tripod mount. Down the left side of the camera (facing the front) are the stereo microphone, speaker, power button, charge lamp and shutter button. Along the right side are the pop out USB arm and release switch, the HDMI Out port and mounting point for the wrist strap.

A goodly portion of the back of the device is home to the 2.4″ LCD screen, which automatically orients itself depending on how you’re holding the camera. Be prepared for a legitimate “Wow!” moment when you turn on the 3D Bloggie HD. When shooting in 3D mode your view through the display is in real-for-true, genuine 3D – with no glasses required! At the bottom of the screen, (when held vertically) are three buttons for playing your creations, toggling between 3D and 2D recording and accessing the menu. Menu options are pretty sparse as most features we would like to have control over are set to automatic including ISO, white balance, shutter speed and focus. Below the function buttons is a navigational pad with the record button at its center. Depending on the particular function button selected, the left / right, up / down arrows may be used to adjust or access the self timer, video light, volume and zoom; select clips for playback, deletion, protection and sharing; as well as to choose the desired recording mode.

Operation is simple and straightforward. Turn the unit on, select 2D or 3D recording, frame it up and press record. When you’re finished recording connect the unit to your computer via the built-in, flip out USB arm. Plug the arm in with the camera powered off and it recharges the battery. Plug it in and turn the camera on and it goes into mass storage mode. The computer’s operating system recognizes the camera and fires up the Bloggie software (which you had previously installed, of course). Editing capabilities are limited at best, but here you can download your files from the camera, tag, trim and share them in a number of ways including upload to Facebook or YouTube.

It’s worth noting that in 3D mode, the camera’s design requires it to be held horizontally, in the landscape position. In fact, if you attempt to record 3D vertically, a reminder appears stating that the camera must be held sideways. For optimal recording of motion in 3D the camera itself should be stationary; it is unfortunate then that the tripod mount is located on the bottom of the camera, as that forces a vertical orientation. Perhaps Sony will include a swivel-ball-mount tripod adapter with their next iteration of the 3D Bloggie HD to solve this issue.

With a small 1/4-inch sensor and the inability to manually control things like white balance, one has to expect less than perfect results. That being said, however, the 3D Bloggie HD produces very believable 3D HD footage whose depth is undeniable. It also shoots video in 2D with high quality stills in both 2D and 3D formats. For all its lack of manual controls the auto settings do a decent job of adapting quickly to scene changes and reproducing color fairly accurately, albeit a bit oversaturated. Handling of low light situations is impressive considering such a small sensor and the on-board video light helps a great deal in dark places. Audio is typical compact camcorder fare with no options for controlling levels, wind cut or sensitivity.

If you want bells, whistles and lots of manual controls then you’ll definitely want to look elsewhere. On the other hand, the 3D Bloggie HD will have lots of appeal for those shooters who just want to quickly and easily capture great 3D footage without all the fuss and bulk that usually accompanies prosumer and professional level cameras.

If grab-it-and-go 3D appeals to you then look no further than Sony’s 3D Bloggie HD.