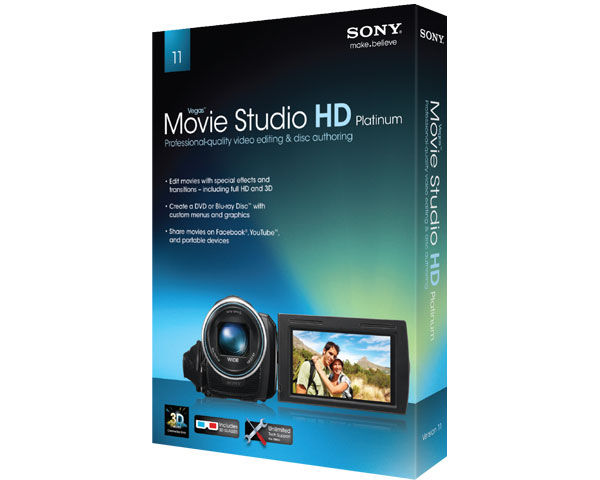 This is the year for 3D and Sony Creative Software has stepped up with its new version of Sony Vegas Movie Studio HD Platinum 11, with 3D import from MVC 3D video and 3DMPO still image formats, editing and previewing on 3D monitors, or on standard monitors with red/cyan glasses, and sharing on YouTube 3D or Blu-ray 3D disc. This release adds improved GPU-accelerated AVC rendering, support for more progressive HD project formats, title and text animations and effects, and other workflow improvements.

Sony has continued its legacy of providing a family of consumer applications instead of a single integrated tool, with DVD Architect Studio 5.0 for DVD and now Blu-ray authoring included with Movie Studio HD Platinum, plus Sound Forge Audio Studio for audio editing and production ($65), and ACID Music Studio for music creation and mixing ($65).

Sony has a legacy of providing in-depth control over editing options, albeit with a sometimes idiosyncratic approach. The Movie Studio interface can seem cluttered, with lots of icons and controls for direct access to controls, instead of “consumerizing” the look by burying them in context menus. And the menus themselves have a profusion of interesting options (such as “Quantize to Frames” and “Make Compositing Child”).

This approach even highlights its flexible and pluggable design even for basic operations. For example, you don’t just process AVC video, you use the Sony AVC/MVC plug-in; you don’t use a text animator, you use the Titles and Text Plug-in; and applied effects are not just in a list, they are a Plug-In Chain.

As a result, there’s a learning curve to get started (e.g., adding just one transition requires comprehending the Video Effect FX plug-in chain architecture). But then you can keep refining with even greater control, with 10 video and 10 audio tracks; over 400 transitions, filters, effects, and titles; and keyframeable effects.

Version 11 also adds event-level control over audio effects, plus a new Titles & Text plug-in for creating static and animated text, along with the Credit Roll plug-in for scrolling credits – although these are buried under the View / Media Generators menus. 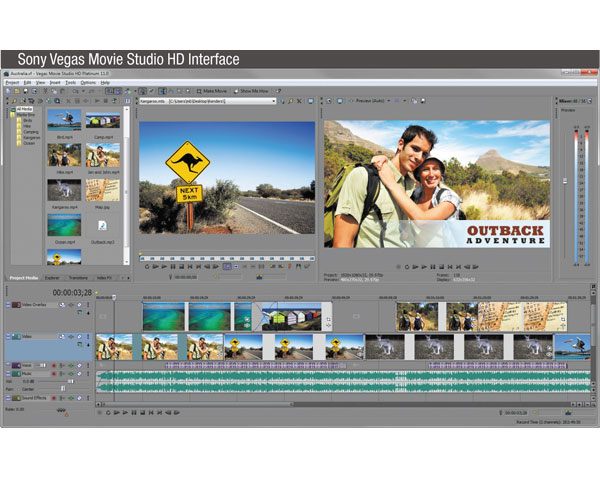 This same depth carries into the new 3D editing capability: You can import and edit your 3D content into your production just like any other media, or set up your project to match a specified media file. Then set the 3D viewing mode for your display type, including 3D displays (side-by-side, interlaced, with left/right swap) or on a standard display with anaglyphic (cyan/green) glasses.

In the Movie Studio style, there are also a plethora of options to precisely align the 3D views and depth with the “Sony Sterographic 3D Adjust” effect – including setting the horizontal and vertical offset, zoom, keystone, rotation, flip horizontal/vertical, and cropping. You also can create 3D by pairing material shot with two different cameras. You then share your production online via YouTube3D, or burn to Blu-ray disc to view on a 3D TV.

The evolution of the consumer video editing market has resulted in a diverse selection of powerful tools like Vegas Movie Studio that go well beyond HD editing to offer rather professional features for consumer use. At the same time, Movie Studio helps casual users get started with Show Me How tutorials, wizards for easy sharing online, and extensive collections of templates, themes, and soundtracks.

Traditionally, consumer video products walked a delicate line between being simple and welcoming to novice uses, and providing enough depth to satisfy more sophisticated enthusiasts. More recently, the continued profusion of camera and video formats, combined with the addition of sophisticated professional features, has caused these products to assume a more engaged and committed user that wants to work with multi-track timelines – well beyond simple drive-by trimming of camera phone clips for posting on YouTube.

As a result, each of these tools has taken a different approach to rewarding users who are willing to invest the effort to take advantage of their capabilities. For example, Adobe Premiere Elements ($100) focuses more on automated analysis of clips and integration with Photoshop Elements, for people who want to get organized and work with a growing media collection. And Avid Studio ($170) is designed for more experienced consumers, who want to break through the limitations of consumer tools and work on larger projects, especially with an unlimited timeline.

Sony takes a rather different approach with its Studio products, which are built on a legacy of more hands-on editing. The focus with Movie Studio is not so much on organizing and combining clips, it’s on refining a production through precise control of the assembly and animation of your clips.

This is a tool for people who just want to get down to editing, with the kind of precise control needed to create productions you envision.