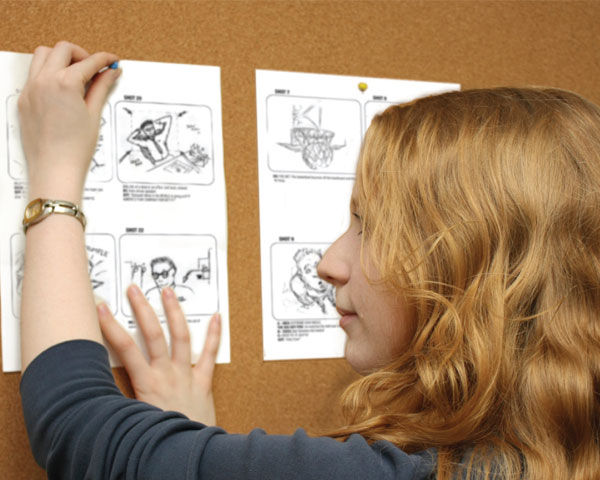 Getting your story's vision from your brain to the table is hard, so let's look at what storyboarding is, along with some useful movie storyboard examples and tricks from the pros.

What is Storyboarding, and Why is it Useful?

On big video productions there may be as many as a hundred people on set at once, which means that every second a director spends stroking his chin and wondering about where the camera ought to be placed he's paying a hundred people to stand around and watch him. This is something that motivates a film's backers to make sure that there are no moments during shooting when everybody who's getting paid to work isn't working. One of the ways that directors, producers, art designers, and directors of photography make sure that everything is worked out before the cast and crew actually get to the set and minimize standing-around time is to use storyboards.

Watch: How to Organize a Shoot

Storyboards are typically a sort of comic book style illustration of the entire movie, or sometimes just difficult scenes in a movie, including camera angles and the motion of actors through the sets. Lots of storyboard excerpts have made their way onto the Internet; Google can help you track down many of them. Spectacularly popular movies, such as Star Wars or Kurosawa's war epic Ran, may have their storyboards published as books. Many other movies will show some of the storyboards in the special features section of the DVD – often with side-by-side comparisons of the original storyboards and the final film. Lots of storyboarding tips and storyboard examples can be seen on line on websites like YouTube. There's also a plethora of writing about storyboarding in this history of Hollywood. One very famous champion of the storyboard is Alfred Hitchcock. Rita Riggs, the costume designer for Psycho, discusses the director's affectation for extensive storyboarding in Stephen Rebello's book, Alfred Hitchcock and the Making of Psycho, saying: "The real difference working with Hitchcock and his circle was that you had an entire, cohesive picture laid out before you on storyboards. He truly used storyboards to convey his ideas and desires to all his different craftsmen. You knew every angle in the picture, so there was not a lot of time wasted talking an item to death. We also didn't have to waste time worrying about things like shoes, for instance, because we knew he wasn't going to show them in the shot."

Other directors, such as the award-winning filmmaker and documentarian Werner Herzog, find storyboards constraining and an impediment to the free flow of creativity – Herzog is quoted as saying "storyboards remain the instruments of cowards who do not trust in their own imagination and who are slaves of a matrix…"

Whatever your ultimate opinion of their usefulness, they are part of the cinematic vocabulary. 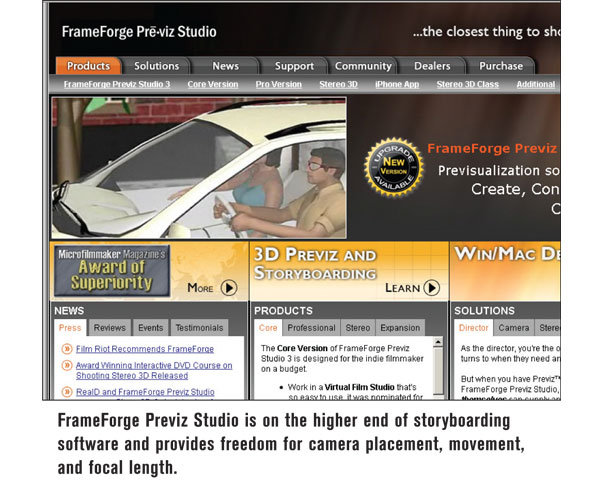 Not all storyboards are meticulously drawn cartoon frames worthy of publication, some are a lot less involved and others can be much more involved. Today we'll look at a few common varieties.

Narrative Only
Narrative only storyboards are perfect for people who can't draw, don't have the money to hire a storyboard artist, or who aren't risking a whole lot in having people stand around their set for a few minutes while they figure out where they want the camera – which is probably most of us. It's not uncommon that the director, the videographer and the talent live far enough apart that physical meetings aren't practical and who come together on a weekend to bang out a final product. You might not need a great deal of detail. You might just send out a narrative storyboard like this:

Basic Panels
Basic Panels are a step up from narrative only storyboards, as well as a brief description, they'll have a very basic drawing, this can help camera operators and lighting designers know in advance exactly what the director is looking for. These can be in the "slightly above stick-figure" range.

Scene Cards
Scene cards are like basic panels, but more elaborate – the drawing usually takes up one entire side of the card with a description written on the back. If you're looking on eBay for scene cards, you'll find something completely different. In the early days of cinema, a "scene card" usually referred to a still from a completed film with a description or caption on the back or underneath – a lot like the collectible bubble gum trading cards popular in the 60s, 70s, and 80s. Collectors' scene cards became superfluous when it became easy to own an actual copy of the movie, this seems a little sad. 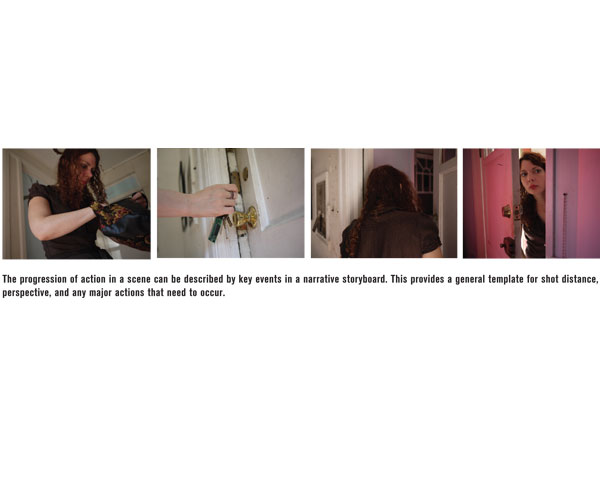 Animatic Storyboard
To make an animatic storyboard you can scan sketches, use photographs you've taken, or even tear images out of magazines, put them into your favorite video editing software and add narration or music. The idea of an animatic storyboard is often just to get the idea or feel of your project across.

Many of us tend to think of ourselves as "not the sort of people who will ever have the need or the opportunity to approach financial backers" and because of this don't think too deeply about things like storyboards. One great example of a successful use of storyboarding was Christopher Salmon's animatic storyboard for an adaptation of Neil Gaiman's short story The Price. Salmon drew still images from an animation he wanted to produce and uploaded it to kickstarter.com – a crowd source funding website. Enchanted by his narration and still images, 2001 different backers around the world invested almost $162,000 in his venture spurred along by the author who also got involved after seeing the storyboards.

3D pre-visualization
If you're trying to prize millions out of potential backers or explain a complicated escape sequence involving Bruce Willis, 40 explosions, and a hedge maze, you may want to create a 3D walkthrough of your scene or movie before you start working on it. Using storyboard software like FrameForge's Previz Studio 3 you can show virtual camera angles and scaled sets to your backers before they plunk down their cash. The 3D will allow you to see the relationships between your actors, your scenery and your camera. This can be an enormous help if you want to see how adding additional lights to a scene may change the shadows or light characters moving from one place to another.

There's lots of storyboard software, along the gamut from freeware to relatively expensive software that can help you put your story together – freeware like Atomic Learning's StoryBoard Pro to 6sys's Springboard Storyboard which retails for about $40, to PowerProduction Software's StoryBoard Quick which starts at $300 and finally to powerful tools like FrameForge's Previz Studio who's full featured software ranges between $400 and $900 and will allow you to add things like multiple light sources and even output in 3D. But remember, video production isn't about equipment as much as it is good stories — Hitchcock did it on index cards.

While it may seem at first glance that only big Hollywood productions can benefit from storyboarding, it's often true that much smaller projects can run much more smoothly from pre-planning camera placement and framing. Frequently, in a world connected by the Internet; directors, camera operators and talent separated by long physical distances can still work together. The more planning you do ahead of time, the easier things will be in the very limited amount of time you may have together.

Today's directors and creatives may think that they have no interaction with producers, in the traditional sense of the word, but crowd sourcing has given everyone with an Internet connection the opportunity to raise money to make a video. The better prepared you are going in, the more money you're likely to raise – this was true of Orson Welles, and it's true now.

For more information, there are a number of books about making storyboards, which you can find on Amazon.com. There are also a number of collections of storyboard art such as The Unseen Art of Hollywood: A Retrospective of Film Storyboards compiled by storyboard artist Trever Goring who has storyboarded films such as The Cell, The Italian Job, and The Lion, The Witch, and the Wardrobe.

Next time you find yourself planning for a large, complex production, consider adding storyboards to see if they can improve your workflow. And when you're flipping through the special features section of the next DVD you rent, be sure to check to see if there are examples.