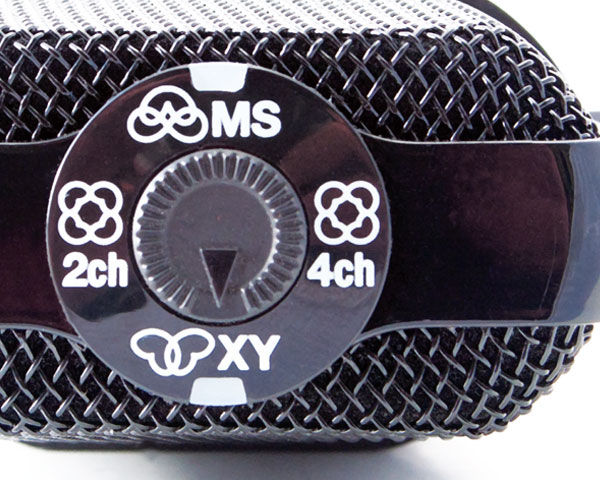 It’s the curse of the video producer: how to record good, clean audio. In the past, that meant your camera needed microphone and headphone jacks. In a perfect world, those mic jacks would have professional connectors and supply phantom power for condenser mics too. It was possible, but these requirements always seemed to carry a high price tag. More affordable and readily available equipment rarely included these items. The explosion of DSLRs and pocket video cameras – along with their limited audio amenities – sealed the deal. We needed an affordable, portable audio recorder and the audio products manufacturers responded in spades. 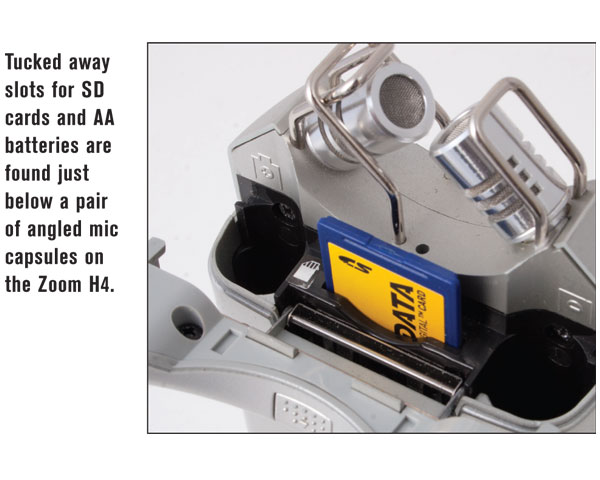 Today, there are many flavors of portable audio production recorders, from several manufacturers. Sony, Tascam and Zoom are the major players but you’ll also find portable audio recorders from Alesis, Edirol and many others. As you can imagine, there are many options out there, but most of them share a core set of features that any video creator will love. First – and obviously – they’re portable. That means no computer tethers, no power cords and, on most models, you don’t even need extra mics – they’re already built in.

In the field, power is usually supplied by off-the-shelf AA or AAA batteries. These will power the recorder for hours and, if you run dry, replacements are available just about everywhere. Other models include a rechargeable battery pack which, like your phone or portable media player, means you’ll have to keep it charged all the time. In addition, most of these portable audio production studios allow the use of aftermarket rechargeable cells and some even charge them in the recorder when you plug it in. Nickel Metal Hydride (NiMH) batteries usually work well in this type of audio device.

Portable audio recorders store their data on flash memory cards – also readily available at any store that sells electronics. The recorder will determine the type of card needed and it could be anything from a microSD card to CompactFlash. Some models even include a starter card so you can fire it up right out of the box. Depending on the type of camera you use, you may already have spare cards floating around. This is a great way to re-purpose a memory card you may have outgrown for video or stills use. 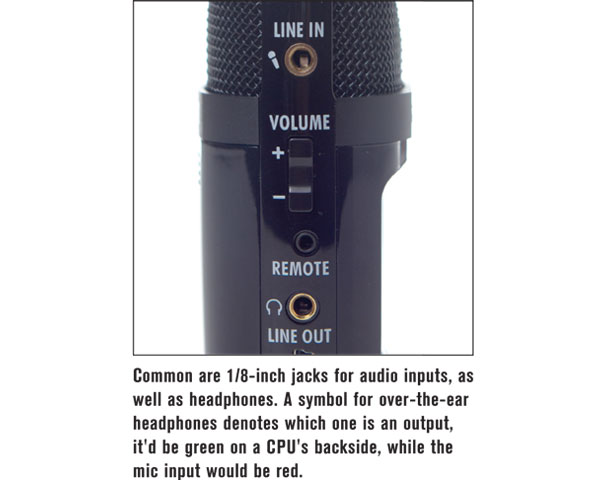 The final similarities for portable recorders are inputs and outputs. Theses devices provide a simple way to plug in microphones and headphones to maximize your recording and monitoring. The jacks are often 1/8-inch (or 3.5mm) versions – similar to consumer camcorders – but they do the job. In fact, even the simplest $100 audio recorder sounds noticeably better than the audio recorded from all but the most expensive cameras. The addition of a headphone jack offers audio monitoring, which is sorely missing on most DSLRs. 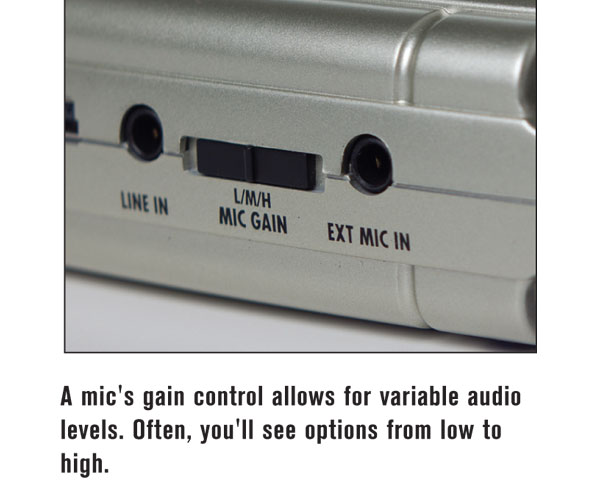 When you’re researching portable audio recorders, you’ll find a variety of extra features designed to make your audio life easier. One of the more popular features are XLR microphone inputs with phantom power. This opens up the entire spectrum of professional microphones, from shotguns to studio condensers, even pro wireless equipment. It also makes it easier to plug into audio sound equipment like mixers and sound systems.

One particular model – Zoom’s H2 (and newer H2n) offers the unique ability to record four channel surround sound. Using the four built-in mics, you can gather natural sound in the field and blend it with dialog in post production to create a very respectable surround sound track. Some other audio recorders let you record two channels from the mic inputs and two channels with the built-in mics. You’ll also find some models offer audio monitor speakers built into the recorder for quick checks without headphones.

Finally, one audio feature that plagues recordists in standard camcorders is automatic gain control or AGC. While these recorders provide AGC to reign in variable audio levels, most offer the option to disable it completely, giving you full control over audio recording volume. 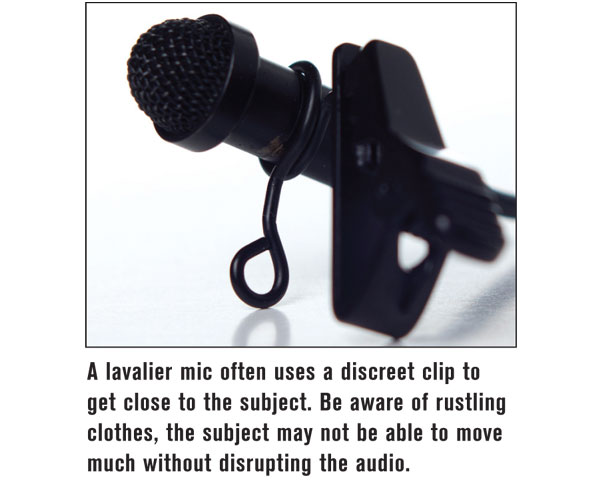 Obviously, a portable audio recorder can capture audio for your video production. But there are many other uses too valuable to ignore. For instance, have you ever wished for a professional wireless rig? A nice one starts around $500. Ouch. But what if you grabbed one of the $100-range recorders and added a simple wired lapel mic like the Audio-Technica PRO 35s? For around $360 you’d have a completely portable audio tool that can go in a pocket or cell phone case, just like a wireless lav mic. In fact, you could deploy two or three of these setups for the cost of one professional wireless microphone. You’ll have to sync them up in post, but you were going to do that anyway, right?

Portable audio recorders usually include a stereo pair of microphones built into the device. Many are excellent, some less so, but they’re always there, so use them. Plant an audio recorder on a tripod or light stand and get the mics closer to the sound. No cables, no extra mics or stands and no extra audio mixer. Just a small visual footprint. This is a perfect setup for recording school music programs, recitals and plays.

You can also use your portable audio recorder as a mobile audio production studio for recording voice overs. Add a windscreen and a pair of headphones and you can record professional sounding dialog pretty much anywhere. The mics are stereo, so keep your head movements to a minimum, but this is a great portable solution. Now you can record raw audio in your car, a closet or any quiet place and edit later in a more controlled environment. The same goes for sound effects. Add a shotgun mic for more directional pickup or just use the built-in mics. Either way, it’s a very mobile audio gathering solution.

Virtually all portable audio recorders include a USB port for transferring files to your computer. But there are several models that also let you use the tethered recorder as an audio interface or even a podcast microphone. This can be a useful option if you’re working with a stock computer or laptop that has a mediocre audio section. By selecting the recorder as your soundcard, you can use the built-in mics, external mics or even a line level source and record directly into your favorite audio production software. As a podcast mic, these recorders work as well as most of the dedicated microphones. Why buy two devices if you don’t need to? 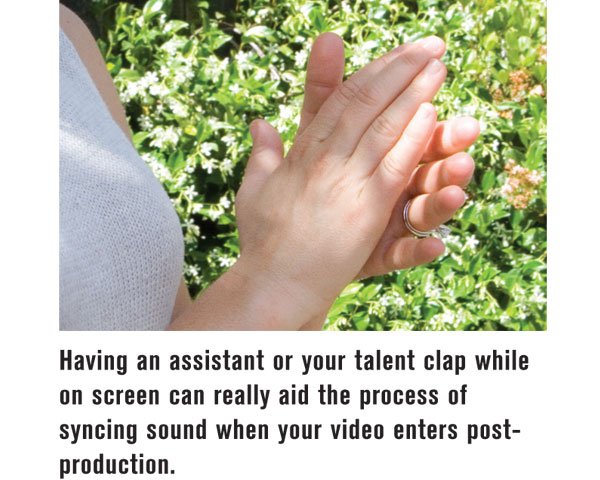 Using a separate recorder complicates the post process some, but after you’ve done it a few times, it gets easier. Plus, the added audio quality from your portable recorder makes the extra steps worthwhile.

We’ve covered sync sound in more detail in the December 2011 issue of Videomaker, but here is the short version. Because your camera and audio recorder are now independent of each other, you have to provide some way to synchronize them back in the edit suite. Once you’ve started all the audio and video recorders, create a sharp, loud sound that all mics can hear. This could be a clapper board, hand clap or even a balloon pop or cap gun – whatever you have available. This will create a spike in the audio waveform that should be easy to see once you have all the files in your editor. Zoom in on the spike from the camera audio and slide your audio recording(s) until they line up with it. Sound synced. Alternatively, there are software solutions that analyze all the audio files and automatically sync them with your video. This is a good option if you have lots of audio to sync. Otherwise, the basic approach works just as well.

Starting around $100, a portable audio recorder is the perfect addition to any video shooter’s setup. Include some batteries, a memory card, headphones and maybe a couple of audio adapters and you have a fully mobile audio recording solution. It will work with gear you already own and items you’ll purchase in the future. In fact, given their multiple uses, a portable audio recorder might be more cost effective than some of the equipment you’ve been drooling over. To top it off, you can use it with anything from a pocket video camera to a full DSLR with equal results. The hardest part may be picking a model from all the available choices.

Get Off The Camera

Portable audio recorders are the darling of the independent film world. With a small budget and even smaller crew, a professional-sounding recorder can level more of the playing field. Unfortunately, many indie producers strap their audio recorder to the top of the camera – creating something similar to the distant camcorder sound we’ve grown to hate over the years. All the shock-mounts and windscreens in the world won’t improve audio that’s recorded from 20 feet away. To get the most power from your portable audio recorder, either plug in an external shotgun mic or get the recorder closer to the sound you want to record. Better yet, do both. Designate a crew member for audio duty and equip them with a recorder, headphones, a shotgun mic and a boom pole. One memory card and one set of batteries should last all day and you’ll have audio that truly competes with Big Hollywood.