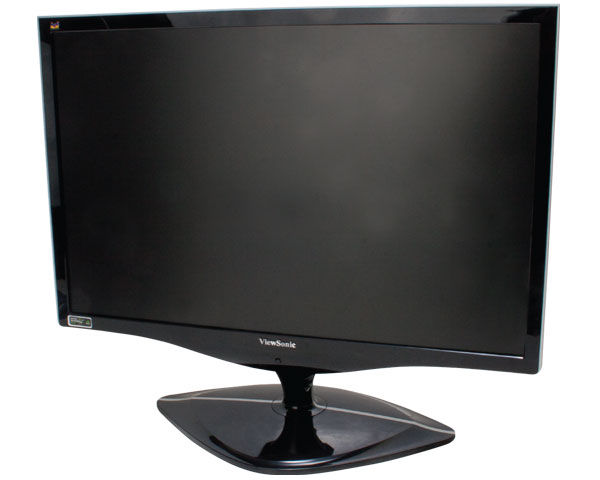 If you’re after some hard hitting 3D action then ViewSonic’s VX2268wm FuHzion 3D display is certainly worth a look. Harnessing the third dimension is definitely this monitor’s forte but is average at best in the non-3D realm.

It’s non-3D performance notwithstanding, the VX2268wm does look impressive coming out of the box. It has an attractive, curvy design, all dressed in black with a silver trim around three of its four sides. The support joining the display to the base is also curvy but far too slender to adequately support the weight of the display, resulting in quite a bit of wobble when touched.

Along the back are the usual power cord, audio, DVI-D Dual Link and VGA connectors. HDMI and USB connections are noticeably lacking. A cable management loop is present to keep things tidy. The speakers are built in to each lower rear corner and at 2W of SRS premium capable sound they do a pretty decent job. For maximum immersion into your gaming experience, though, you’ll probably want to use a good set of headphones. The power button is backlit with blue light and conveniently placed front and center along the lower front of the display. Four onscreen display buttons, however, are located along the bottom of the display pointing straight downward at the desktop. A bit awkward, users will have to memorize their position and function over time. Tilting is the only ergonomic adjustment available.

Though pretty, this monitor’s 2D performance is no more outstanding than the standard display currently setting next to it. This is partly due to the TN-panels which offer the faster response times demanded by gamers but lack the visual quality of other types of LCD panels. While the VX2268wm lacks features one would expect at this price range, an ambient light sensor or multiple image presets, it does deliver rapid response, good contrast and accurate color reproduction.

What makes the VX2268wm worthwhile, ultimately, is its 120Hz refresh rate. When teamed up with a compatible graphics card and the NVIDIA 3D Vision wireless glasses kit this display becomes a car racing, alien attacking, zombie beheading monster. So be prepared, understand that owning this monitor alone won’t give you the full immersion 3D adventure you’ve always dreamt of. You’ll also need an NVIDIA GeForce 8800GT or higher graphics card (see NVIDIA’s website for specific compatible cards), the glasses and the Windows Vista, or newer, operating system.

Make sure that your computer is beefy enough to handle the graphics card as its job is to render not one but two slightly offset images. The glasses use active shutter technology to present to each eye its own image on alternating frames (for example one eye sees the even numbered frames and the other eye sees the slightly offset odd numbered frames.) Each eye perceives the image in full resolution because it is receiving a full 60Hz signal (hence the need for a 120Hz capable display.) Our brains put the two separate images together into one and thereby create the 3D effect.

When all these components come together pure magic happens. It is then that the monitor’s true worth becomes evident. The depth of field is amazing (and adjustable via a thumbwheel on the 3D Vision IR emitter) and one quickly becomes lost in the moment with tires screeching, bullets flying and blood splattering.

If explosive 3D magic is what you desire then look no further than the ViewSonic VX2268wm.