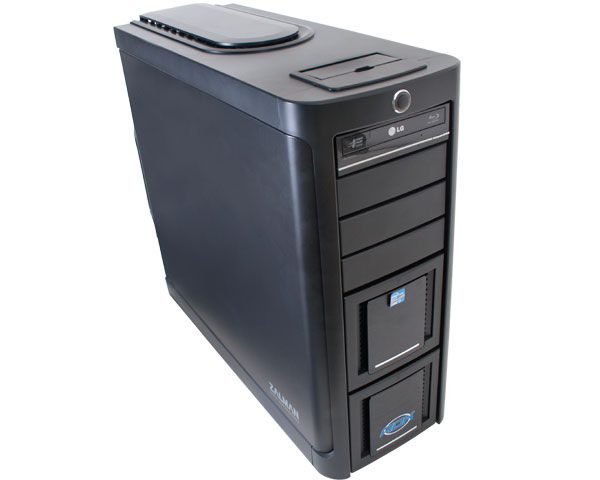 The first thing you think when looking at the ADK I7-DVC is “Whoa this is a beast!” The case alone would lead one to believe that it is a fast expensive piece of equipment. The computer comes complete with driver CDs, backup software, restore CDs, manuals, extra power connectors, extra screws and even a tube of thermal paste. Many big-box companies don’t even come with restore CDs anymore just a restore partition. This computer is like having a custom computer made just for you complete with all the accessories.

What’s It Made Of? 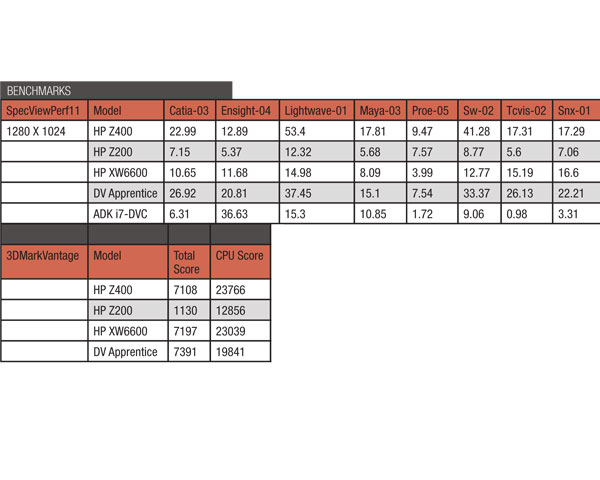 The case is large and well ventilated with four fans. On top of the case is a nice flip-open top with USB, FireWire 400 and audio ports. The case has four slots for holding DVD-ROM devices and eight hard drive bays. Six of the hard drive bays have removable trays with a flip-down door in front of the computer. Unfortunately, these are not hot-swappable bays, but nice nonetheless. The cables are neatly woven through the backside of the case making it very neat and tidy. The computer has a 700-watt CoolerMaster Silent Pro power supply with a large 135mm fan. Despite all the fans inside this computer, it is rather quiet. The motherboard has a nice set of onboard features: RAID (Redundant Array of Independent Disks), SLI (Scalable Link Interface), 8 Channel Audio, Gigabit LAN, eight USB, eSATA, FireWire 400 and two USB 3.0 ports. The motherboard also has a back-to-bios button on the back of the case, useful if you overclock the CPU too much and can’t get the computer to boot. For those who like to overclock, the large Noctua heatsink will not disappoint, with dual 140mm fans and a huge heatsink it will handle a heavy load. All four of the memory slots of the motherboard are filled, giving it 16GB of total memory, more than enough for your video editing needs. For storage the computer has four 1TB drives in two RAID 0s, creating a source and render drive. For the OS the computer has a top-of-the-line 240GB Mushkin SSD with a max speed of 268 MB/s. The video card is a high performing Zotac NVIDIA GeForce GTX 570 with 1280 MB of video RAM. Though this card is primarily for gaming, it works fine for video editing. All the parts in this computer are name brand. With name brand you can rest easier in knowing that mid-project a power supply or hard drive isn’t going to fail, bringing your work to a standstill. If there is an incident the computer can be returned to the manufacturer under the 2-year parts warranty for a hassle free fix.

The first check was the hard drive performance speed using HD Tune. In short this computer’s hard drives are as fast! The primary OS hard drive had an average read of 257 MB/s and an access time of 0.094ms. This SSD can find and open a file faster than a traditional hard drive. The computer also comes with four 1TB hard drives in two RAID 0s for a source and render hard drive setup. The average write was 207 MB/s, the average read was 190 MB/s, and the access time was 11.9ms. The read performance was less than expected, but when rendering videos the write speed is more important. A standard hard drive will have around 100 Mb/s Read/Write speeds. As seen in the tests this computer greatly outperforms the standard. It is worth noting, however, that since these hard drives are in RAID 0, if one of them fails all your data is lost. For optimal project safety it is better to use RAID 1.

The Windows Experience Index base score was 7.7, one of the highest scores we’ve seen. Usually, the hard drive or graphics card will cause a bottleneck, but this is not the case with this computer. The highest possible score in the Windows Experience Index is 7.9, which the graphics card was able to max out. If computers get much faster, Windows will have to expand its score range.

Since this computer is not equipped with a workstation-class video card, it suffered greatly in the SPECviewperf 11 benchmarks. It is worth noting, however, that unless you plan on using a 3D rendering program like Lightwave or Maya this isn’t a very big concern. If you are, ADK gives you the option of selecting an NVIDIA Quadro graphics card to be built into your computer, but this comes at a higher price.

This computer is best set up for editing video or playing video games. If you also want to render 3D models, it may not be the best fit for you. ADK gives the option for adding a video-editing card but this will also increase the cost of the computer. This computer has some of the latest hardware in it making it a bit pricey for a mid-range editing computer. The computer lacks a memory card reader, which allows you to just swap the card out of your camera instead of having to hook up the USB cord. On the other hand, the many fast hard drives in this computer are great for editing video since external drives generally won’t be needed. In short this computer is fast, has a great setup for video editing and is great for gaming. If this computer is within your budget and you enjoy playing a game now and again it’s worth a look.

The ADK I7-DVC is fast, has a great setup for video editing and is great for gaming.