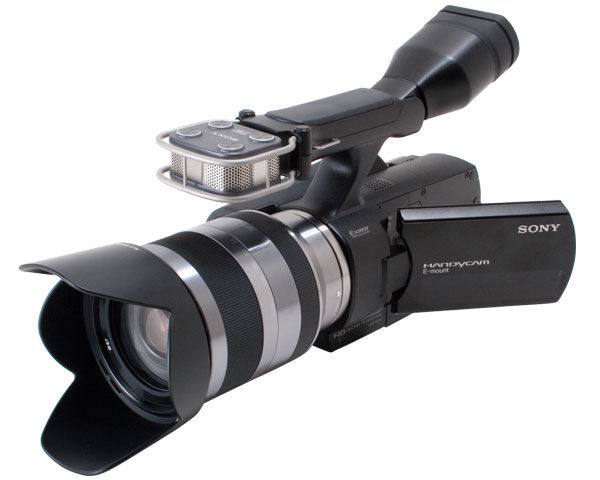 Something akin to a blending of video camcorder with DSLR technologies, the entrance of the “world’s first consumer interchangeable lens HD camcorder” into the marketplace is a welcome addition to the many options facing today’s video producer.

Soon after un-boxing the eagerly awaited NEX-VG10 we began to experience a number of “wowee” moments as well as a few not so cool moments. In thinking about the pros and cons on this camcorder, we realized the cons were born primarily of our perception of what this camera could be rather than what it actually is.

We think it is important, therefore, before moving on to the details, to point out that we believe this camera could quite easily be unfairly judged. The reason, simply stated, is that it is so close to being much more than what it actually is. The perspective we need to understand is, what the manufacturer, in this case Sony, intends it to be – which is a consumer level camcorder. 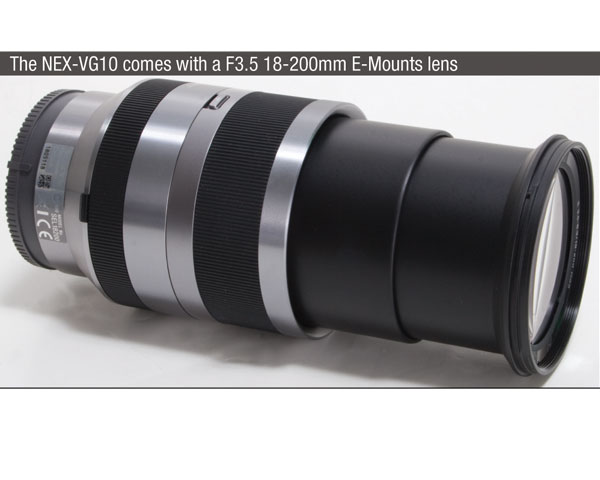 Yes that’s a word, I just made it up. A great way to optimize one’s optical resources is with the ability to use different lenses. That is exactly what Sony has done with the NEX-VG10. Never before has a consumer-class camcorder user enjoyed the versatility inherent in having the ability to swap out your standard lens for a macro, fisheye or whatever happens to suit your creative purposes.

Included with the unit is an 18-200mm E-mount lens with an 11X optical zoom. It uses a silent auto-focus system, (do not despair prosumers, manual focus is an option too), and optical image stabilization using Optical Steadyshot technology. E-mount lenses are lighter, smaller and optimized for video use.

The manual zoom ring on this lens offers up a fair amount of resistance when extending or retracting the lens. We found that because the camera is very light weight, using the manual zoom resulted in the wrist rotating to one side or the other – not a desirable characteristic when shooting and zooming hand-held. Proper shooting technique dictates that zooming while shooting should be kept to a minimum but when it is necessary, it is advisable to use a tripod. If hand-held shooting is required then be sure to utilize good hand-held techniques for maximum support and minimum wrist rotation. A power zoom would alleviate this tendency and would be a great feature to include in a future iteration of this camera. We should also point out that Hybrid DSLRs made for shooting video and photos that have interchangeable lenses similar to the NEX-VG10 do not have a power zoom as well.

Optional E-mount lenses include an 18-55mm zoom lens and a 16mm wide-angle lens. Additionally, a camera mount adapter may be purchased which allows the use of a wide variety of A-mount lenses, currently found on Sony DSLR cameras. 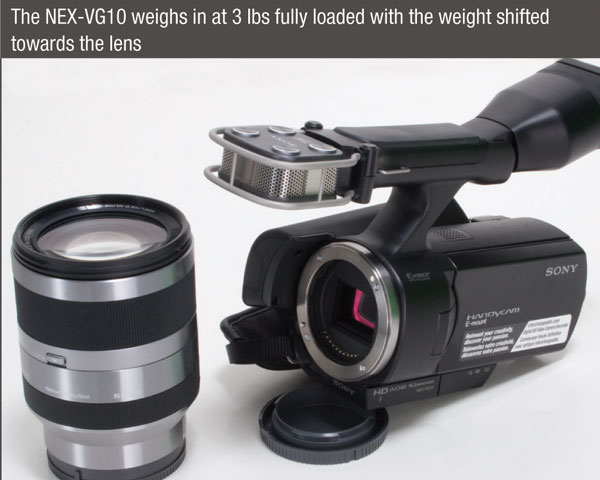 Full 1920×1080 HD video is captured at 30p (29.97p) and recorded in AVCHD 60i (59.94i) at up to 24Mbps. The resulting footage is nothing short of stunning. The visual quality and color reproduction is excellent and to achieve such high quality, the NEX-VG10 utilizes an Exmor APS HD CMOS sensor that measures 23.4 x 15.6mm, approximately 19.5 times larger than those used in conventional camcorders.

A large sensor such as this allows a great deal more light to enter, resulting in a beautifully shallow depth of field. A shallow depth of field allows you to de-emphasize, or blur, certain portions of the image in order to place greater emphasis on that portion which remains in sharp focus. This ability contributes greatly to achieving that film-like quality in our video productions that so many of us are looking for. This feature alone is a big win, particularly for a consumer class camera. 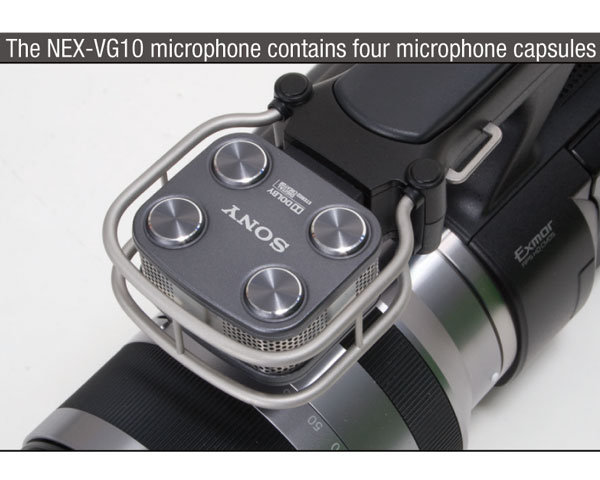 Visually, the NEX-VG10s microphone is a thing of beauty, reminding me of the flying bridge on some great starship in the old Star Trek series. It uses a Quad Capsule Spatial Array system and advanced processing algorithms to combine the individual signals. The result is very clear stereo audio. Care must be taken however as the mic is sensitive enough to pick up sound from handling the camera.

Remembering that this is a consumer class camcorder, the quality of audio produced with this microphone is very good. From a prosumer standpoint however it is almost never a good idea to go with a camera’s built-in mic if you want truly professional results. The NEX-VG10 allows for this option by providing a mini 3.5mm stereo microphone jack below its dual accessory shoes (Alpha Hot Shoe/Universal Cold Shoe.) A headphone jack also resides nearby for monitoring sound levels.

Manual controls are reached through a user friendly, intuitive set of buttons used in concert with a rotary control dial located on the Operation Panel behind the LCD display. There are buttons for the menu, display (you’ll find a histogram displayed here as well), playback, white balance, gain, focus, exposure compensation and more. 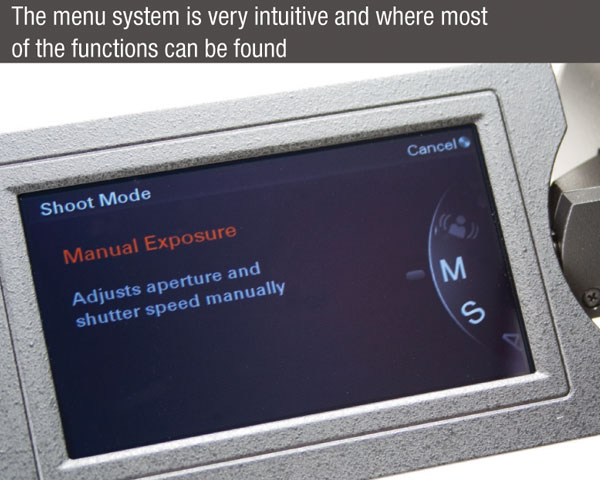 The rotary control dial occupies the center of the panel. When depressed it brings up the Shoot Mode display. A virtual dial appears on the right of the screen with a description of each setting showing on the left. Rotating the physical dial cycles the virtual display through options such as Shutter Priority, Aperture Priority, Hand-Held Twilight, Anti Motion Blur, Manual Exposure and more.

The rotary dial also selects among options made available by the various buttons such as White Balance or Focus. For example, when the Focus button is pushed its virtual dial appears on the display. Use the physical dial to locate the desired setting and depress it to select. For the more tactile oriented users among us there is also a focus ring located on the lens.

Ports are included for USB, HDMI, a memory card and DC power. One disappointment we’ve found with other cameras in this class are the flimsy port cover supports. They feel very thin and prone to being torn off. The NEX-VG10 employs thicker material in the port covers giving them a stronger, more permanent feel.

Compatible memory cards are the Memory Stick PRO Duo (Mark 2) and PRO-HG Duo media (up to 32GB) as well as SD, SDHC and SDXC memory cards (Class 4 or more – up to 64GB.)

You won’t be plugging in your XLR mics without an adapter, or enjoying a bounty of buttons with this one, but remember, it is a consumer, not prosumer, camera. With that in mind, we are very pleased overall, with Sony’s new interchangeable lens, consumer-class camcorder.

It would be easy to deride the product by saying that it should have this or that feature. But in order to evaluate it fairly we must realize that it is not a prosumer or professional level piece of equipment that forgot to have certain features included, but rather a consumer level camcorder that has included some truly excellent features such as interchangeable lenses.

The level of creativity achievable with a camcorder like this is endless. Coupled with a wonderfully shallow depth of field, beautiful color, great sound reproduction and user friendly controls the NEX-VG10 is absolutely worth considering.

And, oh yeah, it shoots great 14 megapixel still photos too.

If you’re looking for near-prosumer performance on a sub-prosumer budget then you’ll want to have a serious look at the Sony NEX-VG10.