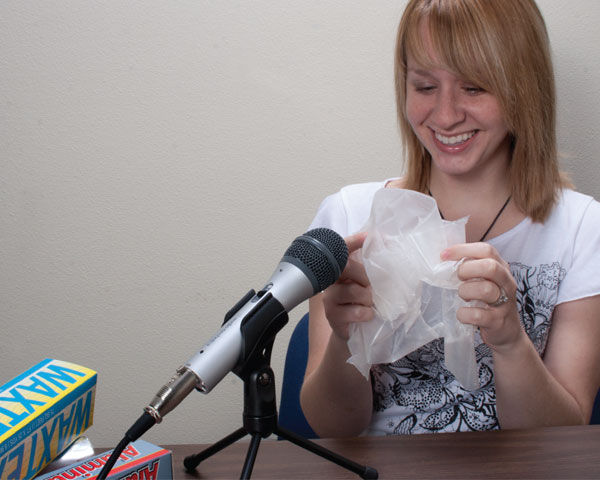 Sometimes a source making one sound can be perceived as something else entirely, if you don’t know what it is. Things are not always as they sound. What do you hear when you see a huge knife slice through a big, wet head of lettuce? What about when you see somebody’s finger circling around the edge of a goblet or glass? What sound comes to mind when you see hands squeezing a balloon until it pops?

Think outside the sound effects description on your CD library. Close your eyes and listen. Use your imagination. You might hear something that sounds like cloth ripping apart, an out-of-this-world hovering entity or gunshots. These are the alternate sounds you can apply to your video productions, add to your sound effects library or personal collection of audio clips you create to use in a wide range of productions.

As you continue to read, I encourage you to think outside the source. Close your eyes and listen and you’ll enjoy not only experimenting with what sounds you can create from items in your home or apartment, but discover sound effects possibilities that are otherworldly all over your physical world. Just remember, sounds don’t always have to be what the source might dictate. 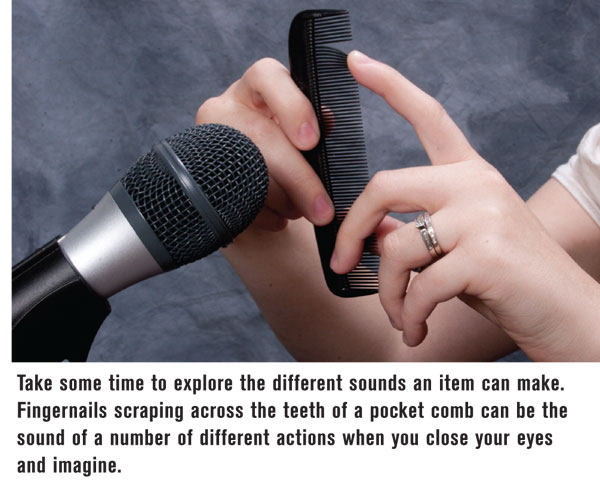 Take a few hours to assess your household items, even the equipment you have in your editing room. Start looking at what you have that generates or can be made to generate sounds and what those sounds might otherwise resemble. Fingernails scraping across the teeth of a pocket comb can sound like a zipper, something ripping or, well, fingernails scraping across the teeth of a comb. That spinning, whooshing sound from your CD/DVD burner – does it have to represent only that sound or could it be something else. A flying saucer spinning up to take off? Some kind of suction cup sound effect?

In preparation for this column I went around picking out all kinds of silly things to make a sound from – keys, coins in a plastic container, pills in a plastic pill bottle, a faucet dripping into a crab boiler, bank ATM receipts flapping… you get the idea. I even snorted a few times and puffed out my cheeks and popped out from my sealed lips with a finger. I tried out these and more simply using my Zoom H2 recorder with the screen and mic stand adaptor attached.

I was surprised at what I heard upon transferring these sound bytes to my audio editor. Though I tried to keep my focus on some realistic alternative sounds they might represent, I have to admit it was difficult to get my mind away from hearing keys rattle, paper flap or cheeks pop. The experiment, however, was ear-opening overall. None of the sounds generated had to be or could only be perceived as their source dictates.

This was achieved simply with stuff around the house or hidden in my cupboards. Imagine what could be acquired from everyday sources located on the rest of the planet. Or, if I took the time to organize a day for creating unique and unusual sound effects. 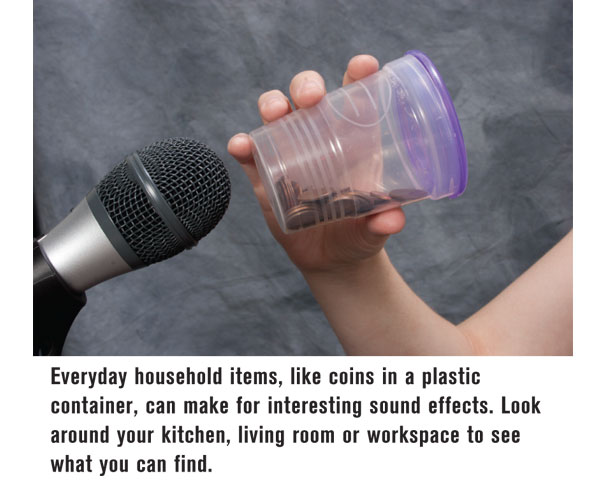 Let’s pay another visit to the kitchen – that blender, the toaster, your coffee maker, the utensil drawer, refrigerator, oven and cabinet doors opening, closing, being slammed. What does thumping a wine goblet sound like other than thumping a wine goblet? What can scraping a glass over a ceramic tile counter represent other than the sound of that action? Does toast popping up from the toaster have to sound like what it is? Every room in your home is rich in sources for generating normal, odd, unusual and ethereal sound effects. What would it sound like if, on a dry day, you scraped across the carpet or rubbed your pet cat, or rubbed your hands over your wool or silk shirt or dress? If you safely had your mic placed nearby as you touched something that grounded and set off that static charge? Could you even capture the sound? Did you get the unanticipated “yelp” you made when you got shocked? What could that be used for? 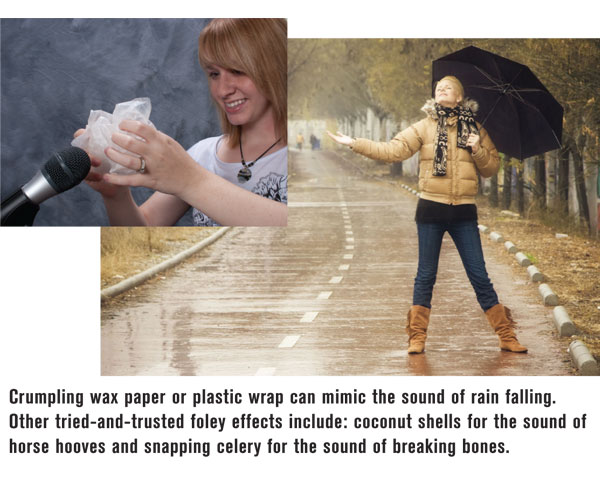 While the usual items used for tried-and-trusted Foley effects hold forth – coconut shells on sand in a box to simulate horse hooves, rattling a sheet of tin for thunder, crumpling wax paper or plastic wrap to generate a rain sound – maybe those even do not have to represent what they so specifically sound like. On the other hand, while the description might say “horses clopping along a paved road,” or whatever, it could also be coconut shells being pounded on an empty or sand-filled wooden box. The world of audio sources, sound effects resources and accepted Foley effects is huge, but it’s likely that each of us has incorporated one sound and its entirely unimaginable source to represent another.

Working on a recent project I needed the exact and specific sound that’s made when a radio or television signal abruptly terminates. That zapping, snapping noise of signal loss just before the silence interrupts what was being said in mid-sentence.

With an extensive library of sound effects I could not find that specific description or any alternative that by description indicated it might work in a pinch. My radio and television would not cooperate in helping me create the sound on purpose or by actually happening. I needed that sound sooner rather than later.

When all else failed I went back to my sound effects library and started auditioning certain descriptions, not the obvious differences like “jet plane taking off” or “dog barking” or “fingernails scraping across blackboard” – well, actually I did check that last one out.

I came across a zips and zingers and other oddball effects disk and found something there that, while not perfect and exact, worked for the short duration effect I needed. It came off right when used with the visual of a lost signal going to black, then white noise.

Nothing is too Weird

Nothing available to you, either by your own creation from any source you utilize or from your sound effects library is too weird to work. I got myself so geared up by working with various items I had around my home that I’ve started bouncing from one source to another with my Zoom H2 and recording the results. I’m going to spend a few hours doing this then dump the recordings into my audio editor and work them out a bit. Not only will I list them as being the sounds generated from what actually created the audio, but I’m going to add other potential sound effects uses and descriptions so when I need something particular, special or unique I have some idea of where to start searching – especially if I’m working on a deadline that is hammering me.

Even if you are not into doing things with sound effects, generally speaking, if everything you do is created from the natural or ambient sounds generated from where you recorded, you’ll be surprised at how much difference it can make by taking the time to go back through your project and see where a particular sound effect might actually enhance the audience experience.

You’ll be surprised at how much a little more effort with sound effects and audio sweetening can improve the quality of your production. How in the world do you think movies and many other video productions would be if none of them incorporated audio enhancement and special sound effects to improve our aural reactions? Pretty much like our productions if we don’t make the effort to polish them up a bit by using sound effects.

The irony of it all is that once you actually start doing this – creating and collecting your own sound effects, acquiring commercial sound effects libraries or even using natural sounds from your existing audio and video recordings – you’ll start enjoying it even though doing so might sound like more work you don’t want to have to perform.

Thinking outside the source will become fun as well, opening up a whole new level of creative appreciation for your finished product. Just remember that a sound effect isn’t always what you hear or as the source has been described – it often can be what you want it to be.

Sidebar: Use the Force

It is said that in Star Wars – Return of the Jedi, the sound engineers wanted a deathly eerie sound for the scene when Darth Vadar walks down the ramp of the shuttle as he enters the new Death Star for the first time. They looked no further than some underground tunnels near the Golden Gate Bridge across the bay from San Francisco. The tunnels were closed-off military catacombs from an earlier era. The sound guys squeezed under some gates, armed with a tape recorder and a collection of boots and props, recorded themselves walking, talking, and banging on pipes to get the electronic noise that emanates under the sound track throughout the movie, along with those scary footsteps that spell doom for Vadar’s next target. It just goes to show, when you think outside the source, you can find interesting sound anywhere.

Earl Chessher is a veteran journalist and newspaper publisher with more than 30 years experience.