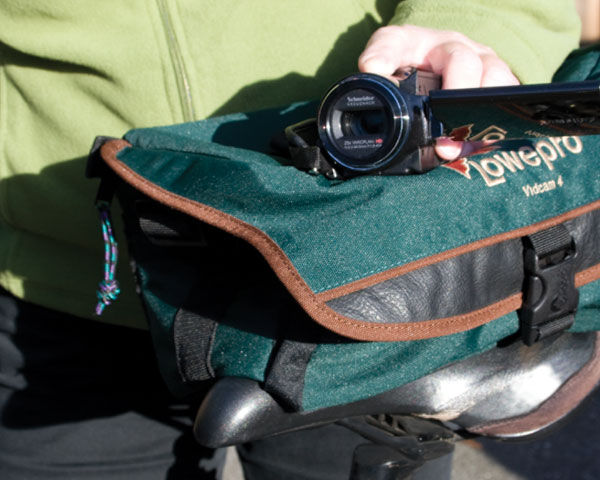 Way back in the day, people wanted to express their ideas so they invented extracts of berry and smeared it all over themselves. It was cool because they could take their painting everywhere they went. Then they started to paint on the walls, which gave them more flexibility because other people could enjoy the artwork even while the artist was out fishing. As time went on, painting the living room wall was impractical; they needed more portability so they painted on rocks.

Fast forward to the mid-1800s and along comes photography. Suddenly we could capture a “painting” exactly as we saw it. Problem was the cameras were so slow that everyone had to remain still or the picture would be blurry. They then invented tripods and soon they learned how to make movies. These movie cameras were mounted on tremendous tripods because they were so big and heavy, and clunky.

As the art of filmmaking evolved so did camera mounts. Camera mounts have become so advanced that you can now film the Space Shuttle ascending into the sky at several thousand miles per hour with an extreme telephoto lens and get fantastic results!

My, how far we’ve come. The artists with the berry extract smeared all over themselves were really onto something. All they needed was a little paint and they could take their show on the road! No tripods, no computers and no batteries; that was the life. This article is here to help you bust out of the shackles and unleash your inner cave dweller! We can’t do anything about the computers and those pesky batteries, but the tripods? Here’s some tips when you have to leave the sticks behind – don’t worry, they’ll be there for you when you need them! 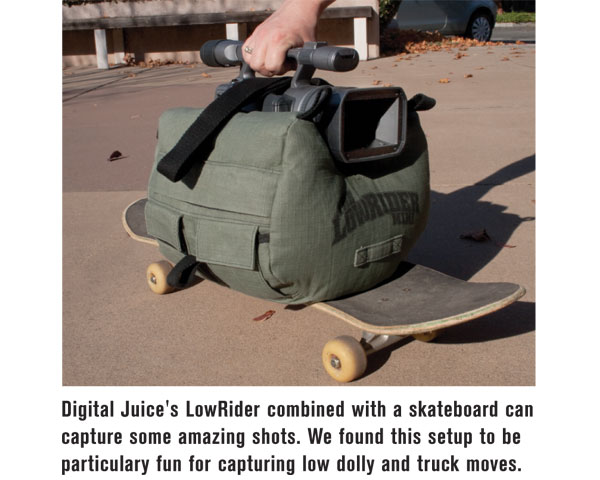 Start with a little number called the LowRider. Supplied by Digital Juice, it’s destined to liberate you from the burdens of your tripod. It’s a canvas bag upon which you rest your camcorder. With a system of straps for securing your camcorder, it’s designed especially for videographers who need a portable, versatile camera mount for shooting from anywhere, including the ground, a fence post or even a car door. It includes pockets for small accessories so you can pack things like tapes, flash cards and batteries, and features a channel stitched right into the base that allows you to rest on to the hand rail of a staircase. Once fitted to the rail, you can smoothly glide along while you record. It’s perfect for taping an interview of someone while they slowly descend the stairs. Try gliding upwards while people walk down stairs and you’ll get some fast moving traffic.

How about your skateboard as a dolly? With the LowRider you can rest your camcorder at nearly any angle including pointing down. It lets you tape an army of ants marching off to war.

Speaking of war how about a helmet cam? Yep, someone makes those too. The GoPro HD Helmet HERO is just such a beast. At $299, including a built-in camera, it isn’t cheap but you gotta figure if you need a helmet while shooting you’re probably going fast, and that means if the mount fails so does your shoot and probably your camera too! Which brings us to just how robust does a camcorder mount need to be? As robust as you can afford because any failure can result in a complete wreckage of your camcorder.

Not just for skydiving anymore, helmet cams are perfect for hands-free recording of those mundane tasks like changing your kids’ diapers. Just imagine sharing that video with your loved ones. The ContourHD offers a bullet camcorder that fully integrates a system of camera mounts including bicycle handle bar mounts, underwater housings and helmet mounts, just to name a few. This robust little camcorder can record at 60fps for smoother action than would be available in 24fps or 30fps. For those covert missions all you need is a little ingenuity along with some tape or Velcro and you can easily fasten it to an RC plane or helicopter to get aerial views of your neighborhood.

If you’re not into buying a specialized camcorder with a mounting system just for special situations, but you still want a different view, you might try mounting it to a pole. Two of my favorite mounting accessories for smaller camcorders are a pole used for cleaning pools and a Manfrotto Super Clamp. These items, along with a tripod head, allow you to get views from places you would have never thought possible. The pole is available from your local pool supply store for about $30.00. I use the extension versions because they are sturdy, lightweight and portable. The Super Clamp, which is available at nearly any camera store or online for about $29.00, allows you to mount a tripod head like the Manfrotto Mini Ball Head 494 ($60.00) to the pole.

Extend the pole to about 10 or 12 feet, rest one end on the ground while holding the pole straight up and shoot over a crowd for a view of the main drag at your local food festival. Slowly pan around and you get a 360-degree pan of the entire event. Extend it over a small creek, holding it steady just as you would a boom mic, for a great view right down the center of the creek. If you use a system like this for reaching over sets, attach another clamp on the “handle” end. You can add a counter weight for balance to improve not only the stability but also extend the time you can hold the system. This makes a great hand held jib for a fraction of the cost and with practice you can get a smooth hand held look. Manfrotto makes a complete system of mounting studs, poles, flexible rods and adjustable plates that work with the Super Clamp. They allow you to mount your camera just about anywhere.

Take Your Show on The Road

It’s great to shoot from inside your car but unless you have a mount that allows you to shoot hands-free it can be quite unsafe. That’s where the CruiseCam in Car Headrest Mount comes in, and just as the name says it mounts to your headrest. At about $50.00 it offers cheap thrills while maintaining a simple interface. Clamp it to the headrest, mount your camera and you’re ready for high speed chase scenes complete with a few stops at the local donut shop. Of course as a responsible citizen you’ll keep your pace well within the speed limit because it’s the right thing to do and it will give you much better results.

The CruiseCam is very portable and easy to install, but that low price and handy size comes at a price. It’s not very robust so any vibrations in the car will easily be transmitted to the camcorder, but it will do a nice job when the car is moving slowly. You can point the camcorder forward for a view of the driver’s position, backward for a rearview look, or sideways for a view out either window. Point the camcorder out the window while the car is rolling slowly for a dolly effect. Try it on the passenger headrest and aim the camcorder at the driver. Mount it on the back headrest for a view of both the passenger and the driver. This versatile little unit is easy to carry in your kit and well worth the cost of admission. 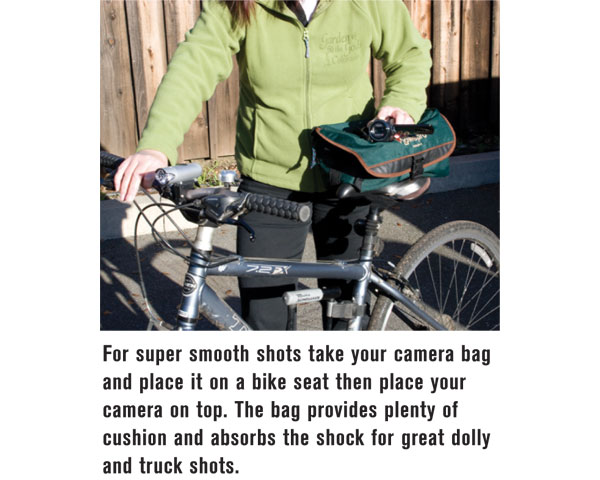 Perhaps you would like to shoot an interview with the subject walking down a hallway. You like the idea of a dolly shot, but have neither the budget or room for one. Try putting your camera on your bicycle. The POV.1.5 Ultra Clamp, for about $29.00, is compact enough to carry everywhere yet versatile enough to clamp your camcorder to just about anything. It clamps to things as narrow as 1/8″ or something as wide as 1 5/8″. Clamp it to your handle-bars and slowly roll with your subject for that professional looking dolly shot. Make sure you let some of the air from your tires and they will absorb most of the surface imperfections. This clamp is for smaller camcorders and it won’t work on a rough surface such as old parking lots or dirt roads, but on smooth surfaces or interior floors and even smooth carpet it’s a great way to track your subject. Do you have a camera bag? Try putting it on the bike seat then resting your camcorder on that. Make sure you stabilize it with your hands and enjoy steady tracking because the additional cushion provided by the bag along with the soft tires will give excellent results.

Edge of Your Rope 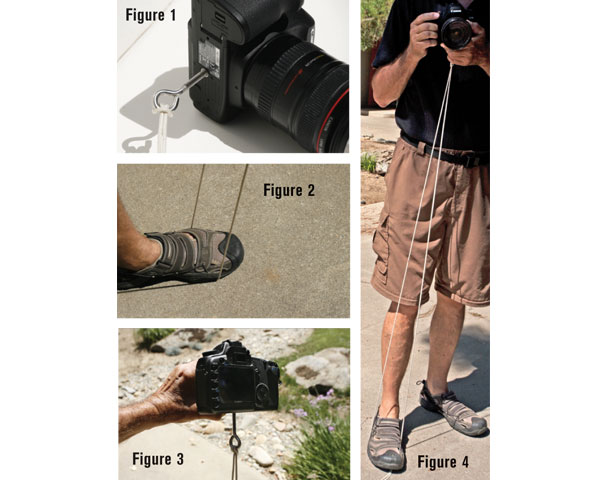 One of my favorite tricks is to use a thin rope tethered to my camcorder. You only need two items for this set up and both are cheap, easily found at the local hardware store and incredibly portable. Start with a 1/4″ 20-thread eyelet that screws into the tripod mount of your camcorder (see fig. 1). Then loop a thin rope or cord to it and stand on the loop while gently pulling the camera up (see fig. 2). The tension on the cord will stabilize your camera and allow you to follow your subject as you pan (see fig. 3 & 4).

Sometimes you must be as light-weight as possible. I recently had an assignment to shoot from a 45-foot tower. There were no stairs, just a vertical ladder. Mounted on the top of the tower was a narrow crow’s nest that could accommodate only one person. On my scouting trip, I realized how difficult a tripod or monopod would be, so I planned to use my rope system. Not only was I much safer carrying less, I was not as tired as I would have been lugging unnecessary equipment up there. I carry this system everywhere, just as I would extra batteries.

These are only a few examples where traditional camera mounts are easily substituted with alternative systems, and once you venture outside you might just find that your shooting style along with your vision can become totally re-invigorated. If you think about it, we’ve become shackled by our technological advancements. Both the newer HDSLRs and the tiny pocket cams have one thing in common – they aren’t ergonomically easy to hold for any length of time and still capture good smooth video. There are so many fantastic devices out there right now so that we can record just about anything we want and get unbelievable results, especially if we use innovative mounts for our camera. Spend a few weeks away from our own “wall,” which also has us tethered to the electricity for our rechargeable batteries, and our world comes to a screeching halt! But there’s a peaceful back-to-nature feeling one gets when not so encumbered, as if we are in tune with our more simplistic past and cave dwelling ancestors.