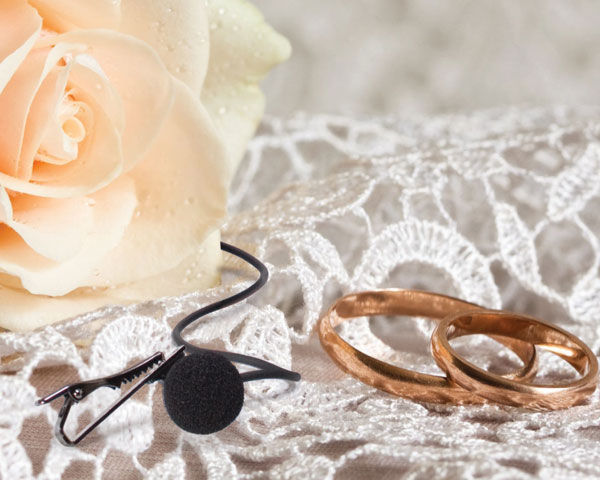 The happy couple has asked you to shoot their wedding video. It's bad enough figuring out how to shoot something useful during their outdoor nighttime candle-lit ceremony; you don't want to worry about which microphone to use for your audio gathering, right? But, of course, you have to. Even if you manage to overcome the visual challenges, the images won't be much good without sound. Fortunately, there are several time-tested tips and tricks for gathering audio at a wedding. They all require some preparation on your part, but the investment will save you some grief on the day of the wedding and, later in post.

At first glance, it might seem simple to gather audio at a wedding. Just slap a microphone on the officiant and maybe add some of the room sound with your built-in camera microphone. But what about the harp soloist or the dreadful karaoke Aunt Mildred is singing during the lighting of the unity candle? You'll need those too and a simple setup might not be enough, even if you tap into the D.J.'s sound system. It's common to mic the officiant for obvious reasons. But, it's also quite common to mic the groom. The reason is twofold: First, he's directly across from the bride and his mic should pick up the vows or anything said between them. Second, tuxedos are ideal for hiding wireless microphone packs. A jacket pocket is best, but you can hide them on a belt or under a cummerbund too. Wedding dresses aren't usually belt-pack friendly.For the rest of the elements of the ceremony, you'll need a schedule from the bride or officiant; never expect every wedding video will run the same course. This should run down, in order, everything that is happening and who is doing it. This will help you plan for microphone placement and coverage. If possible, it's also a good idea to mic the room with whatever you have available. This option gives you several advantages. The primary benefit is audience reaction. Wedding attendees will often ooh and ahh over the cute flower girl or ring bearer. If everyone is expected to stand for the entrance of the bride, you'll pick up the sound of crowd getting up in unison. Wedding audiences often laugh during the ceremony and applaud after the couple is announced. That will sound great on your wedding video. Finally, if everything else quits on you, the room recording can save your backside during the edit. So, mic the crowd.If the wedding takes place in a church or wedding chapel, ask if you can take a feed from the sound system. Assuming it works properly – and that's a big assumption -grabbing a line out of the sound system can get you virtually all the audio you need. Music, vows, prayers, poetry readings – it's all going through the sound system already, so why not let them do the heavy lifting and you just document it all on the recording? 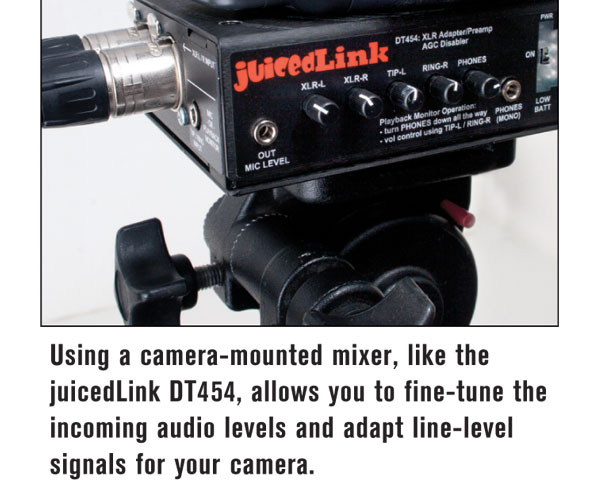 Since we're already thinking about sound system feeds, let's start with that. First things first – Always check the venue in advance to see if it works, and if it will work with your gear. The day of the wedding is not a good time to try this out. Simply plugging into a sound system isn't always that easy. Churches, civic centers and wedding chapels do some crazy stuff with their sound systems. While the mixing console may have a direct recording output, that doesn't mean you can use it. There may be technical, political or no reasons at all. Just don't assume plugging into the 'tape out' jacks will work.Once you do have a working audio output, there is the issue of plugging it into your camera or other recorder. The output signal from most sound systems is at line level and the input to your camera is probably microphone level. If you just plug in, the signal will be overloaded and distorted. Not pleasant listening – especially on a wedding video. Many cameras have a menu-based input level adjustment that allows you to choose mic or line level. Failing that, consider one of the simple camera-mounted mixers from manufactures like BeachTek, juicedLink or Studio 1 Productions. These adapters take mic and line-level and adapt it for your camera. They also offer simple volume controls to fine-tune the signal level. You attach them to the camera or between the camera and tripod. 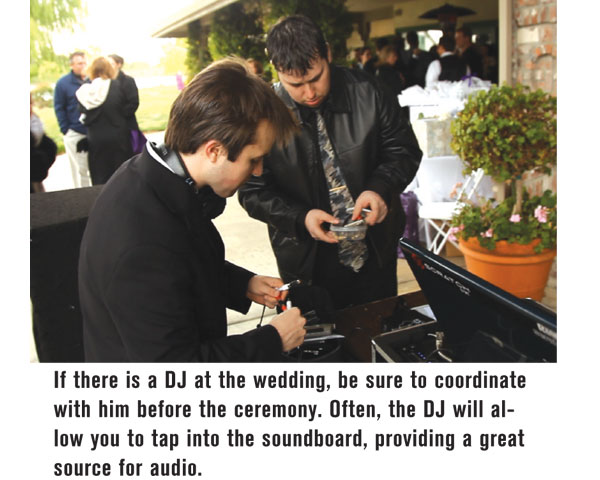 If you're making the wedding video alone – without the assistance of a sound system feed – there are still options. If you're shooting with multiple cameras, consider dedicating one camera to the wireless mic and another to the room mics. If you have three cameras, additional audio signals can go there. It takes some time for cabling but you can mix all the audio together in post. You're syncing the cameras anyway, so the audio will match too. Another popular audio gathering option is the new generation of pocket audio recorders. Zoom, Sony, Tascam and M-Audio all make excellent models – find the one that suits your production style and budget. Just plant a pocket recorder on the people you want to mic, set one mic in the room and plug one into the sound system. With these flash-based, battery-powered recorders you could have five working for about the cost of one professional wireless mic system. In post, you'll have to sync up all the recordings with the video, but once that's done, you have the equivalent of multitrack audio recording. 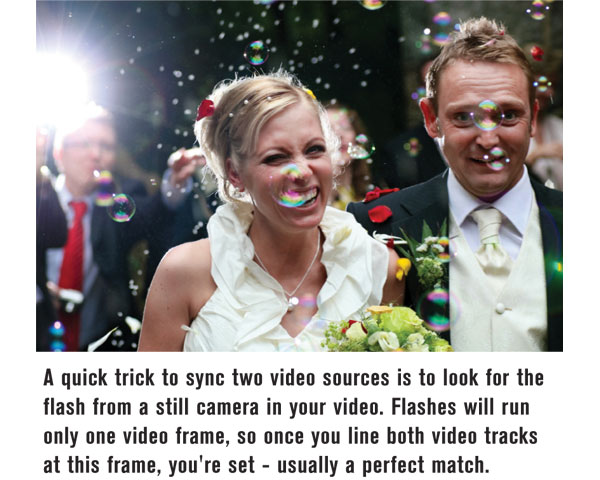 Gathering the wedding audio was a challenge, but now you have to blend it all together for the final edit. If you're shooting multiple cameras, here's one of the simplest ways to sync them in post. Several minutes before the ceremony, start recording on all the cameras. Discreetly make your way to an area that is visible by all cameras and fire off a still camera flash. Back in post, all you have to do is find the frame with the camera flash – there will be only one – and line up all the cameras to the same point in time. Simple, instant sync without timecode. When recording various audio sources on multiple cameras, this ensures that everything syncs up with very little hassle. You may still need to fine-tune, but this gets you very close.Of course, if you're recording audio with independent devices like a laptop or pocket recorders, you've got some additional challenges. We're guessing it would be impractical or even inappropriate to use a clapper-board at the wedding, so we need alternatives. If you're interested in a software solution, Singular Software makes an interesting plug-in called Pluraleyes. It installs with your editor of choice and magically syncs audio from multiple sources. I have yet to test this, but Videomaker has a Pluraleyes review and it's worth a demo download. Otherwise, you may have to tough this one out, manually syncing multiple audio tracks the old fashioned way: by ear. The trick is to find some loud event that was heard by all microphones. A cough, a sneeze, something dropped or even someone mugging the mic too close and popping a "P" sound. When you identify your signature sound, mark it and use it to sync all the audio sources. It will take some fine-tuning, but it's worth the effort.

Creative audio gathering is a challenge in every case. Adding the pressure of a wedding to the mix may fluster and frustrate you, but hang in there. We have multiple audio tools available today that were unheard of in the past and gathering high-quality sound is easier than ever. Finding the right combination of tools and technique is the Holy Grail, so start looking. It's out there.

Having multiple audio sources is great, but it also means multiple noise sources. To get a handle on your audio, some automated mixing is in order. Using keyframes and volume envelopes, it's fairly easy – if tedious – to raise and lower the volume of each track as needed. If the groom isn't speaking, why leave his mic up? In the same way, if the bride's vows are a little soft, boost them, but only as she speaks, lowering the volume when she's done. By controlling your mix this way, you gain control over stray sounds and background noises which leaves you with a much cleaner mix.