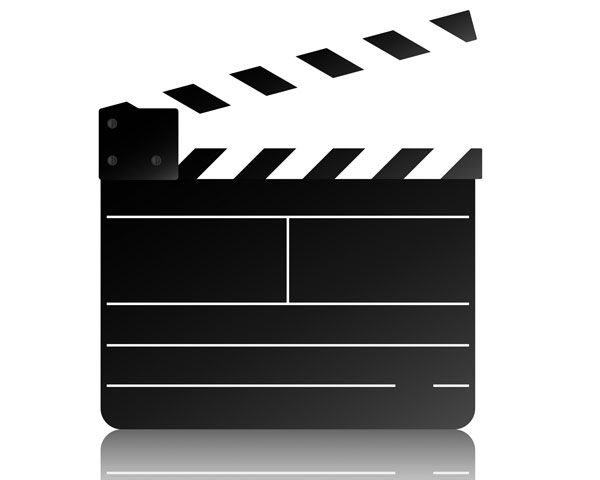 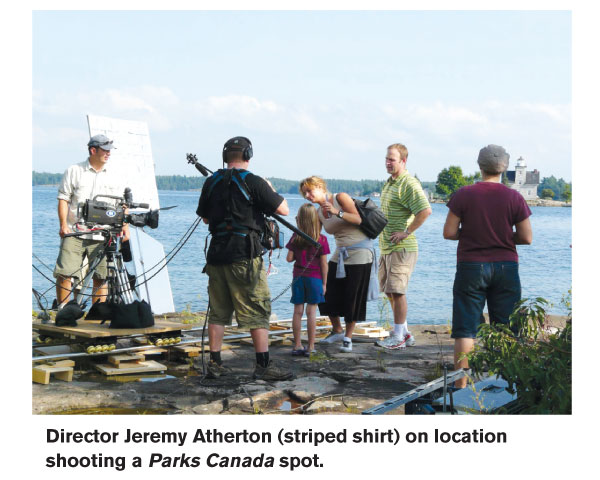 Jeremy Atherton is hauling video gear into the ground floor classroom of Algonquin College’s School of Media and Design. Freshmen TV Broadcasting students huddle around as their teacher secures the camera to a tripod and proceeds to instruct them in some basic camera operations before sending them out to shoot their first sequences. The buzz of anticipation is palpable as they sign out camera kits and fan out across campus. This is day one of EFP (Electronic Field Production) class and the tribe of aspiring shooters is pumped.

“I remember that’s how I learned, by doing, getting my hands on the gear. And that’s what I try to do here,” says the 38-year-old instructor, who a little more than decade ago, learned his production skills in these very same corridors. It was the time when computer-based, non-linear editing was just starting to emerge on the video production landscape.

With an amused smile, Atherton recalls the thrill of his very first edit on a music video assignment. As a first-year student, he had to cut his teeth on a Hi8 tape-to-tape, linear editing system.

“It was just a simple little edit, but I still remember it as an exciting moment. You hit the little button, then the pre-roll, the machines sync up and the edit happens. And I remember saying, ‘I got it’ and how you can cheat things out of sequence and all that magical stuff.”

A Town In North Ontario

Atherton first caught the movie-making bug growing up in Northern Ontario in a large family of seven kids.

“We were always making little remakes of Indiana Jones and Ghostbusters using my dad’s camera with in-camera edits long before the days of consumer editing tools.”

Although making films was the big dream, his career instincts were to follow in the family tradition of getting into business, so he studied accounting at university. He lasted about two semesters before he dove into the real world, and for about five years, worked as a ski instructor in the winter and as maître d’ at a tennis resort in the summer.

He had the time of his life in the north but as he approached the quarter-century mark he felt his circle of friends diminishing, people were moving on. It was time to follow his own dream.

“What I really wanted was to be on camera, to be a news anchor.”

So he moved south and enrolled in the 2-year Television Broadcasting program at Algonquin College in Ottawa, Canada’s capital.

Although he put in plenty of time in front of the camera on student projects, Atherton fell in love with directing and working behind the camera.

He still remembers one special student project he worked on.

“We were making a documentary about a gospel choir – one of our production team members was in the choir. That introduced me to a world I would never have known, and bringing it to wider audiences made me realize the power and control you had behind the camera. Once I saw what you can do with montages and juxtapositions, changing stories, that just fascinated me. That’s when I decided what I wanted to do with my life.” 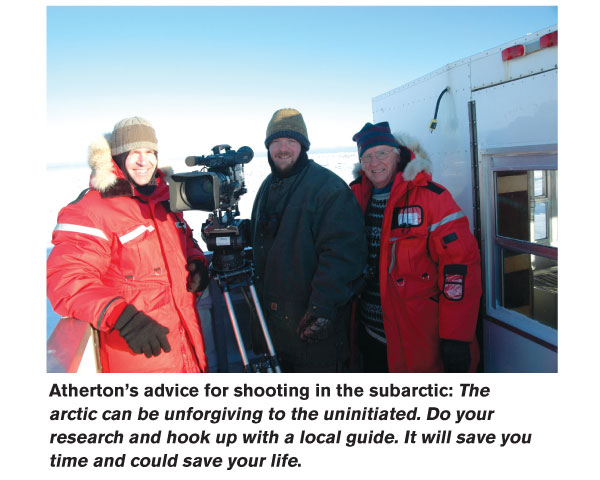 Having purged the urge to be in front of the camera in college, Atherton knew what he didn’t want to do after graduation. Having gotten that out of his system he began his career making corporate videos for family members who were all in some kind of business. A local video production company took note of his work, and hired him on as a junior producer. Seven years later he was senior producer and creative director of the company.

Ottawa being the nation’s capital, the largest client for local video production companies is the federal government.

“We did a lot of government communication work,” he recalls, and has some sound advice for doing business with government clients.

“With the federal government there’s lots of rules. So you just need to know the rules. For creative types that could be pretty frustrating because there are some really tight boxes that you have to work inside. But the fun is in being creative, trying to find a way not just to phone it in but to really push the limits that the client set for you.”

Trying to get approval of a creative treatment from one particularly difficult government department client for a civil service training video, Atherton recalls the conflict he experienced wearing two hats as director and producer.

“The director in me really wanted to push the limit and the producer in me said ‘what’s the fastest way to get to invoicing?'”

In early 2000 Atherton went independent and formed his own production company, North Channel Productions, where he produced and directed a number of film and video projects for a broad range of corporate and government clients.

Atherton admits that his formative years spent as maître d’ in a tennis resort was a fabulous training ground for becoming a business owner and independent producer who is trying manage multiple projects and clients’ agendas.

“I can relate a table to a project, so you have eight tables or eight projects and you walk into the kitchen and you might have burnt the whole dinner, but when you walk back out to the table, you gotta be smiling making sure that the clients’ experience is as good as can be. They don’t need to know that the kitchen is on fire.”

While running North Channel, Atherton got the call from his alma mater to come in and do some substitute teaching. He loved it and jumped at the opportunity when a full-time teaching position came up at Algonquin. But it didn’t take long for Atherton to realize that his students weren’t the only ones getting an education.

“When I was working for myself, I was a control freak on top of every little nuanced piece, that was my job as producer. So it’s been a challenge to let that power go and say it’s not about me, it’s about these students making their own choices on their projects. And what I think is right may not be right for that piece, and to really listen to students and trust them to make production decisions.”

He recognizes one similarity between his roles as educator and producer, and that is the importance of keeping up with industry trends and developments. However, for Atherton, teaching to the advances in technology is not the most important thing.

“It’s being able to tell what a good story is. It’s not only about being able to master all the whiz-bang graphics with After Effects – but what’s going to make a difference is, do you know how to tell a story? And is there a point to your story? What makes your story interesting enough to ask other people to come and watch it?”

If he can pass that on to the next generation of television and video creators, Atherton knows he will have done his job right.