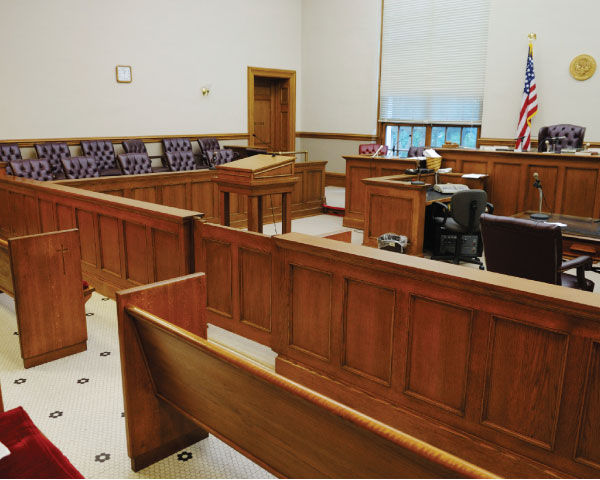 The reward one receives when producing video for the courtroom is both financial and satisfying in the knowledge that you have helped someone who has been wronged to receive some degree of justice due to an incident that has altered their lives for ever.

When we consider the subject of this series of articles by Videomaker, “Projects That Pay,” I can think of no other facet of being a professional videographer that is more rewarding than working hand-in-hand with other professionals in the field of law while producing the video evidence required by their clients.

I don’t believe there’s ever been another time when it has been more advantageous to consider changing professions and becoming a qualified legal videographer than right now. Lawsuits are flying as individuals are suing bankers, investment brokers, insurance companies, lenders and the list goes on. Some investors have had catastrophic losses because of Ponzi schemes. Many homeowners are losing their homes because of improper lending policies by mortgage companies as they sought the American dream. Keep in mind that the United States is the most litigious nation on the planet.

Right now, wedding and special event videographers are scrambling to find better uses for their equipment. Commercial video producers are finding corporations are cutting back on spending as they struggle to continue to exist. This being a fact of life in today’s economy, the field of legal videography is wide open for those with the equipment and the expertise to operate it as the profession of legal videography is rapidly exploding from coast to coast.

Being a legal videographer is not something that is new. It started back in the 1970s in Pittsburgh, PA when the Allegheny County Bar Association was faced with a very serious problem. The “expert” witnesses (mostly doctors) rebelled against the court orders to appear in court by refusing to show up at trials just to sit there for days, abandoning their own patients, while waiting to be called as a witness. It was then that the Bar Association, under the leadership of Attorney Seymour Sikov, formed a sub-committee to research the feasibility of taking the testimony of the doctors by video.

Video recording them ahead of the trial, rather than having them actually appear live in court, proved to be the answer. It worked great, except for the logistical problem of moving heavy 3/4 inch video equipment (state-of-the-art in those days) and auxiliary lighting in and out of the facility where the deposition was being held. It wasn’t until JVC came out with 1/2 inch VHS tape in the mid-70s that the concept became feasible, especially with the advent of the all-in-one “camcorder.”

Legal Videography: Not a Niche

I need to eliminate the myth that legal videography is just a small niche in the field of videography. Nothing could be further from the truth. The field of legal videography is so vast that no one videographer can possibly cover all aspects of the profession. Anyone entering this exciting field will soon learn that attorneys all over the country are desperately in need of qualified, professional videographers to produce the many different types of video that have become common place in the practice of law today.

Today, legal videography has expanded greatly into all aspects of civil and criminal law including, but not limited to, shooting documentaries such as “activities-of-daily-living” (ADLs) and “mediation” videos, scenes of incidents, proof of damages, video recording of the will execution ceremonies, pre-and post-nuptial agreement signings, pre-and post-construction documentaries, evidence of insurance fraud, and the list goes on and on.

Keep in mind legal videography really started with the video recording of depositions. These are normally taken during the discovery phase of litigating a lawsuit (prior to trial). They are still the type of legal video that opens the doors to all the other aspects of legal videography that have now become so popular with the trial attorneys. Normally, the videographer can gather all the information they need to be able to sell the video documentaries to the trial attorneys when they have sat in on the testimony while it is being given during a deposition.

An important factor that video producers planning to specialize in legal video need to keep in mind is that the attorneys are not the experts when it comes to producing the video evidence that is to be used in a court of law. They fully expect the video producer, representing him or herself as a professional legal videographer, to thoroughly know and understand the rules that must be followed when producing testimony under oath. This simply means they must be thoroughly familiar with the court-approved rules of civil procedure and of evidence.

The Most Exciting Aspect of Legal Videography

Here is where the creative juices of the videographer can come into play in a meaningful way. The legal videographer will quickly learn there are certain things that will not be allowed to be shown to a jury. For example, extreme agony and pain, or the showing of the bloody destruction of the human flesh will not be tolerated in an ADL. It would be deemed a deliberate attempt to play on the emotions of the jury. Specific rules, like this one, is why it becomes vitally important for legal videographers to receive the proper training.

We have been asked if the courts demand that the legal videographer be “certified” and the answer is “no.” Not one court in the nation is requiring certification at this time, but it is sure to happen, just as court reporters are now required to be certified. The next question is, “is certification necessary?” The answer is, “yes,” as it is the attorneys that are requiring the certification of the videographer they retain. They want to make sure that the product the videographer produces will not be impeached and thrown out of court on a technicality.

Even though the Federal rules are accepted in every court in the nation, each state, district, and individual court operate under their own approved rules. Unfortunately, many times the attorneys are utilizing videographers who have been doing legal video for years, but doing it incorrectly. Videographers are getting by with it because the attorneys expect the videographer to be the specialist, not themselves.

Currently, there are two organizations in the United States that are certifying legal videographers. The American Guild of Court Videographers (AGCV) trains and certifies their members in all aspects of legal videography, and the National Court Reporters Association (NCRA) also certifies legal videographers, but only in the area of most interest to court reporters and that is in taking testimony under oath. Costs of becoming certified should not be a factor. The small amount of money that is required will be back in the pocket of the videographer with their very first contract. Both organizations are available through the web.