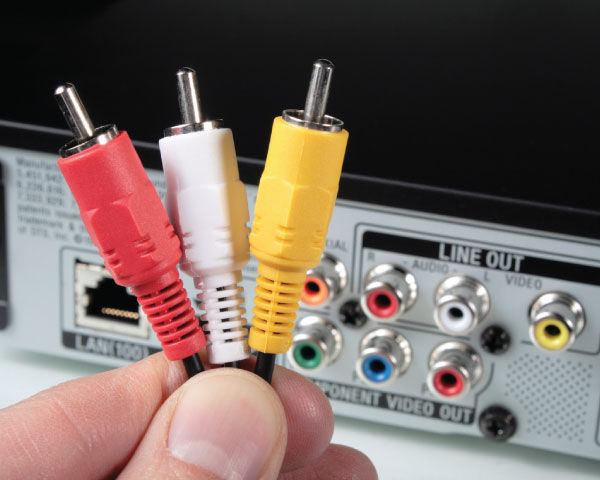 Recently, when Great Aunt Whinnie was named the Explorer of the Year by the St. Elkings Dog Sled Club she asked if I’d help with a video of her acceptance speech. She planned to be in the Antarctic during the awards banquet tagging macaroni penguins, but wanted to personally thank some of the members and torment various others. I brought my video camera and some lights over but no, she said she’d already recorded her speech and handed me a box of VHS tapes.

“It’s in there somewhere,’ she said, “along with footage of me wrestling a walrus. You should put that on YouTube.”

“You already recorded your acceptance speech?” I asked.

“Of course,” she replied, “in 1987. Those dopes have taken their own sweet time giving me this award.”

And with that, she loaded up her dogsled and was off leaving me wondering how to get her speech to Oslo and her Walrus wrestling to the Internet.

It’s always a good idea to have legacy equipment that will play every format you still have footage in – which means don’t throw out that Hi8 camcorder if you still have a closet full of birthdays recorded from it. You can still get VHS players new, but that won’t always be the case, it’s better to spend $45 now on something new that sits in a box in the basement than it is to fight for something used on eBay in ten years. Family tapes that may seem dull now will be priceless when your children are grown up and moved out. Transferring your old footage to digital medium is not only a good idea from a preservation point of view, but it’s essential if you want to edit your footage. 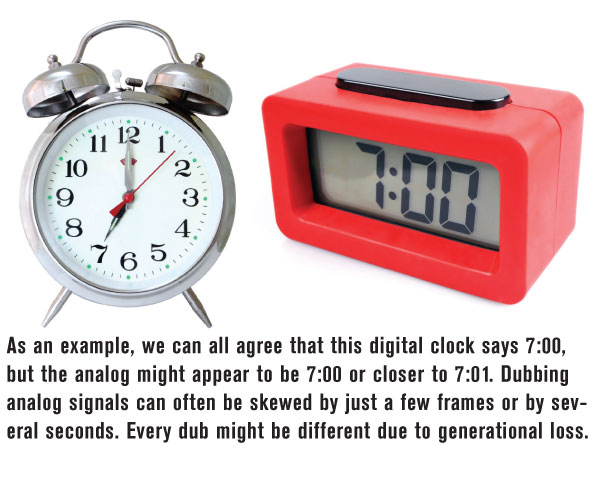 We use the terms “analog” and “digital” a lot, some people may be unclear as to what they mean and why one is better than the other is. The easiest example of the difference between analog and digital is the most familiar – a clock. An analog clock is one that measures value across a continual scale, the hands move from “1” to “2” by proceeding through all the space in between where as in digital, where things are expressed by a discrete value, “1” turns directly into “2”.

Because copying analog values is inexact (you look at the clock and see five minutes past three, someone else might read it as four, another as six) each time copies are made, errors are introduced. Looking at a digital clock, everybody agrees on the number.

“Generational loss” occurs each time an analog tape is duplicated because the values are not read back exactly the same way every time. Imagine going into a room, looking at an analog clock, then manually setting another clock based on the first, each time you do this, there will be a slight error in one direction or another. Digital can be duplicated again and again without error; each copy is exactly the same as the original.

But digital’s strength can also be its weakness – if the sampling rate is too slow – imagine a digital clock that displays only hours and minutes but not seconds – analog media can be more accurate. You can try outputting audio tracks on your non-linear editor at various sampling rates and see for yourself when you begin to notice a degradation in sound quality.

Analog requires much less sophisticated equipment than digital – Edison made his first analog recorder out of little more than a pin, a horn, and a bit of tin foil. Digital playback and recording requires microprocessors and, as digital technology is advancing at such an incredible rate, formats change rapidly. The format you digitize into your computer today might not be useful tomorrow. Which means plan an upgrade strategy for all your existing digital footage and, when practical, keep important analog masters.

How Much Digitizing Do You Need to Do?

One thing to take into consideration when shopping for an analog-to-digital (A/D) converter is the amount of footage you need to convert. Will you be using short bits from your analog tapes, or do you want to convert everything? Will this be part of your every-day video editing system? (Are you currently shooting an analog format with no plans to upgrade?) Do you need to support balanced audio (XLR) in? Do you want the ability to move digital video back to an analog media?

Types of Analog to Digital Converters 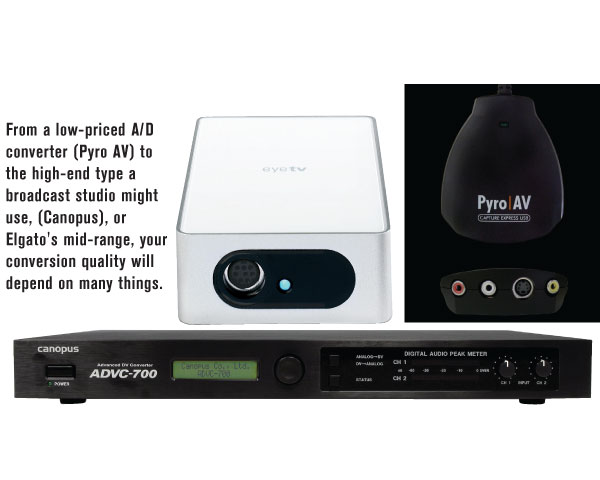 There are many A/D converter boxes that interface between legacy equipment and your computer with a wide range of prices and features. These can either be cards, that fit internally into your computer and provide a permanent solution, or boxes that attach via USB or FireWire that are more easily removed and stored when not in use or shared between computers.

The Pyro AV Capture Express USB, for example, connects to your computer via USB. It’s about sixty dollars and will convert your analog signals to 720×480 NTSC digital, it has both S-Video and composite in and comes with basic editing software.

Things get more complex from there, depending on what your needs are. Elgato’s Eye TV 250 Plus Digital/Analog TV Receiver and Video Converter, for example, which sells for less than $200, adds a whole host of other features. It will allow you to play and receive broadcast TV signals, as well as analog and digital cable on your Mac computer, included with built in hardware compression for capturing video from the air, even exporting it to your iPod or iPhone.

Still more sophisticated are professional devices such as the ADVC700 from Grass Valley, which is designed to be used in broadcast studios. It costs just under $2,000 but has a host of features lacking in most consumer grade products. Including both XLR and unbalanced audio inputs as well as component, S-Video inputs, and on-the-fly image enhancement.

Connecting and Digitizing Your Video 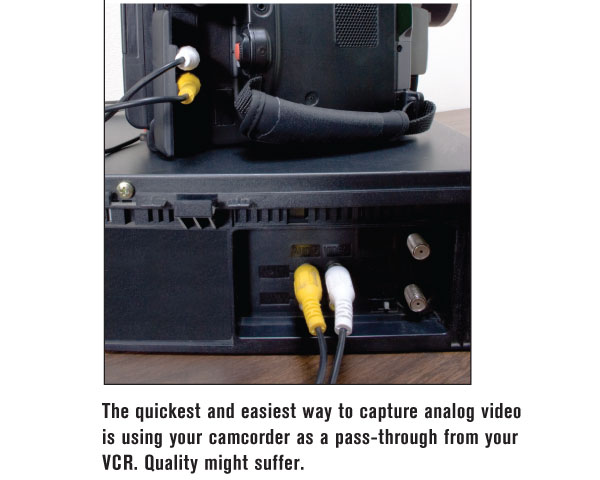 There are several other ways in which video can be digitized that you may consider.

Digitizing Through a CamcorderMany Digital8 and DV camcorders have analog inputs which will allow you to use them as an analog-to-digital converter, either as a play-through device or by re-recording your analog footage on Digital8 or mini DV. The latter is not a bad idea as Digital8 and mini DV are both easier to store than VHS. If you have one of these camcorders, you may be able to use it to capture your video without purchasing additional equipment.

The Most Inelegant Solution

If you find yourself in a panic to get something on the Web quickly and are without an analog-to-digital converter you can actually just play your source on a television in a quiet darkened room and then re-recording it from the screen with a digital camera mounted on a tripod. If you’ve ever seen a pirated movie you’ll know that the downsides of this involve bad sound (including room noises), the imperfections of the TV screen, reflections and color desaturation. But for getting Aunt Whinne’s walrus wrestling video on YouTube with a minimum of fuss, that’s what I did. Don’t tell anyone.