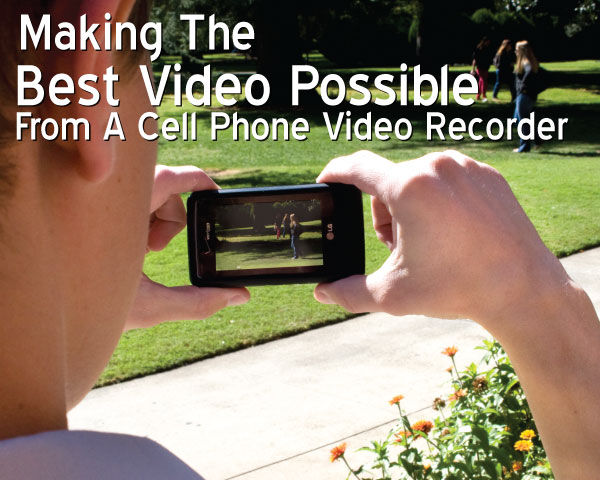 A good way to get the best footage from a small cam is by considering those basic shooting habits from the days of the big VHS video camcorders; What you get at the end of the day is what you have to live with. Add to this the fact that the standard resolution of most videos taken from cell phones is nowhere near as good as those portable camcorders, and shooting with an eye towards creating the best video possible becomes even more important. So here some basic rules that will improve the quality of the video being shot from the outset. Portable video camcorders are all about being on-the-go and shooting video at a moment’s notice. These “one-trick pony” devices have been overtaken by cell phones, which have added shooting video to their more than just making a phone call repertoire.

Since we all pretty much carry our cell phones with us all the time, the convenience of being able to use them for shooting video can’t be overstated.

But by their very nature, the quality of the video leaves much to be desired. Since cell phone video recorders shoot at fairly low resolutions and do not have the same level of sophistication as that of their stand-alone camcorder cousins, it’s important to try and remove potential problems before they can occur during the shooting. Not to mention avoiding bad habits that can lead to sloppy looking video.

Light Up The Scene 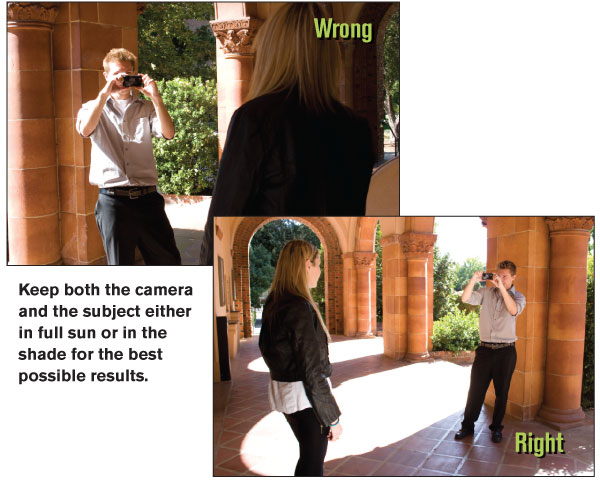 Lighting affects the quality of the video. Video camcorders have systems built-in to handle extremes in brightness and contrast, but cell phones for the most part have only the most basic of these modifiers, if at all. So keeping the sun behind you to avoid glare makes a lot of sense, as does avoiding shooting in dim light whenever possible (since the camera sensor will create a lot of “noise” trying to pull up detail).

Of course shooting into shaded areas outside occur with regularity, although the scene will be dimmer compared to bright sunshine. For those occasions it’s better to enter into the shaded area so that the camera sensor fully enveloped and can adjust for the light level. This will be preferable to shooting “into” the shade as the cell pone will be adjusting for the greater brightness and the differences between the intensity of light between what the cell phone is in versus that which the camera is attempting to shoot will only increase the level of contrast and make the scene appear more harsh.

Focus is another issue that must be taken into account. The cell might be able to set the focus prior to shooting but its fixed once the shooting starts. Being aware of this means trying to keep that which is being shot (if people or other live action) on a horizontal plane. This will also help compensate for speed and minimize blurring. Movements towards/away from the camera will not hold focus as well, since depth of field is mild, and result in greater out of focus video.

To Zoom or Not to Zoom 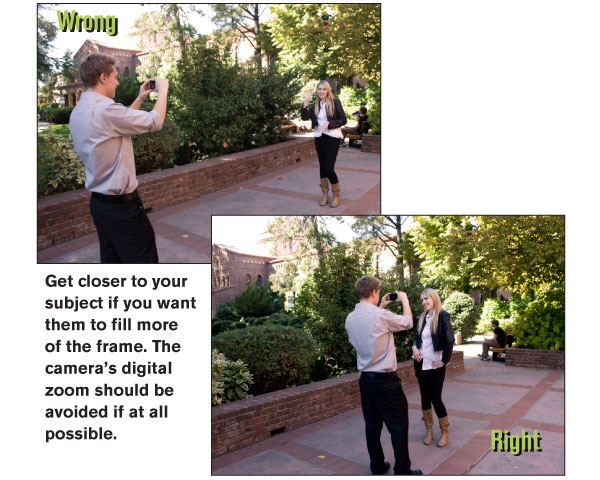 Unlike a video camcorder, a cell phone will have a small amount of zoom available – if at all. This zoom will come courtesy of digital technology, which by its very nature degrades the quality of the image because it is not moving in closer to what is being shot, but is just magnifying the pixels. Consider just moving closer to the area of interest instead of zooming if possible, since this will keep the resolution of the video from being negatively affected.

Steady As She Goes 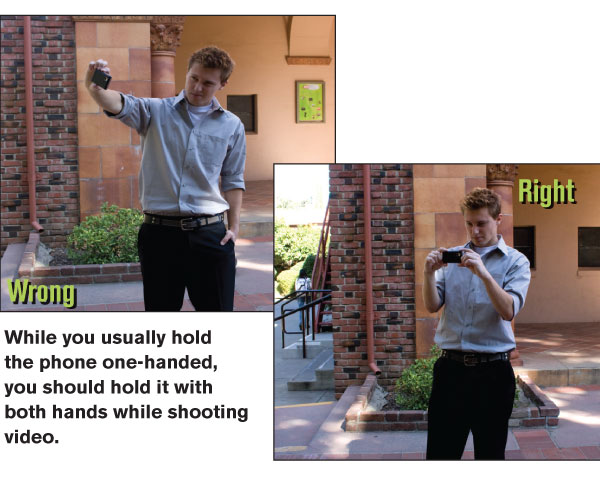 It’s a sad fact that the smaller the video recorder, the more prone to vibration it is. In the case of a cell phone, too many people are used to holding it with one hand while taking a photo and this translates into shooting video this way as well. The amount of shake that results can cause the image to blur. None of which is helped by the fact that the video is being shot at 30 frames a second at the best (many recording less frames than that), being more prone to a negative response to induced motion compared to the 60 frames a second found on better camcorders.

The best way to hold the camera, regardless of whether it is vertically or horizontal (as is the case with the new iPhone 3G S), is with two hands close to the body. Add to having the legs extended for a better center of gravity, and you’ve a solid stance which lets you pan the cell phone while shooting with little twists of the body. This avoids bumping the cell as you’re moving and makes for a smoother pan.

This position also lets you work the video controls (be they hard buttons or touchscreen) without jabbing at them so that the start and ends of the video can be smooth as well.

The last resort for improving the video shot is in post-production; using computer software to adjust and alter the video in minor or significant ways. Thanks to faster computers and improvements in software, being able to alter a video “after the fact” is now fairly easy. And with results worth the trouble.

There is video software designed at both ends of the spectrum (amateurs/professionals) and priced to match for both PC as well as Mac users. For example, on the Macintosh there’s iMove (a part of the iLife software suite that comes free with the computer). iMovie is easy to use, if wrapped around a fairly sophisticated interface, and allows for the basic adjustments most understand – such as brightness and contrast levels. And of course editing. Correcting skin tones is another area that should be considered – few cell phones shoot white-balanced video, and so the result is that skin tones tend to go either towards the blue or the yellow side.

One feature in iMovie that can be of great help is Video Stabilization. iMovie can take a video clip and reduce the amount of camera shake by “smoothing” out the video in a non-destructive fashion (i.e., it doesn’t alter the original video but creates a copy instead). This works best for short clips, and those where the shaking is not extreme, but there’s no denying that it’s a powerful and useful tool for improving the video shot from a cell phone. Techniques such as this, as well as others, applied to the video can be of great help for improving its overall look.

Look Back To Move Forward

Sometime you have to look to the past to improve the present. For all the 21st technology that a cell phone video can bring to bear, using well-worn techniques for shooting video can help to make those spontaneous and great video moments worth looking at.