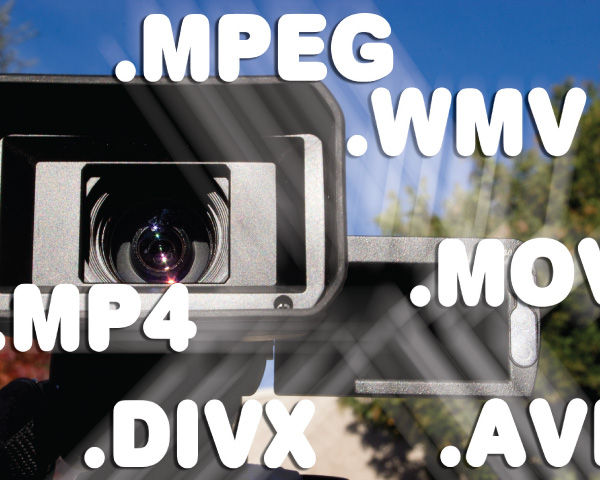 In the not-too-distant past, VHS was the de facto standard in video viewing. Oh sure, some people might have had 8mm or Hi8 players too, but everybody had a VHS machine. If you wanted people to be able to see your latest creation, you’d just put it on VHS, stick it in an envelope and drop it in the mail. No brains required. Ah, but then digital came along. Suddenly, there was a plethora of formats, all of which did different things, and not all of which worked with everything else. People are now not just watching video on televisions, but on iPods, computers, portable devices, and even wireless phones. The right video format for one isn’t necessarily the right one for the others.

This month, we’re going to look at some popular video formats, viewing platforms and distribution methods to help you figure out the best method to get your video from a camcorder to your audience.

Windows Media Video (.wmv): WMV was developed by Microsoft, and a player (Windows Media Player) ships with Microsoft’s Windows operating system. Because of the near ubiquity of Windows, WMV is often a very good format for making your video readable by a large number of people. WMV players also exist (for free) for the Macintosh operating system.

QuickTime (.mov): This format was developed by Apple, and a player began shipping with OS 7. A free version is available for Microsoft Windows.

DivX (.avi, .divx): DivX is a very popular codec for compressing MPEG-4 videos. The size difference between DivX and an MPEG-2 encoded DVD is a factor of about ten, which makes it a very popular way of encoding large videos that need to be transferred over the internet. The codec can work as a plug-in for existing players such as Windows Media Player.

Moving Picture Experts Group (.mpeg, .mpg, .m4p): MPEG was designed for compressing video frames along with audio. It’s able to get excellent compression by grouping frames together. DVDs use a form of MPEG compression called MPEG-2. Another format developed by MPEG (MPEG-4) is capable of producing better compression and supports digital rights management, making it a popular format for computer viewing. Apple’s iPod players use a version of MPEG-4.

Audio Video Interleave (.avi): Developed by Microsoft in the early 1990s as part of the Windows Video format, AVI is still very popular today, especially when partnered with a compression codec like DivX. 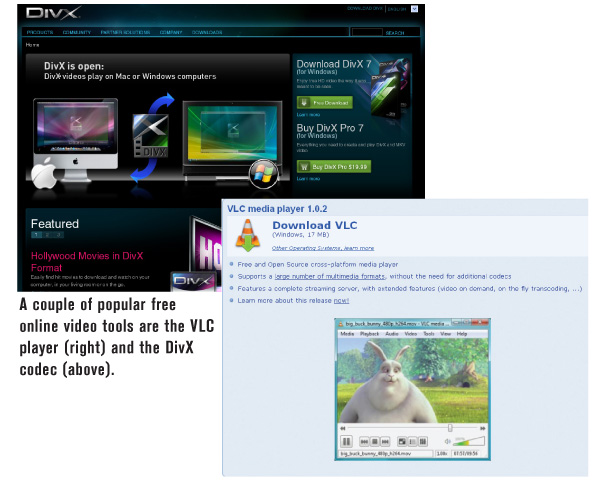 Once you’ve encoded your video, there are many methods that people use to view them. One of the things that will help you figure out which encoding method to use is how you expect people to watch them.

Obviously, people watching videos on a DVD player with a 50-inch television and 5.1-channel surround sound have very different needs from those of people who are watching video on their iPhones. Figuring out how your audience will use the video files is the first and most important thing when you are preparing to export them.

DivX: The DivX player, available from www.divx.com , is available for both Macintosh and Windows.

VLC Media Player: This media player is available for many different operating systems, including Windows, Mac OS X and multiple versions of Unix. It’s open source and free, which helps to make it very popular.

QuickTime: It plays .avi, .mov, and mp4 files. QuickTime comes with the Macintosh operating system, and a free version is also available for Windows. QuickTime Pro, a more fully-featured version, needs to be purchased.

Windows Media Player: This comes with Microsoft Windows, and a free version is available for the Apple Macintosh operating system. 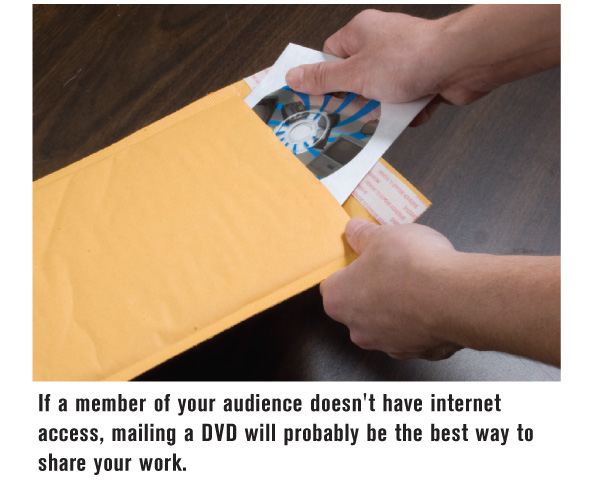 Now, instead of putting a VHS tape in a padded envelope, you have multiple options for distributing your video – from e-mailing very short clips to sending a DVD via the postal system to uploading to a host like YouTube or using a public FTP site like yousendit.com. The size of your video and its intended final destination are going to have an impact on which works best.

By far the easiest way to get a short video to multiple people is uploading to a service like YouTube. With a basic account, you can upload a video that’s less than two gigs in size and ten minutes in length and is in .avi, .mpg, .mov or .wmv file format. (A “director’s account” will let you upload longer and larger files.) A video on YouTube can be public (world-viewable) or private (limited to 25 invited users).

Most people have DVD players, and, for longer videos and high-quality videos, burning a DVD is usually the best way to get your masterpiece seen.

Small video files, like a heavily-compressed MPEG-4, can be sent via e-mail. Most e-mail accounts, such as Gmail, will let you send a file up to 25 megabytes in size. Be sure to check with the person you’re sending the video to first.

When distributing large files, you can simply upload them to a directory on your web page and send people a URL. From there, they can download the file and play it on their computers.

“Streaming” is a method by which video is downloaded and played at the same time, in the way a TV broadcast works – they send a signal, you watch it; you don’t need storage media, just a receiver. This is a big benefit, but it also means your viewers can’t save the file. They have to go back to the source every time they want to watch it.

Formats that can support streaming are Flash, MPEG-4, QuickTime, Real and Windows Media.

As the methods people use to watch video have changed from sitting in front of the television watching prepared shows to watching home-produced content of varying lengths on not just TVs but on computers, web browsers and handheld devices, the mechanisms and requirements for video materials have become more complicated.

Using commonly-available applications and popular video formats such as QuickTime and Windows Media may ensure that the most number of people can view your video files in the quality in which you want them seen, but often the convenience of a service like YouTube is the best option. The key to making that decision is knowing who your audience is and how your file will be viewed.